Molly McCann has seen both sides of the UFC coin, and she's motivated more than ever to put on a show in her first fight in America.
By Gavin Porter • Jun. 20, 2019

Molly McCann is as tough as they come, plain and simple.

In just two UFC fights, we’ve seen her choose to get put to sleep by rear naked choke rather than tap and we’ve seen her fight through a fractured orbital bone to earn her first UFC victory. That’s a dramatic start to a UFC career.

It just goes to show McCann’s heart and her willingness to leave it all out in the Octagon. Don’t expect anything different from “Meatball” when she takes on Ariane Lipski at UFC Greenville.

“People might have a lot of stuff over me but what they’ll never have is will to win and heart,” McCann said. “You can break my arm, you can break my orbital, I can have a broken hand, you can be kicking me, but I’m still going to keep coming.”

After losing her UFC debut in her hometown of Liverpool, England, McCann needed to take time to find herself and recalibrate. She was very candid about how the loss affected her, and how it humbled her leading up to her fight in March.

Those trials and tribulations paid off for McCann, as she powered through injury and adversity to earn an impressive win over Priscila Cacnoeira. And just like that, it was on to the next one.

Fighting in the United States of America has always been McCann’s dream, and when she found out that she was traveling to South Carolina she couldn’t have been more excited. 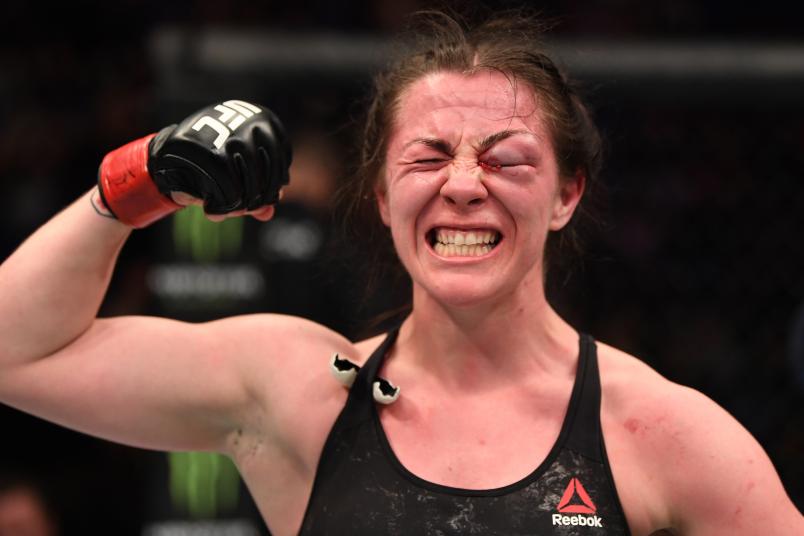 LONDON, ENGLAND - MARCH 16: Molly McCann of England reacts after the conclusion of her women's flyweight bout against Priscila Cachoeira during the UFC Fight Night event at The O2 Arena on March 16, 2019 in London, England. (Photo by Jeff Bottari/Zuffa LLC/Zuffa LLC via Getty Images)

“Americans probably won’t understand, but to fight here, it’s such an honor for a European or for anyone else from anywhere else in the world,” McCann said. “The fighting capital is America. Honestly, what a privilege. When I got that text I was like, 'Oh my god, my dreams are coming true.’”

That UFC dream is something that started after McCann saw Ronda Rousey fight Liz Carmouche. And while she’s still chasing her dream, it’s safe to say she is on the right path.

In March, McCann became the first female English fighter to win in the UFC, but she can’t help but feel like a win over Lipski would justify everything that she went through to get to this point. Lipski is a highly touted prospect and would show the world just how far McCann has come since she picked up mixed martial arts just over six years ago.

Now that she has two fights under her belt, McCann feels more confident than ever.

Make sure to tune into ESPN+ to see if McCann can earn her second win in a row over a tough opponent in Lipski.