"I’m going to hit ‘em in the head with some elbows and some punches. Make it blood and make it ugly. I like those fights, those are the kind of fights I’m into.”
By Gavin Porter • Mar. 20, 2019

The road to the UFC is different for every fighter. For UFC featherweight Bobby Moffett, it took over a decade of trials and tribulations mixed in with two big shots on shows produced by Dana White to make it into the Octagon.

But he made it and now that he’s here, he isn’t looking back.

“It was just an amazing year this past year,” Moffett said. “It was life changing you know?”

In 2018 Moffett fought five times, starting the year off with a disappointing loss in the LFA promotion. But he quickly bounced back by stringing together two wins in a row, one of which that was featured on Dana White: Lookin’ For A Fight. That win grabbed the attention of UFC President Dana White and earned Moffett a spot on Dana White’s Tuesday Night Contender Series.

“Wolfman” made the most of that opportunity too.

He would go on to earn a UFC contract after defeating Jacob Kilburn by submission. The victory secured him a spot on the UFC’s 25th anniversary card in Denver, Colorado. And although his fight with veteran Chas Skelly would end in some controversy, Moffett would not be denied.

See the trend? Moffett attributes that success to the constant desire to evolve and his determination.

“I love fight camps because I get to learn new things and get to really evolve,” Moffett said. “I’m improved some of the striking that I’ve been working on over the last two years with Eddy Cha. My hunger really makes everything easier and it makes training more fun.” 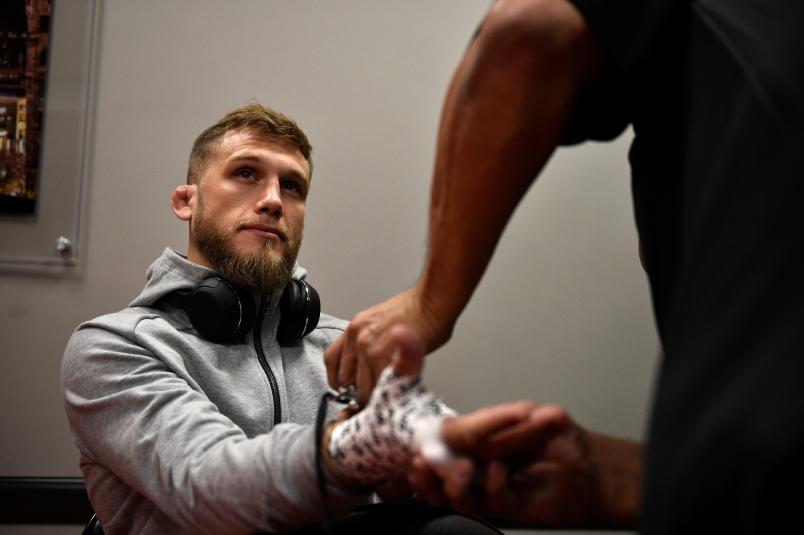 Moffett’s next challenge comes in the form of former TUF 27: Undefeated contestant Bryce Mitchell at UFC Nashville. Both featherweights are up for a brawl and that is something that excites Moffett about this match-up.

“I like to come forward I’m a pressure guy,” Moffett said. “Put punches on peoples face, take ‘em down and choke ‘em. If they don’t get choked then I’m going to hit ‘em in the head with some elbows and some punches. Make it blood and make it ugly. I like those fights, those are the kind of fights I’m into.”

He is well aware that Mitchell is a tough guy and he is expecting Mitchell to come prepared on Saturday.

“He’s a good wrestler, good at jiu jitsu and he’s willing to throw some wild punches and wild kicks to get the job done,” Moffett said of his opponent. “So I think overall he’s a tough guy, but I think overall I’m better than him at striking, I’ve got more endurance than he does, and I’m a better wrestler and better at jiu jitsu. I think he’s going to run into a brick wall and I’m just excited to choke him.”

Moffett and Mitchell headline the UFC Fight Night: Thompson vs Pettis prelims on ESPN+ which starts at 5pm/2pm ETPT on ESPN+.