Modestas Bukauskas was as comfortable as a seasoned veteran when he made his UFC debut
By Thomas Gerbasi, on Twitter: @TGerbasi • Oct. 14, 2020

Modestas Bukauskas shouldn’t have been this cool. The Lithuanian light heavyweight was making his UFC debut against a short-notice opponent with the world watching, and you would have thought it was sparring day at the gym.

It wasn’t. But you couldn’t have told him that. He had been waiting for this moment forever.

“I must have replayed that fight in my head a gazillion times,” he said of the lead-up to his July debut. “All the feelings you get, even driving up in my car, listening to music and thinking of certain actions in the fight, playing it along to the music, I've seen it in my head so many times. So when it came to me actually stepping out there, it just felt natural. I knew that this was the next natural step in my career. I wanted to fight in the UFC, I wanted to show that I'm one of the best fighters in the world, so when it comes to actually being able to do it on that stage, it just felt completely natural.”

“The Baltic Gladiator” fought accordingly, like he had been there a dozen times as he stopped Andreas Michailidis in a single round, picking up a Performance of the Night bonus along the way as he improved his record to 11-2. Bukauskas had arrived, and yes, fighting in the UFC met his expectations.

“It probably exceeded my expectations, to be fair,” he said. “You can sit there and visualize all day long about how it's gonna go and what it's like, but when you're actually there and you're doing the whole thing, it adds a very special feeling to it, not quite like any other fight that I've been in. When you've got Bruce Buffer calling out your name and screaming it there, and you see all the commentators and all these people, you realize it's real. It was absolutely amazing. I embrace change, I embrace having pressure situations and bright lights, and when it came to the night, I just loved every minute of it.”

For fans of the 26-year-old, who now makes his home in London, this was all expected from the former Cage Warriors champion. He had impressed on the regional scene, got over the couple hiccups on his record, and with a six-fight win streak, it was no surprise that he got the call from the UFC and made good on his promise with a big debut win. Bukauskas was equally confident, but that wasn’t always the case, as he tells of a friend of his that he’s known since high school, and the words of wisdom he got from him many years ago that he’s never forgotten.

“He was the guy that told me I need to be myself and don't care what people think,” Bukauskas said. “Ever since that day, I've started embracing just being myself and letting my character come out and doing more scary things and not letting things shake me too much.”

Professional prizefighting is pretty scary, but the 205-pound prospect has made it less intimidating just by living life, both in and out of the Octagon. 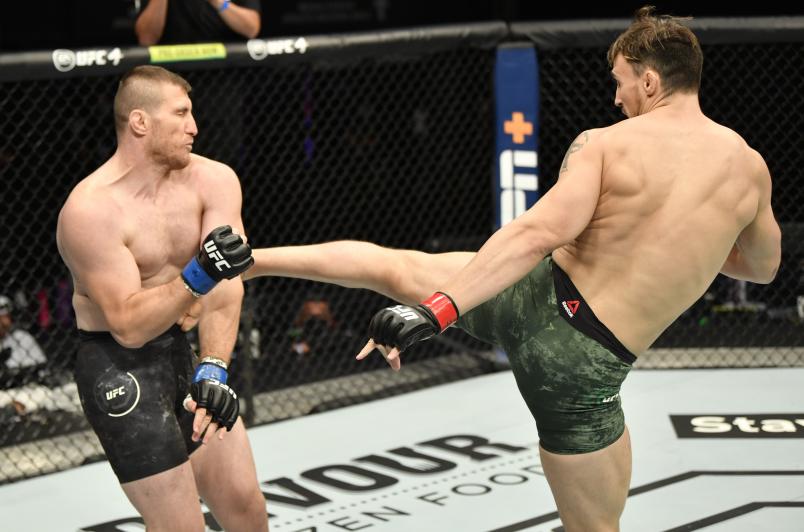 “This is just another day, and it just brings me more excitement,” he said. “The fear turns to excitement, as opposed to the fear overcoming me and making me shy away from these big things. This is life and you've got to learn to love these feelings.”

Bukauskas loves them so much that he accepted one of the scariest bouts a 1-0 UFC fighter can take – a Saturday showdown with fellow rising star Jimmy Crute. Australia’s Crute, a winner on Dana White’s Contender Series, is already 3-1 in the big show with finishes of Paul Craig, Sam Alvey and Michal Oleksiejczuk. But when presented with the fight, Bukauskas didn’t blink.

“You've got to take risks in life and you've got to believe in yourself and believe in your abilities,” he said. “I'm gonna have big challenges, I'm gonna fight the best fighters in the world. I can't get out of that. So why not fight them now? And the thing is, I feel I have the skill set to overcome and beat those guys now. So I need to go ahead and do it. And the thing is, you beat a guy like that, you're gonna be in the top rankings of the UFC straight away.”

Bukauskas had that intangible star quality long before he made it to the Octagon. The only question was if he could fight at the UFC level. He proved that he could, now he wants to keep proving it, and this weekend’s bout with Crute could be a career-altering one should he leave Fight Island with a win. He knows it, too. And he likes that idea.

“Jimmy Crute is an amazing athlete, a very good fighter and very well-rounded,” Bukauskas said. “He's definitely gonna be the toughest opponent I've had to date. But I do feel I have the skills required to go and overcome him also and beat him. I reckon it's still gonna be an absolute war and it's gonna be an absolutely amazing fight for the fans to watch but, at the same time, there's only one outcome and that's gonna be me coming out victorious.”