MMA in NY: The Fight Continues

"The New York State senate has passed it, now it’s up to the New York
State Assembly, and we need to get it on the floor. And I know if we get
it on the floor, we will pass MMA." - Sen. Jose Peralta 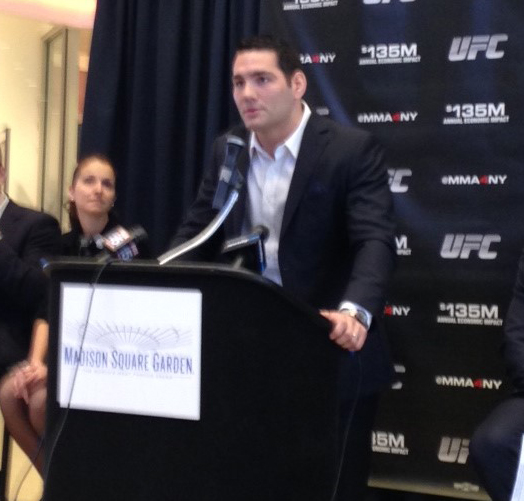 NEW YORK, November 21 – Let’s not mince words here. It’s now at the point where the refusal of New York politicians to sanction mixed martial arts in their state is simply laughable.

With 49 states already sanctioning the sport, with New York in dire need of the financial boost a UFC event would bring, and with the fans, fighters, and a good number of the aforementioned politicians eager to see MMA in places like the site of a Thursday press conference discussing the issue – Madison Square Garden – it baffles the mind that this hasn’t been done yet.

“If you would have asked me back then, what do you think will happen first, MMA regulated in New York, or Madison Square Garden goes through a hundred percent complete rebuild, I would have said MMA of course,” said UFC COO Lawrence Epstein of the fight that began on December 1, 2007. “But the folks here at MSG beat us.”

The assembled media at the Garden laughed, but seeing the sport continuing to be outlawed in the Empire State isn’t funny to those involved, especially fighters like UFC middleweight champion Chris Weidman.

“I’m from Baldwin, Long Island and I never left New York,” said Weidman at the presser, which was also attended by UFC Chairman and CEO Lorenzo Fertitta, several local politicians and the headliners of February's UFC 169 event: Dominick Cruz, Renan Barao, Jose Aldo, and Ricardo Lamas. “I’m born and raised and as New York as it gets. I got my associates degree from Nassau Community College, my bachelor’s from Hofstra, and my master’s from Hofstra University. And recently, I accomplished the thing in my life that I feel is the most important besides getting married to my beautiful wife and having my beautiful children, and that was winning the UFC belt. That’s good, but there’s something really missing, and it kind of takes away from this belt, and that’s not being able to participate in my sport – something I’m so passionate about and that I’ve worked my whole life for – in my home state of New York.”

There have been rays of light over the years, with the bill to legalize the sport passing through the Senate on a now routine basis, but it has never reached the floor of the state assembly for a vote. Democratic Assemblyman Andy Hevesi said at Thursday’s press conference that the “magic number” of 76 votes is growing nearer and nearer, but until that happens, fans in New York will have to travel to nearby states like New Jersey and Pennsylvania, or even to Canadian cities like Montreal and Toronto if they want to get a dose of live UFC action locally.

And if you’re wondering why those states and cities around the world continue to put on and clamor for UFC events, a report entitled the “Economic Impact of Mixed Martial Arts in New York,” which was prepared by HR&A Advisors, Inc., puts matters in the most blunt terms possible: the sport generates money, not just for the promoters, but for the sanctioning states in the form of economic activity, tourism, jobs, and tax revenues. According to the report, $135 million would be generated annually by MMA in New York State. For the UFC’s part, they would commit to five events per year, two in NYC and three elsewhere in the state. It’s a big deal, one that supporters hope will finally reach a successful end in 2014.

“New York is the only state where professional MMA is illegal,” said New York State Senator Jose Peralta. “In fact, it’s the only place where MMA is banned, and that’s something that we need to stop. New York is not really living up to its potential, its sports tourism potential. We all know that we’re facing a struggling economy and 135 million dollars, that is essential, that is something that we can’t turn away. No one can ignore or deny the positive economic impact of professional MMA. It will create badly needed jobs here in New York, it will enhance tourism, attracting people from other states and Canada, and this will help New York City and help New York State. Professional MMA will boost revenue for surrounding businesses, including hotels and restaurants, and simply put, professional MMA will put money in the pockets of all New Yorkers. The New York State senate has passed it, now it’s up to the New York State Assembly, and we need to get it on the floor. And I know if we get it on the floor, we will pass MMA.”