The MMA Education of Stephen Thompson 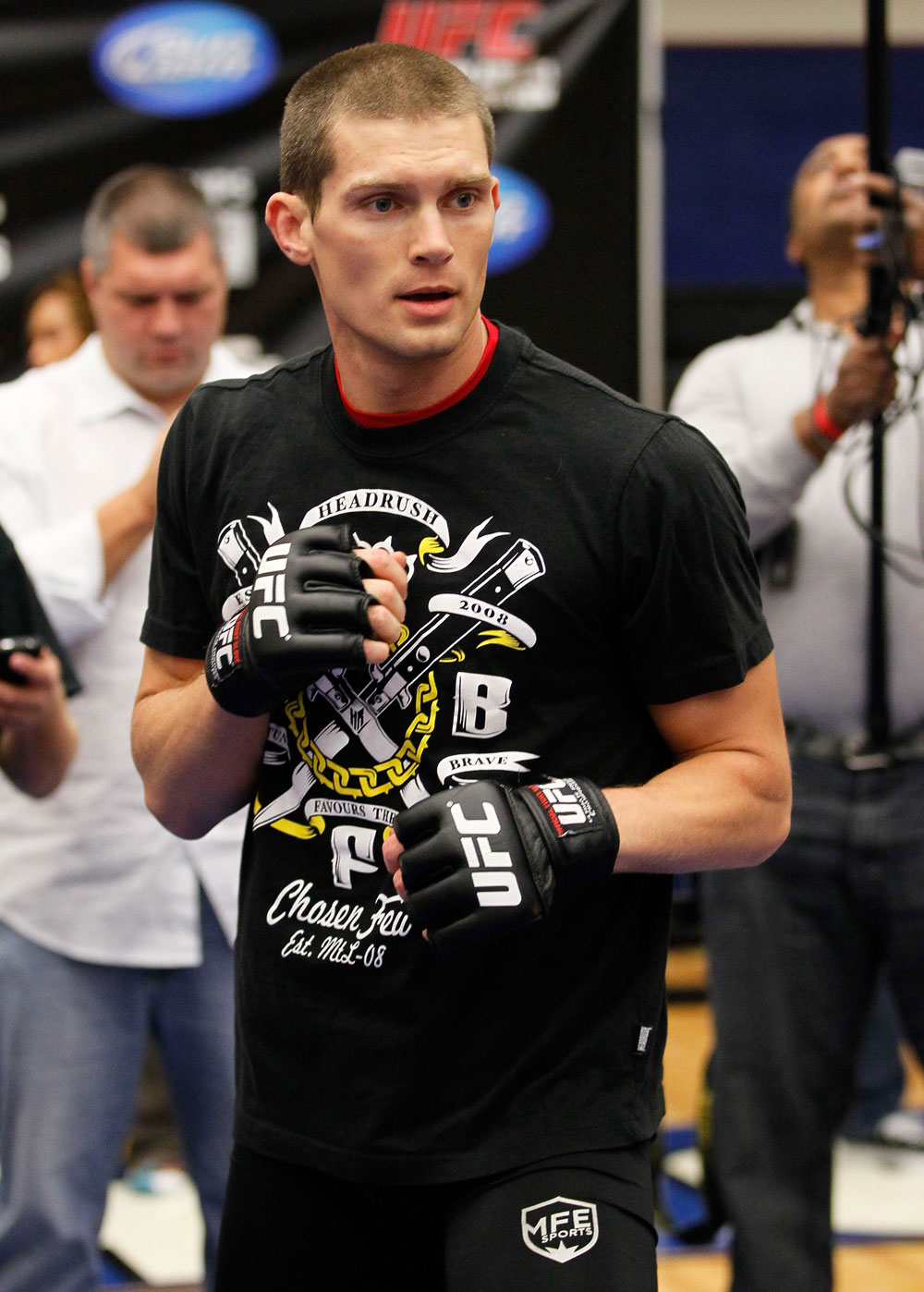 It was a striking fan’s dream match, but unfortunately the only ones who saw UFC middleweight champion Anderson Silva sparring with 57-0 kickboxing wizard Stephen Thompson were those in the Blackhouse gym in southern California.

“It was awesome, I had a blast there,” beamed Thompson, who revealed his sparring session with the pound-for-pound king when asked the difference between good strikers and elite-level ones. Thompson immediately points to Silva as a member of the elite.

“He is the best person I have ever sparred with in my entire life,” he said. “I spent a week in California at Blackhouse, and him and Lyoto Machida, those guys are A grade, top of the line strikers. And everybody else seems slow (compared to him) because he sees everything they throw. A good striker, somebody who’s grown up with it, is going to see everything their opponent is gonna throw. Of course, during the fight things happen and I’ve seen guys like that get knocked out, but it’s hard to explain. Whenever a new guy comes in who’s learning striking, they say ‘you know what I’m gonna do before I even do it.’ And with an eye like that, especially with a high-quality striker, anything you throw they’re gonna see because there’s always gonna be a telegraph there. They’ve trained themselves to see those telegraphs without even thinking about it; it’s just a reaction now. It’s like hitting somebody that’s not even there. I remember going up and sparring world-class kickboxers and I felt the same way, but you’ve just got to keep at it. It was the same way when I fought Anderson Silva. He’s just amazing. He’s not a fast guy; there are just no telegraphs. It’s just there, so it makes him seem super fast.”

To hear that from a decorated kickboxer like Thompson shows you just how good Silva is. It also shows you how dedicated to his craft “Wonderboy” remains. Despite taking countless titles in his sport and then winning his first six mixed martial arts bouts, the Simpsonville, South Carolina native is committed to getting better every time out. That means taking the lessons from his first MMA loss to Matt Brown in April of 2012 and bringing them into his Saturday return against Nah-Shon Burrell at UFC 160.

“I always had it in the back of my head that one of these days, I’m gonna lose,” said the brutally honest Thompson. “I’m a positive guy, I’m always thinking positively, and it sucks that I lost, but Matt Brown’s a very good opponent. He’s knocked out his other four opponents (on a five fight winning streak) and I’m the only that’s gone the distance with him, so I look at it as a positive thing. But now, there’s no hype; I can just go out there and fight. I don’t have a whole lot of that pressure anymore, so I think it’s a good thing that I did. And of course the experience of losing is always a good thing. It humbles you a little bit.”

You may think it’s an odd thing to hear from a pro fighter that has had so much success, but it’s not the first time I heard something like that. Back when he was an undefeated lightweight boxing champion, “Sugar” Shane Mosley told me that there was somebody out there who had his number. That somebody turned out to be Vernon Forrest. So in this sport or any other combat sport, if you’re in it long enough and fight enough top level opposition, you will run into someone who beats you. It’s part of the game. What’s also part of the game is how you recover from that first loss. Some fighters never do; others, like Thompson, use it as motivation and simply move forward.

“I guess it’s kind of the way their whole attitude is about it,” he said of dealing with a loss. “Some people are sore losers and you’ll never see them again after they lose. That’s just the way they were brought up. But growing up in the martial arts, especially in a school like this, it keeps you positive and it teaches the right things. If I lost, I was 57-0 in kickboxing and it was my first loss in MMA. I knew it was gonna happen one day. And I don’t take anything away from Matt Brown; he did exactly what he said he was gonna do. He kicked my butt.”

The veteran Brown was a clear winner in the bout, taking a well-deserved unanimous decision, but Thompson didn’t go away quietly. He was able to rock Brown on a couple occasions, and even when “The Immortal” turned up the heat on the mat, Thompson kept his composure and showed his fighting spirit, both of which will serve him well in the future once his ground game begins to catch up to his striking. Add in a rough weight cut, and the fact that he went three rounds with a surging contender is a moral victory in a sport where there are few of those.

“It was pretty cool because after the fight I got back home and I got a lot of emails and Tweets and messages on Facebook, and a lot of the fans out there respected me a whole lot more for sticking with it and not giving up,” he said. “I think that’s a cool thing. And I’m not a person to give up. Even in bad situations I want to do my best, and once I leave the cage knowing that I didn’t do my best, then I should be disappointed. After the fight, of course I was disappointed because I lost, but being out there with a veteran like Matt Brown and going the distance, it was a good thing and made me feel what I was truly made of.”

The only other bad part was that Thompson has had over a year to sit on the defeat due to a knee injury that forced him out of a UFC 154 bout last November against Besam Yousef. For the notorious gym rat, being unable to compete was a crushing blow, but it still didn’t keep him out of his family’s gym in South Carolina.

“We run a gym and run a kempo karate school and I’m the head kids’ instructor here at Upstate and I’m always staying busy,” he said. “I had a bunch of buddies who had fights coming up, I’ve been honored to be a part of their training camps, and I was still traveling and training. I was up in Denver for a week and a half for Nate Marquardt, and got to meet some really cool guys like Derek Brunson and Mike “The Lion” King, who you’ll probably end up seeing in the UFC pretty soon. He’s a monster and a 185er. So I was still staying active, just not competing.”

Saturday night, that all changes when he faces former Strikeforce standout Burrell, a talented up and comer who has made no bones about the fact that he wants a standup war with Thompson. “Wonderboy” welcomes such a bout, but if he has his way, he’ll show off more than his punches and kicks in Las Vegas.

“Nah-Shon is gonna be banging, but I feel that eventually he’s gonna try to take me down,” said Thompson. “This fight, my weight’s gonna be better, my cut’s gonna be better, we learned from the last fight and I’m gonna hopefully show the fans that I’ve got wrestling as well. When I’ve got my legs, I can do what everybody says I can do.”