Mizugaki is Established but Not Satisfied 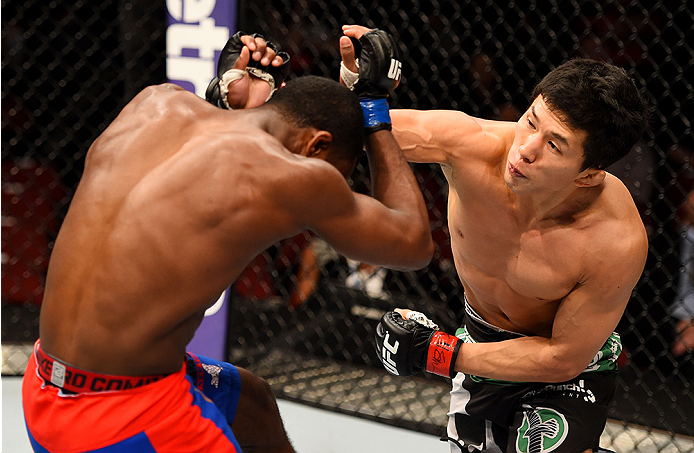 Six-and-a-half years ago, Takeya Mizugaki showed up seemingly out of nowhere at WEC 40 and pushed then-bantamweight champion Miguel Angel Torres to the limit.

Torres, who was originally scheduled to face Brian Bowles, was 36-1 at the time and coming off twin standout performances against Yoshiro Maeda and Manny Tapia in his first two title defenses. In the 16 fights prior, Torres had only been to the cards once and had finished 11 consecutive opponents heading into his impromptu meeting with Mizugaki.

In his promotional debut and first bout in North America, the Japanese newcomer, who sported an 11-2-2 record at the time, went five rounds with one of the best pound-for-pound fighters on the planet, combining with Torres to earn Fight of the Night honors and instantly establish himself as a fixture in the 135-pound ranks.

Outside of transitioning to the UFC with the rest of his WEC counterparts when the company with the little blue cage shuttered the doors and windows following WEC 53, not much has changed since that April night at the UIC Pavilion in Chicago. Now 31 years old, Mizugaki has solidified his place as a tough out in the bantamweight division, filling an important role within one of the emerging weight classes in the UFC.

When most people hear the term “gatekeeper,” they take it as a negative – a knock on a fighter that has failed to advance beyond a certain point in their respective division, but there is another side to the designation that doesn’t often get considered.

In order to be viewed as a gatekeeper, a fighter has to spend several years stationed inside the Top 10 and have a history of turning back hopefuls. While failing to reach championship heights is frustrating for any fighter, a lengthy career as a perennial presence among the best in his or her division should be viewed as an accomplishment, not an indication of failure.

Being champion is everyone’s dream, but half-a-dozen years as one of the 10 best fighters in your weight class isn’t a bad way to make a living either.

Mizugaki has filled that role in the bantamweight division since moving into the Octagon, serving as a litmus test for fighters looking to climb the bantamweight ladder, dispatching those unqualified to make the ascent. It’s not the role he would like, but serving as the dangerous veteran standing between the stars of the division and everybody else is where the Japanese veteran resides; at least for now.

“It’s important for a fighter to stay in the Top 10,” Mizugaki began when asked about his current positioning as the high-end gatekeeper in the bantamweight ranks, “but I want to go for the top, even though I do believe I need to have this kind of motivation to stay in the Top 10 as well.”

Let’s call this Bisping’s Rule, named, of course, after perennial middleweight contender Michael “The Count” Bisping, who has spent the vast majority of his career entrenched in the Top 10, turning away numerous fighters trying to break into the upper echelon in the 185-pound weight class while failing to clear the final hurdle in the way of a title shot on a couple different occasions.

Ask him about his standing in the division and the 36-year-old Manchester native turned Orange County resident will tell you a variation of the following every time: “I believe I have what it takes to be champion, and with each setback, I’ll dust myself off and start up that mountain again until I finally reach the top.”

Mizugaki has that in common with Bisping. While both are ultimately proud of what they’ve accomplished in the cage, neither has any interest in setting aside their ambitions of reaching the top and claiming championship gold, opting instead to keep pressing forward, even if it means encountering resistance and tasting defeat from time-to-time.

“I am currently ranked, but I really have a strong desire to (climb even higher in the rankings) though,” offered Mizugaki, who sits at No. 8 in the latest bantamweight rankings. “If I can beat those up and coming young prospects, then that would lead me to something better and bigger.”

At the moment, however, the 31-fight veteran isn’t worrying about turning back the latest emerging talent in the division. Instead, he’s carrying a two-fight losing streak into the Octagon this weekend against George Roop, a fellow WEC alum who has been on the shelf since suffering a first-round knockout loss against Rob Font at UFC 175 in July 2014.

To Mizugaki’s credit, his current skid is comprised of losses to former champion Dominick Cruz and Aljamain Sterling, an undefeated rising star from the Serra-Longo Fight Team who rests two spots ahead of Mizugaki in the rankings and has been angling for a big name opportunity non-stop since their meeting in April.

Regardless of who those setbacks have come against, the Kanagawa native knows that his back is against the wall heading into Saturday’s event at the Saitama Super Arena, and he’s hoping a return to compete on home soil for just the third time since his bout with Torres can be the beginning of a return to form and some forward progress in the division.

“I am currently on a two-fight losing streak so I know I am in a difficult situation,” offered Mizugaki, who has gone 7-3 in 10 UFC appearances to date. “But (this weekend), I can fight in own country, and I think winning in Japan can be the beginning of my comeback road.”