"I’ve definitely been practicing a lot and I don’t think he knows what my game plan is one bit. It’s probably going to completely surprise him.”
By Gavin Porter • Mar. 21, 2019

Bryce Mitchell was a stand-out on The Ultimate Fighter 27: Undefeated, both for his fighting ability and his unique personality. But that isn’t what the featherweight out of Arkansas is best known for.

Just over six months ago Mitchell fell off a 20-foot ladder and in the fall a drill tore his scrotum. Mitchell has recounted that story more times than you could imagine, and while it might be interesting, he would rather talk about his upcoming fight at UFC Nashville.

“Thank goodness,” Mitchell said when he was told this interview wouldn’t contain a single drill story question. “I feel like that’s all I talk about. I’m just focused on Saturday, not on what happened.”

Part of Mitchell’s excitement comes from the fact that he’s fighting just over five hours away from his hometown of Cabot. That means you can expect a large fan section for “Thug Nasty” on Saturday.

“Yeah I begged for this fight in Nashville because it’s pretty close to home,” Mitchell said. “I’m from Cabot, Arkansas and a bunch of my family and my friends all that are coming out to support me. I’ve gotten a lot of love back home so I’m trying to put on a show for these guys.”

Mitchell will be fighting Bobby Moffett, a fighter who made it to the UFC after securing victories on Dana White: Lookin’ For A Fight and Dana White’s Tuesday Night Contender Series. He then followed up those stellar performances with a controversial submission victory over Chas Skelly.

With those bouts in mind and the right work put in during fight camp, Mitchell believes that he has the skill-set necessary to defeat “The Wolfman”.

“I decided I needed to put on a little bit of weight so I’ve been hitting the weights hard,” Mitchell said. “I’ve definitely been practicing a lot and I don’t think he knows what my game plan is one bit. It’s probably going to completely surprise him.”

It will be a battle of game plans, as Mitchell is looking to surprise him with diverse striking, strong grappling and a stubborn ground game. While Moffett recently said that he believes he will submit Mitchell in the second round.

But when it comes down to it, Mitchell plans to adjust and do whatever it takes to win the fight.

“I mean I just like to win,” Mitchell said. “I’ll take whatever. I’m going to come out looking to throw crisp, straight punches and all that. And if it don’t go my way I’ll bite down on my mouth piece and just start swinging man because I’m just trying to get a win. So any way that I can get a win, I’ll do that.” 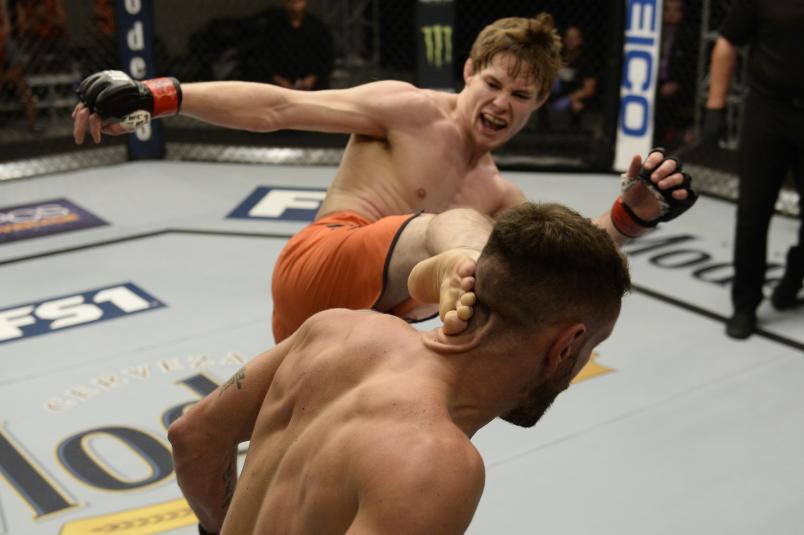 Back in November of 2018 Mitchell faced fellow TUF 27 teammate Tyler Diamond at TUF 27 Finale, a Team Alpha Male product that many people had their eye on heading into the show. Mitchell was able to secure a majority decision in what was a tough back and forth showdown.

Mitchell impressed with his well-rounded skills and his gritty style. That’s something that he plans on putting on display yet again in Nashville.

And no, one of those weapons won’t be a drill.

Mitchell and Moffett headline the UFC Fight Night: Thompson vs Pettis prelims on ESPN+ which starts at 5pm/2pm ETPT on ESPN+.