Mitch Gagnon: Back in Business

"Dustin and I will definitely put on a show for the fans and viewers. That’s what it’s about and I think it is going to be a
great fight." - Mitch Gagnon 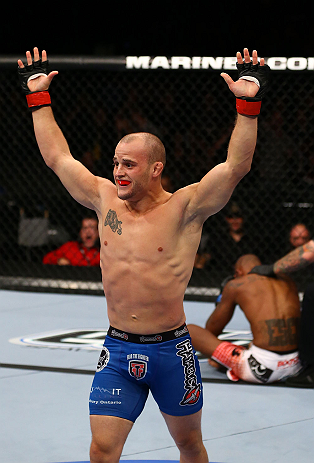 At the highest level of mixed martial arts, where winning means everything, some fighters have a tendency to play it safe. The talent to succeed is undoubtedly present, but knowing victory inside the Octagon will propel or extend their careers, has a unique impact on how the action plays out.

While this style of fighting is a quick way to draw scorn from the UFC brass, staying in the win column is job security, and any type of stable ground in the ever-shifting world of MMA can be an attractive lure. That being said, the “safe route” isn’t a philosophy Canadian Mitch Gagnon subscribes to.

The 28-year-old bantamweight is a finisher through and through, as all nine of his career victories have come as the result of Gagnon putting away his opponent. The Team Shredder product blazed through the eastern Canadian regional circuit as he collected wins in eight out of nine showings with every successful outing ending in a submission finish.

The momentum he generated competing for promotions in Montreal put him on the UFC’s radar, and he was chosen to make his promotional debut at UFC on FOX 2 in January of 2012. Unfortunately a visa issue would lead to the bout being scrapped, but Gagnon wouldn’t have to wait long, as his next fight was slotted for five months later at UFC 149.

The savvy grappler would face TUF alum Bryan Caraway in his promotional debut in Calgary, and despite coming out on the opposite end of his signature guillotine choke, the two bantamweights engaged in the caliber of scrap to earn both men Fight of the Night honors.

Where a fight night bonus and recognition for a hard fought night inside the Octagon is enough for some, it is far from the level of expectation Gagnon sets for himself. The young Canadian was eager to get his first win under the UFC banner and he accomplished that task two months later when he defeated Walel Watson at UFC 152 in Toronto.

“It felt great to get my first win,” Gagnon said. “It was a little bit surreal and I want that feeling again. I feel like this fight is a new beginning just because it’s been so long. I really wanted to be active after the Watson fight, but with the circumstances of my surgery I couldn’t. That win is a big stress off my shoulders and I’m pretty stoked about this upcoming fight.”

Now, with a victory under his belt, Gagnon will turn his focus to establishing himself as a threat in the bantamweight division. The first step of that journey will come when he squares off with undefeated prospect Dustin Kimura at UFC 165.

Despite a year-long layoff, the time away from the cage isn’t something he believes will be a factor. Gagnon has been through this before and plans to emerge victorious in Toronto.

“I wish I could have more of that momentum,” Gagnon said. “It’s going to be a year between fights and I feel like I’m starting from scratch in the UFC. That’s how I’m seeing it and it’s like my first fight again. I’ve put a lot of time into preparing for this fight and I’m taking it very seriously. It will be almost a year to the day when I step back into the Octagon and it feels like a new start.

“It’s like a déjà vu,” he continues. “I’ve been through this process before and if anything, the break gave me more motivation and rest time because I was going pretty hard. While I’ve only fought two times in the UFC, I had four camps for those fights. I completed my first camp and my fight got cancelled due to the visa issue, then I had a fight scheduled in March that I had to pull out of due to injury. That being said, I still had full training camps for both of those fights so I feel like I’ve been steadily improving my skills.”

It will be a battle of expectations, as both fighters have garnered a buzz for their fighting skills. Nevertheless, Gagnon believes he will have the edge against the young Hawaiian, and he is looking forward to handing Kimura the first loss of his career. But the Ontario-based fighter is also expecting an all-out scrap in front of the Canadian fighting faithful and guarantees the fans in attendance will have something to remember when it is all said and done.

“Dustin and I will definitely put on a show for the fans and viewers,” Gagnon said. “That’s what it’s about and I think it is going to be a great fight. The kid is a stud and I’m sure you aren’t going to be hearing any boos during our fight.

“I’m not bringing anything different except my skills are sharper. I’m always in exciting fights. In my 11 pro fights, I’m yet to be in a dull fight. Either I finish my opponent quickly or my opponent was able to take that pressure and give a good fight for the fans. I’m hoping for the same thing.”