Mitch Clarke: Believing in the Process 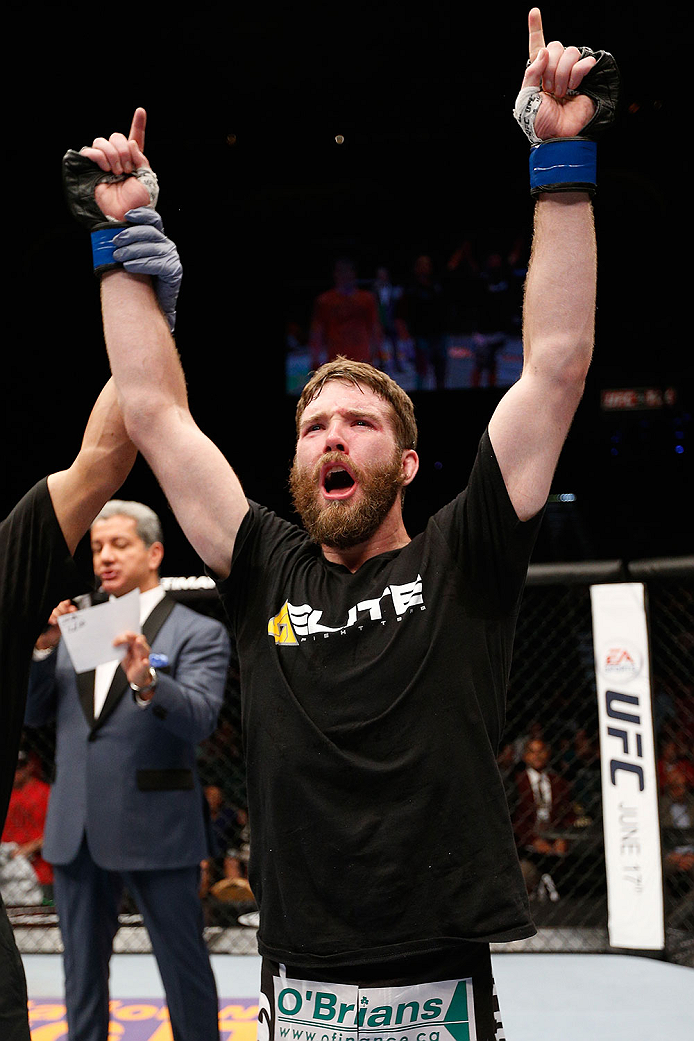 Pardon the play on his nickname, but this was most definitely the “Danger Zone” for Mitch Clarke. After a rough first round against rising star Al Iaquinta at UFC 173 in May of last year, the Canadian had to decide whether to fight or flee, to accept his third UFC loss in four tries or to even up his Octagon record at 2-2.

“Hey, we got him right where we want him,” Clarke’s coach, John Crouch, told him between rounds. That’s all it took.

“I laughed, he laughed and I came out for the second fresh and ready to go, and that was a big thing,” Clarke recalled. “It was a new round and the last round didn’t even happen.”

Of course, to the naked eye, round two was beginning to look like round one, as Iaquinta took the lead and began to let go with some hard ground strikes. Clarke was apparently in trouble until he wasn’t, and 57 seconds into the second stanza, his hand was raised, having submitted Iaquinta with a D’arce choke.

“I laid the trap,” he said. “Right before he passes into my side control, I start elbowing his face and he puts his arm over the top of my head just enough, and then that’s when the trap was kind of set. Then he stepped over into side control, I rolled under and hit my D’arce, and that was one of the moves I worked on during my camp. I caught it on a couple good guys and it worked out quite well.”

That’s an understatement. Clarke earned an extra $50,000 that night for his Performance of the Night win, a statement victory that made the Saskatoon native a fighter to watch in the lightweight division. It also reminded him just why he loves the sport.

“Anything can happen and it’s like chess – you’ve got to be a couple moves ahead,” he said. “A lot of the time, everyone thinks it’s checkers, straightforward, but you have to play chess out there.”

The 29-year-old is one of the best at maneuvering on that chess board, and when you add Crouch and the MMA Lab squad in Arizona to the equation

“Anything can happen and it’s like chess – you’ve got to be a couple moves ahead.”

, wins like the one he had over Iaquinta should eventually be the rule and not the exception.

“There are so many guys that can put you through the pressure cooker here at The Lab,” Clarke said. “John Crouch has really been big on making sure I can break through and keep cool under pressure and then work my magic.”

Returning to the Octagon this Saturday for the first time since that bout to face former Ultimate Fighter winner Michael Chiesa, the magic Clarke really needs at this point is a spell that will keep him healthy. Since debuting in the UFC in 2011, Clarke has fought just once in each ensuing year. This is his first bout of 2015, and he hopes it will be the first of many.

“We’ll see,” he laughs. “Who knows what will happen. I didn’t expect to blow out my knee in one fight, I didn’t expect to pop my elbow, but I used that time positively, not just to get healthier, but also to improve as a fighter and improve as a person. So it’s making a difference. I think every time I’m coming out as a better fighter, so it’s just about how I use my time.”

This year he hopes to use it to fight, and while the idea of being a Donald Cerrone or his teammate Benson Henderson and competing four times a year is attractive on one hand, on the other, Clarke believes that being able to do that at the UFC level requires the elite-level skills that he’s still trying to master.

“I look at those guys, and they’re so skilled, and a big part of it is that they’re at a higher skill level than myself, so I’m using this time between fights to get better,” he said. “Maybe when I have a black belt and I’m a better striker and maybe when I’m a really good wrestler, when everything comes together perfectly, then I’ll take those fights on two weeks’ notice every time I can get them. But that’s upper echelon versus the other guys in the UFC, and they can afford to do it.”

Clarke is on the right track though, and with the confidence that comes after a big win and with knowing that he has a top-notch team behind him, that upper echelon may be a reality sooner rather than later.

“I believe in myself, and my coaches believe in me that I can do good things and win these big fights,” he said. “I think the skills are there; we just need to keep me healthy and just believe that good things are happening. Crouch always says ‘keep winning and good things happen.’ It’s all about believing in the process.”