"As a kid I was always fighting in school or in the street, stuff like that, and jiu-jitsu was the first sport I fell in love with and was competing in, but I was always doing boxing and people really didn’t know about it."
By Damon Martin • Jun. 4, 2019

From the day he arrived in the UFC, Pedro Munhoz had a reputation as a slick submission specialist with a dominating ground game, but no one gave much notice to his striking arsenal.

On some level, the 32-year old Brazilian understands why that became his calling card, considering he was a black belt in Brazilian jiu-jitsu with multiple grappling titles on his resume, not to mention a string of submission wins that helped him earn a spot on the UFC roster.

While he will always love the human chess match of grappling with an opponent on the ground, Munhoz says the perception that he’s constantly looking to take his fights down to the canvas to go for a submission is just not accurate.

“I started training jiu-jitsu, but literally a few years later I started doing boxing way back in those days in Brazil and then Muay Thai,” Munhoz explained ahead of his return to action at UFC 238. “I had an opportunity to train with the best in grappling and then Muay Thai and boxing. For example, I got my black belt in Brazil with “Cobrinha” [Rubens Charles], who is a 10-time world champion, [Brazilian jiu-jitsu] hall of fame. If I tell you names, I’ll be giving you a list of the greatest grapplers and world champions. I was a two-time Brazilian National Jiu-Jitsu no-gi champion. My first boxing coach was the biggest boxer that we had in Brazil.

“Then I moved to California and I was training with Rafael Cordeiro, which I did for seven years. I moved here to American Top Team and [I’m working with] Anderson Franca, Katel Kubis, great kickboxers and world champions.”

According to Munhoz, his accomplishments in jiu-jitsu overshadowed his passion for striking when he first transitioned into mixed martial arts, but he feels like he has always been a very well rounded fighter.

In fact, even when he was competing in grappling tournaments in his native Brazil, Munhoz always had his eye on the bigger prize, which was making the eventual move into fighting.

“That was always my goal,” Munhoz said. “Everyone thought I came from jiu-jitsu, but as a kid I was always fighting in school or in the street, stuff like that, and jiu-jitsu was the first sport I fell in love with and was competing in, but I was always doing boxing and people really didn’t know about it. I was not a big talker so people thought I was a jiu-jitsu guy.”

Since arriving in the UFC, Munhoz has pulled off several submissions, but his past two fights have ended in highlight reel knockouts, including his most recent victory against former bantamweight champion Cody Garbrandt.

As much as it might seem like Munhoz has somehow added a lot more to his arsenal lately, he promises this was the skill set he’s been developing for the past 10 years but now he’s getting the opportunity to show it more often. 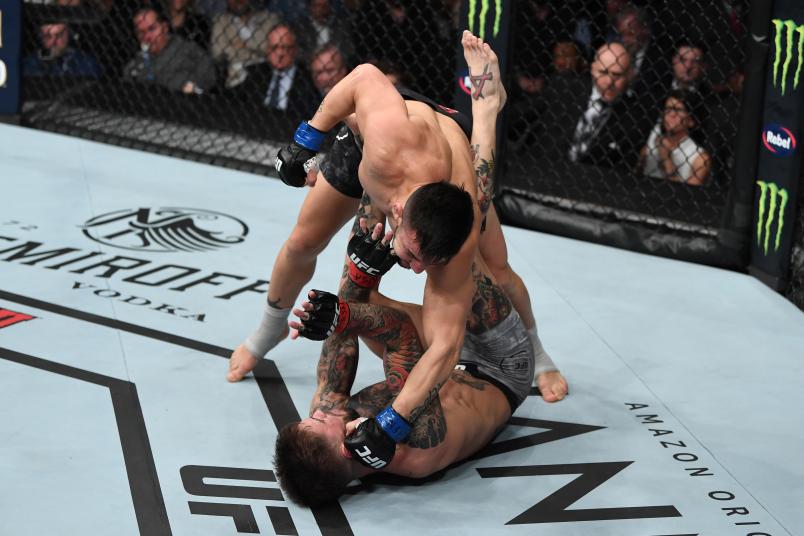 “They see in my fights, now I knock people out,” Muhnoz said. “When I fought Brett Johns it was like a year ago and we were both exchanging and I was hurting him a few times in the fight and then right after that was Bryan Caraway and I KO’d him and then it was Cody [Garbrandt]. So people right now are wondering where did those standup skills come from?

“I started explaining to people that jiu-jitsu and boxing were always my first sports. Jiu-jitsu, I was competing more but in boxing I was just training. I wanted to stay with jiu-jitsu but I knew I was going to MMA. I was raised in no money and back then in jiu-jitsu there was no money there. You were just competing. I knew if I wanted to compete and make some money I had to do MMA. It was never a big deal because I always liked to fight.”

The other major factor in Muhnoz’s willingness to stand and trade with his opponents lately is the result of coming out on the wrong end of a couple of split decisions.

The two most recent defeats on his resume came in a pair of fights that could have gone either way but that forced him to re-evaluate how he was going to approach his strategy going forward.

“It’s definitely my mindset to go in there and try to finish my opponents. No matter if it’s stand up or on the floor,” Munhoz said. “It’s definitely got a lot to do with my confidence and my skills and my mindset that if the fight goes to the ground, I can choke anyone in the division. If the fight stays standing, I’ll be able to knock anybody out.

“I had a couple fights that I lost by split decision and the frustrating feeling that I won the fight, I don’t want to give that to the judges anymore. It’s everything or nothing. That’s the way I perform. I’m going to get knocked out or I’m going to knock you out.”

That “kill or be killed” mentality is the exact approach that Munhoz is carrying into his fight this weekend against Aljamain Sterling in Chicago.

“I always respect all of my opponents, especially in the UFC, because everyone is dangerous. Every single fighter from No. 1 to No. 20 is dangerous,” Munhoz said. “But I am just focused on what I’m capable of doing and what I can do to get that huge knockout or submission over him.”

A win this weekend could put Munhoz in line for a title shot and that definitely hasn’t escaped him as he prepares for Sterling.

That said, Munhoz knows he can’t lose sight of what’s in front of him or what comes next doesn’t even matter.

“I’m really thinking a lot about fighting for the title but I’m not happy thinking about it at this moment because I think about every single step and my next step is fighting Aljamain,” Munhoz said.

“I work a lot on my mind and my vision so I have a huge fight coming up right now. But I want to do a great performance and do in my fight what I’m doing in the training. I pass that and then I’m definitely looking forward to a title fight. Then it’s going to be great.”