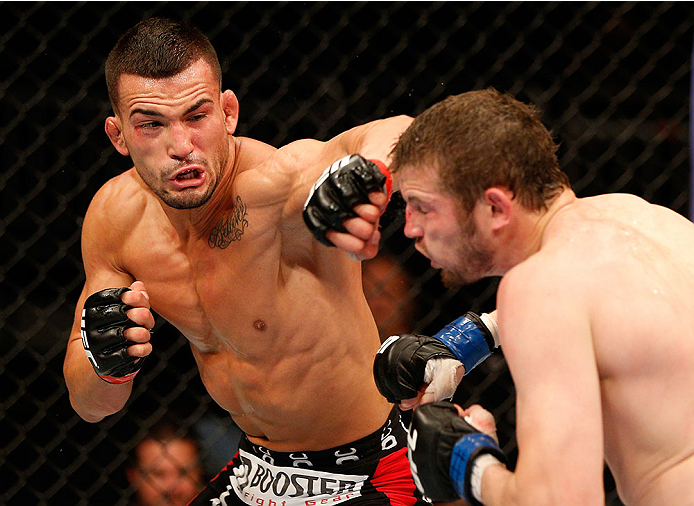 Last April, the emerging featherweight stepped into the cage for his UFC debut opposite another hyped prospect, Chas Skelly, as the second fight on the night. He would be followed to the cage by five of his teammates and the driven young newcomer was determined to start the night off right for the members of the elite Cococut Creek, Florida institution.

“My UFC debut, I fought on the same card as Thiago Alves, Jorge Masvidal and Yoel Romero,” the unbeaten 23-year-old begins. “We had five guys fighting and I was the second fight of the night, the first guy from ATT competing, so I felt like I really had to put on a show – make sure I got a win and got the vibes going in the right direction, get the team believing in themselves.”

He got the night headed in the right direction by picking up a majority decision win over Skelly in a fight that was nearly stopped midway through the second round due to an inadvertent, but illegal, knee that caught Bektic flush while he still had a knee on the canvas. After surviving the round and shaking out the cobwebs, he rallied to control the final frame and pick up his first UFC win and one by one, his teammates followed suit.

Caio Magalhaes knocked out Trevor Smith. Masvidal bested veteran Pat Healy. Alves returned after more than two years on the shelf to earn a unanimous decision win over Seth Baczynski and Romero pitched a shutout on the scorecards opposite Brad Tavares to give ATT a perfect 5-0 night in Orlando.

This weekend, Bektic once again shares the fight card with a pair of teammates, as Alves and Nik Lentz compete in the main and co-main event of Saturday’s UFC Fight Night event in Goiania, Brazil. After originally being paired with Renato “Moicaino” Carneiro, Bektic will instead face off with Lucas Martins, a dangerous finisher with a 15-2 record.

“Now it’s my third UFC fight and I’m again fighting with Thiago, and also Nik Lentz. I’ll be fighting before they do, so I really want to make a great impression and start the show off in the right direction, get the ball rolling for my teammates. I love that. I’m going to carry that flag very well.”

Listening to the 145-pound up-and-comer speak about his teammates and the group at American Top Team, it is clear how much pride he takes in representing the squad, and with good reason.

As a young child, Bektic and his family fled Bosnia and Herzegovina as the country was being torn apart by the Bosnian War. After five years in Germany, they relocated to Lincoln, Nebraska, but he never felt settled or accepted in either place.

Sports eventually gave him a foundation and his four years at American Top Team have transformed the boy that first walked through the doors into a man that is ready to make some noise in the UFC featherweight division.

“As a kid, I was going around crazy – getting into fights, doing all those things to get in trouble,” Bektic admits, echoing what is an all too familiar tale for kids that grow up in single-parent homes. “My mom was a single parent, working a job, so it was me and my two older brothers and we didn’t have (any) adult supervision, so we didn’t have a lot of discipline.

“Sports always brought me discipline and once I found MMA, I’ve been 100 percent in it ever since. I’ve been at American Top Team for four years. I came here as a boy – I was disciplined, but I didn’t know much about respect and a lot of things. Being here, I’ve grown up as a person and I’m so grateful for it.

“Before I ever came to American Top Team, my favorite fighters were Thiago, Georges St-Pierre and Mike Brown,” he adds. “Now I’m really, really good friends with Thiago and great friends with Mike Brown. It’s crazy.”

So too is his potential.

Nine months after his narrow debut win over Skelly, Bektic squared off with Paul Redmond in his sophomore appearance under the UFC banner, the Irishman serving as a late replacement for Alan Omer. With less than two weeks to prepare for the contest, Redmond missed weight, and when the cage door closed, Bektic went to work, turning in one of the most dominant performances of the year.

“My last fight was like a sparring session; I didn’t go through anything,” he says of the January beatdown of Redmond that pushed his record to 9-0. “No disrespect to Paul Redmond or his team, but I took seven punches to 160. That’s a big statement, but I’m looking to do something amazing this time around.”

The late switch from Carneiro to Martins doesn’t bother Bektic in the slightest, as he’s constantly in the gym, training with one fighter in mind.

“When I don’t have an opponent, my main focus is Jose Aldo,” he admits. “I’ve said since I started MMA that my goal is to be champion and there has only been one guy that has been the champion at 145 and that’s Jose Aldo.

“When I’m not preparing for an opponent, he’s my main focus. I know what it takes to beat Aldo – he’s a great striker, great takedown defense, black belt in jiu-jitsu, comes from an amazing team – and I know what I have to do to be a champion, so I’m constantly training to be the best martial artist in all the different aspects of MMA.

“I know I can’t just say these things and not act on them - I know I have to prove myself and I will prove myself; I will gain that respect.

“But it’s a pretty easy change,” he adds of the shift in opponents. “They’re both Brazilian, they’re both good strikers. I’ve seen Lucas fight before and I knew he was a tough guy then, so I know what to expect and I just look forward to showcasing my skills and the major improvements I’ve made since the last fight.”

And that all comes from being a part of the American Top Team family.