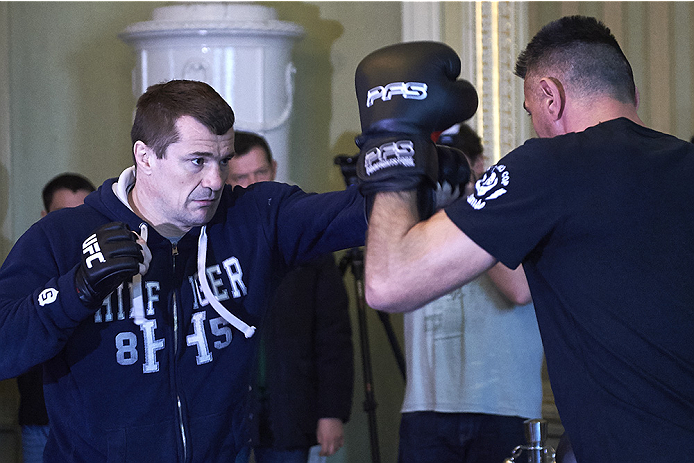 Mirko Cro Cop has thought about his life after fighting. He doesn’t like it.

“What am I going to do?” he asks before reeling off a stream of consciousness recitation of what a typical day might look like.

“I can wake up at 10 o’clock in the morning, take my dogs out, go to my coffee bar for a cup of coffee or tea or juice, have a lunch, take a nap in the afternoon, wake up at five or six o’clock, go around with the kids, go to the coffee bar and play some cards, go back home, sleep again watching TV, enjoying life, and that won’t work.”

He chuckles, almost knowing that such a leisurely existence would be Heaven to some. Cro Cop is a fighter though, and despite having already put together a resume anyone would envy, leaving him, at 40, with nothing to prove, what works for other people won’t necessarily work for him.

“I know how I am,” he said. “I’m wild. After month two or three, thousands of things would cross my head. I’m too young to go to retirement. Mentally, I’m too young. It’s not about money, not at all. I earned enough for a decent life. I was a smart guy. Not too smart, but smart enough. (Laughs) I never threw money through the window like many people did. I was thinking all the time how to save the money. I have a stable life. I’m a normal, stable person, but I like competition and I like adventure.”

On Saturday, the adventure continues for Cro Cop as he begins his third UFC stint in Krakow, Poland. Fighting in Europe for the first time since 2009, the Croatian faces Gabriel Gonzaga in a rematch of the 2007 bout that in some ways put a cloud over his whole UFC experience.

In 2007, Cro Cop had just come over from a career in PRIDE that marked him as one of the best heavyweights to ever fight in that promotion. Now it was time to conquer the UFC, but after an initial win against Eddie Sanchez, he was knocked out by the unheralded Gonzaga, and would only go 3-5 over his next eight bouts in the Octagon. The last bout, a 2011 stoppage at the hands of Roy Nelson, was a particularly painful defeat, both literally and figuratively, because he assumed that it would be his last.

“My last fight in UFC, I mentioned it so many times I don’t want it to sound like some excuse, but I fought with a really hard injury – a broken bicep and broken ligaments, he said. “It happened in the last round of the last sparring during my preparation and I was training with Pat Barry. I caught Barry good with a hook to the head, and I remember he dropped on his ass (Laughs), but my bicep and ligaments, I felt terrible pain. I went the same night to the doctor and he said you need urgent surgery, but I decided to fight. It was my decision. I could have gone for the surgery and waited six, seven, eight or nine months to recover and to have another fight. But it was too long a period and I was so unhappy, and I decided to fight.”

He lost, and doctors told him that they couldn’t guarantee that the surgery would take so long after the initial injury, throwing Cro Cop into a deeper funk.

“After that fight I was so depressed and I didn’t know how the surgery was going to be, if it was going to be successful or not, and I really didn’t think that I would fight again at all,” he said. “But I finally recovered and found a new strength, and here I am back again, and this time it really makes me happy.”

Cro Cop sounds good, confident, happy to be fighting again. But to get to this point, he had to prove to the world that he still had what it takes to compete, and he didn’t shy away from any competition once cleared to get back to work. Mixing in some MMA with a lot of kickboxing, Cro Cop went 7-1 in kickboxing and 3-1 in MMA after the Nelson fight, once again thrilling the diehard fans who stood by his side for all these years. But it was his most recent MMA win over Olympic Gold medalist Satoshi Ishii in their New Year’s Eve rematch that convinced Cro Cop – and his fans - that maybe another run in the UFC wasn’t so far-fetched.

“I have great support and I was really happy because of that, but at the end of the day, I had a really good performance for the New Year, right before my signing with UFC, and I think it also contributes to the atmosphere around my returning,” he said. “Ishii is an Olympic Gold medal winner, and he is a tough fighter. He’s young, tough, and I destroyed him. I kicked his ass badly and I showed that I’m in shape and that I can still fight and be a threat.”

Soon after, it was announced that Cro Cop was going to fight in the Octagon once more.

“UFC is UFC,” he said. “PRIDE was the number one organization during the golden days, 2001-2006 and then everything started with my leaving and UFC bought them, and now UFC is everything in the MMA world today. It’s the leading organization, the only world global organization, and everyone wants to fight in the UFC and the UFC has the top fighters. The UFC belt is the only one that really counts in the world of martial arts today. I don’t want to offend anyone, but that’s the truth and everybody knows it.”

Cro Cop isn’t talking about belts these days though. He knows he must avenge his loss to Gonzaga before anything else happens, but he does tease with some of his hoped for future plans should he defeat “Napao.”

“I really want those rematches,” he admits. “I wouldn’t be so motivated to fight some young fighters that mean nothing to me. The Gonzaga situation is different. Gonzaga and some other people that are under UFC contract, like Nelson, like (Mark) Hunt, like (Minotauro) Nogueira, so we will see what happens. But let’s go step-by-step. The first one is Gabriel Gonzaga, and I will do my best to beat him, and that’s as far as I think so far.”

It’s a wise course of action, but then again, Cro Cop was never one for calling out people. He was always the cool assassin, the stoic figure who would unleash a laser-like left hand down the middle or whip off one of his patented head kicks, with the option for those on the receiving end to be a trip to the hospital (right leg) or cemetery (left leg). Is that guy still around?

“I’m 40 and I feel good,” he said. “I train very hard, I’m very disciplined, I’m professional, and I feel really good. But I’m real with everything, and if I don’t believe I can beat people that are put in front of me, I wouldn’t go on this adventure. Believe me I wouldn’t. That’s how I feel. I think that every man needs to stand hard with both feet on the ground and be realistic, and I think I am. Of course there is no guarantee that you will beat anyone in the UFC. They’re all tough fighters, but I have a good chance to beat anyone, and for me that’s enough.”

Enough to keep him going in the sport? Absolutely. And that’s the only news he wants to hear, because he doesn’t want to think about the alternative.

“I live martial arts,” he explains. “That’s my life. Martial arts, kickboxing and MMA, especially MMA, gave me everything. To me, to my family, I secured my life. But it’s not all financial; I really love it and I really enjoy my training. And I don’t want it to sound pathetic, but I just feel that part of me will definitely die when I decide on my retirement. Part of me will die, and unconsciously, you don’t want to die. Training is hard, but I’m used to it. People think my life is pain and agony. That’s not true. I train two times a day, I live by a schedule, and it makes me happy. I still feel good, I still feel powerful, and it’s very hard to get to that point, but when your hand is raised in the Octagon or ring, who can pay for that feeling?”