Miranda Maverick Believes An Emphatic Finish Over Maycee Barber Will Announce Her Arrival As A True Contender.
By MCKENZIE PAVACICH, ON TWITTER @MPAVACICH_ • Jul. 23, 2021

Miranda Maverick believes she was literally born for this.

“That’s how I see it. I don’t know anyone else in my generation that has worked this hard to get where I am or worked on a farm doing literal physical labor,” Maverick said during her fight week interview with UFC.com ahead of her bout against Maycee Barber at UFC Fight Night: Sandhagen vs Dillashaw.

“There’s a difference between getting muscles from the gym and muscles from the age of three lifting stuff that was heavier than you, or holding on to a cow to take it down. Literally, I’ve done these things, and it’s just such a different background that nobody can compete with.”

Maverick’s strength has almost single-handedly defined the reputation that precedes her, but it hasn’t all been positive, as the 24-year-old has had to navigate the opinions of strangers for most of her career.

“People are like, ‘Steroids! She must be a gym junkie,’ and I’m just like okay, well if you saw my entire family, or me with a six pack when I was four years old, maybe you’d think a little differently,” Maverick explained. “Everybody has their own views, and I think we all fall guilty of judging people by their cover or what we think we know of people, but I’m a whole book.”

Despite having such a beneficial natural advantage, Maverick tries not to lean too much on her strength, training for each opponent as if they’re “the toughest person on the planet.” And as the 13th-ranked flyweight continues to work her way up the UFC ranks, that statement gets more and more true.

"I've finished two girls in the past that had never been finished before, so that is my thing, that is my signature."

Miranda Maverick (@FearTheMaverick) knows how she wants to secure a victory against Maycee Barber at #UFCVegas32 🔉⬆️ pic.twitter.com/gtbXiInlOK

“I can’t be underestimating (any opponent). I want to train always like I’m about to fight the world champion; it’s not just about who’s standing in front of me at that moment,” the United States heartland native said. “I think Maycee’s always bringing her best into the cage. I respect her as an opponent, and as a person. She is the future of the sport, whether she loses this one or not.”

Looking to match Barber’s best inside the Octagon on Saturday, Maverick said she feels more comfortable and confident after this past camp than she has in a while.

“I think every fight camp, I improve, but I think this time has been a huge jump for me,” Maverick said. “I had plenty of time this fight camp to get ready, to improve between the fights, to get my nutrition under control. I’m walking around right now at the lightest weight I’ve ever been for fight week, which is awesome; that means my weight cut is going to go easy.”

After her last fight, originally scheduled in February but moved to March due to complications in the opposite corner, Maverick truly learned the importance of proper weight management.

“I had a very hard time the second time around,” Maverick said of making weight for her rescheduled bout against Gillian Robertson. “I got a call from her management that week, wanting to fight the next weekend, and I was like, ‘Absolutely not.’ I’m a lot bigger than her, I have to actually cut a lot of weight, so we met back I think three weeks later. It was very hard on my hormones and just everything kind of went bad. I still made weight, but it was the hardest time I’ve ever had at 125, and it was miserable.” 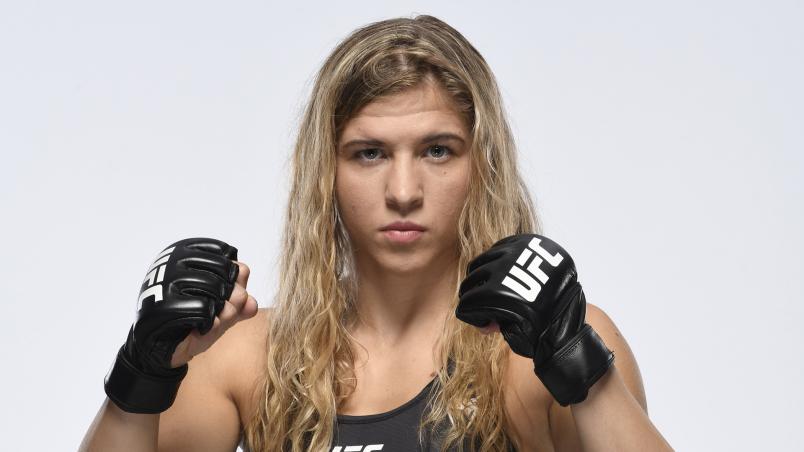 Miranda Maverick poses for a portrait during a UFC photo session inside UFC APEX on July 21, 2021 in Las Vegas, Nevada. (Photo by Mike Roach/Zuffa LLC)

Alongside struggling with her weight management, Maverick also found that the balancing act she’s been carrying throughout her UFC career was beginning to shift from its equilibrium.

“I’ve always been really good at time management, but stress management eventually caught up with me. I had a lot of trouble mentally, I was just getting really stressed, I wasn’t sleeping well, I just felt kind of lost and sick all of the time,” the industrial organizational psychology PhD candidate said. “I spoke with my dad, he’s kind of my mental coach, and kind of just decided to cut off my days at a certain time, and just force myself to sleep. It really helped me, way more than I could have ever imagined it would.”

“I’ve spent less time focusing on school and work and I try to keep my mind focused on the fighting, focused on the end goals, not the means to those ends. Cause at the end of the day, that’s still gonna sit there; the couple of chores I didn’t get done that day, I don’t need to stay up until three getting them done, I just cut off what I’m doing around 10:00 and just go to sleep.”

Now with a clearer focus on nutrition and an emphasis on allowing herself to not do it all, Maverick is able to hone in on a singular goal: becoming the first person to finish Maycee Barber.

“I’m still seeking the finish,” Maverick said with a smirk. “I’ve finished two girls that had never been finished before; that is my thing, that is my signature. I definitely plan on meeting Maycee’s aggression with my own, and showing why we are two of the young prospects in this division.”