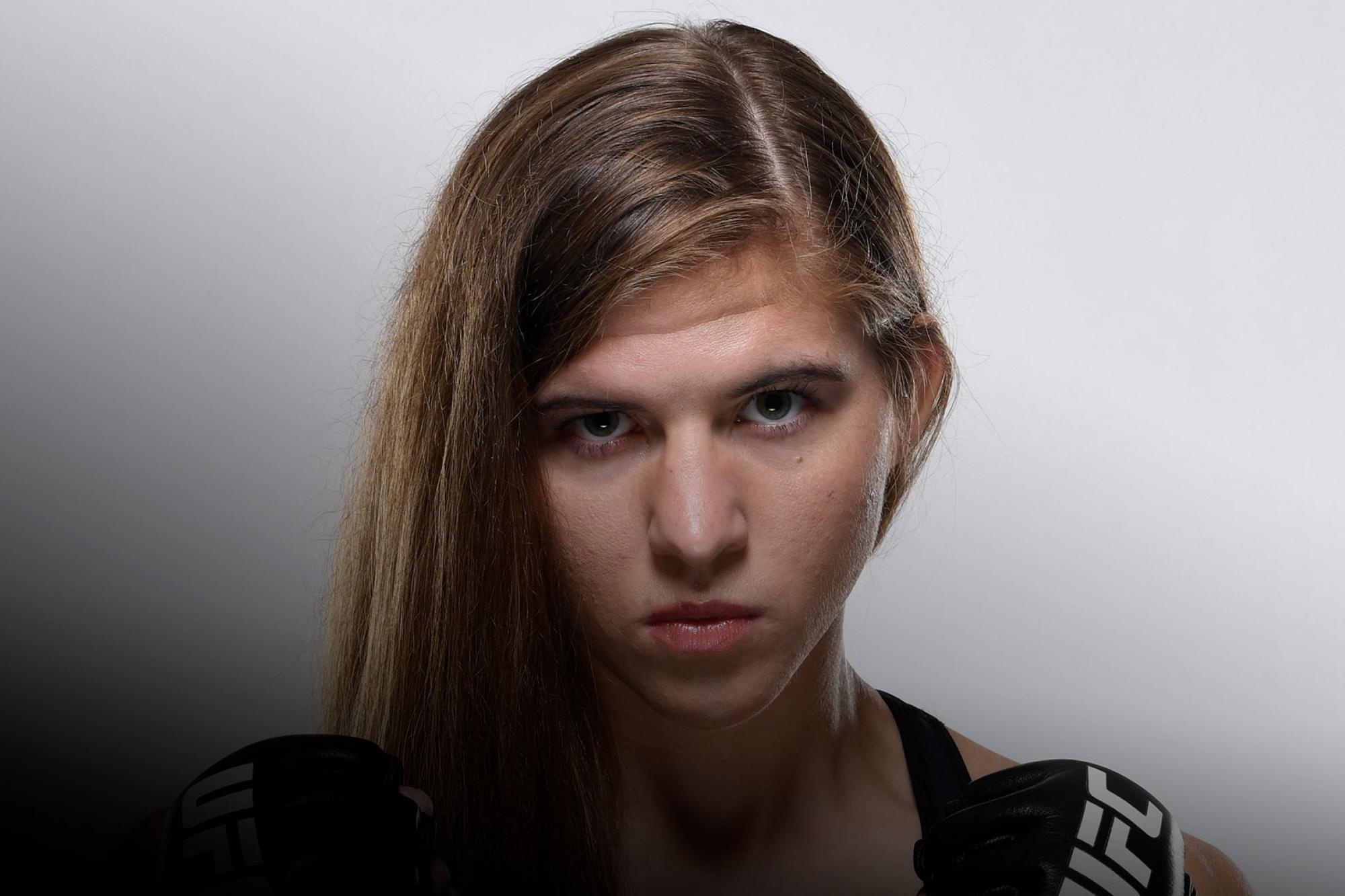 Miranda Maverick is accomplishing one part of her dream this weekend at Fight Island
By Thomas Gerbasi, on Twitter: @TGerbasi • Oct. 23, 2020

No, she didn’t have a bad day in sparring; didn’t read some unkind words on social media from her opponent in her UFC debut this weekend, Liana Jojua; or any other such trivial matter.

“I just got done having a three-hour class in person that was statistics, and I'm just angry.”

The 23-year-old is angry, but she laughs anyway. Maybe it’s because it’s the last thing a fighter getting ready for the biggest moment of her career is doing or thinking about. But that’s the life of a flyweight prospect who is also a student at Old Dominion University pursuing her PhD in Industrial/Organizational Psychology.

Yes, she didn’t even have to say a word to have a mic drop. So how on Earth does she pull this off?

“It's pretty hard,” Maverick admits. “More than anything, I just make sure my days are very planned out down to the 30-minute marks. I work hard at it and keep focused and try not to have anything else on the side. I literally fight and go to school; I don't really have much of the social life that most people my age do and other hobbies and things.”

She can’t even hope for the COVID-19 pandemic to buy her some time with full virtual learning, as two of her classes are on campus. Add in the teaching she does at the university (which is thankfully virtual), and you wonder how she made it to the UFC with such a schedule.

Yet the answer there is an easy one – Maverick is a damn good fighter, a 9-2 pro who only started fighting five years ago when she was 18. And considering that she fought all but one of her fights in the Invicta FC promotion, won their Phoenix Series 2 tournament last year and owns wins over the likes of UFC vets Shanna Young, Pearl Gonzalez and DeAnna Bennett, it’s safe to say that the Missouri native has the goods to one day wear UFC gold.

And that’s the plan.

“Fighting's the dream, school's the backup,” said Maverick. “I want to fight, I enjoy it, I have passion for it, I think I can be the best in the world and therefore I want to see if I have that potential.”

And considering that her father, Cordell, was instrumental in encouraging his daughter to pursue martial arts, there weren’t any awkward conversations at home when Maverick said she wanted to be a fighter and a student.

“Definitely not,” she laughs. “My dad is in my corner all the time. He's the one that encouraged it from a self-defense perspective at first with jiu-jitsu. And when I said I wanted to try out MMA, he was like, 'I think you could be world champ; go for it.' So I truly believe I was raised for it. I don't know any other females especially that have had a father or an upbringing like mine that has prepared me for such a physical and mentally tough sport. And I just assume that if I can be the best at anything in this world, it will be this.”

It’s her body of work, great backstory and talent that had UFC fans eager to see Maverick in the Octagon, and they almost got their wish in June when she was scheduled to face Mara Romero Borella. But an injury took Maverick out of commission, and she’s been chomping at the bit ever since to get a second shot at making her UFC debut.

“The wait is frustrating,” Maverick said before leaving for Fight Island and her UFC 254 bout against Jojua. “I don't even watch fights anymore. I get really upset watching them. I'm like, 'That could have been me three times by now.' Or I watch the women's fights and I'm like, 'I could have beat her.' And the girl I was supposed to fight just got done fighting, and that was hard for me. More than anything, it's just frustrating from a standpoint of age and time. Things keep happening that push it down the road and I keep convincing myself that it's meant to be that way and everything's for a reason, so get over it and have faith.”

I think I didn’t hear her right. Did the 23-year-old say something about age?

“I know I'm young, but that's the whole thing that I get really frustrated about,” Maverick said. “People say, 'You're so young, don't worry about it.' But I'm still getting older. I don't want to be in this sport when I'm 40 years old. I don't want to be barely making the top 30 in the world when I'm 35 years old and be excited about it. I don't think that's anything to be excited about.”

Apparently, this is a young lady in a hurry and ready to get to the top as soon as possible.

Maverick hits 30 in seven years. That’s plenty of time to make her mark in the sport, pick up a belt and leave on schedule. And in the process, if she does what she wants to do, that mark just won’t be visible on her won-loss record, but in the lives she affects as someone who will have left an impression in the worlds of sports and academia.

“That's a whole other reason, morally, of why I do this,” she said. “The fighting is one aspect, but the fact that my work ethic is what can be the example for them is a whole other story. And for the people who are deciding, 'You know, I want to be a professional athlete and I want to go to school,' I have so many kids that I've helped teach or young adults that are in my classes that are like, 'Now I want to try this.'”

Just seeing Maverick do it doesn’t mean it’s easy. And she is quick to let them know the downside of burning the candle at both ends.

“I just tell them the cautionary tale of don't do this if you're not ready to kill yourself,” she said. It sounds half-serious, but it’s probably all serious. “I'm miserable every day and that's one thing I don't show people. I get very little sleep a lot of the time, and in fight camps, obviously I try my best to get enough sleep because that's how you cut weight and that's how you stay healthy mentally. But it's been a struggle. There hasn't been an easy day go by. I'm in the gym, I've got a smile on my face, and I'm the hardest worker in there. But it's not because I'm smiling in my mind. I'm smiling about this prize, this possible future for myself, not the current status.”

One half of that future begins on Saturday. That’s a big deal, but don’t expect it to eat her up.

“I keep my eye on the prize,” she said. “I don't even think about the emotions. I go in there with my faith; I'm a very strict Christian, I believe God's in there with me and there's no reason to be anxious. He takes that all away from me and whatever happens is gonna happen and hopefully I stay safe and my opponent stays safe, too. But at the end of the night, I'm in there to win, I'm in there to get the money. It doesn't matter if there's a crowd watching, it doesn't matter if anybody's there.”