Miranda Maverick Has Her Sights On Taking A Big Step This Saturday Against Gillian Robertson At UFC 260.
By Gavin Porter, on Twitter: @PorterUFCnews • Mar. 22, 2021

Miranda Maverick knew she was ready for anything that could be thrown her way during her UFC debut on UFC Fight Island. She had put in countless hours training both physically and mentally for UFC 254, but it’s not like she could kick back and focus on the fight.

The 22-year-old Organizational Psychology Ph.D. candidate still had to hit the books.

“That part stunk,” Maverick told UFC.com with a laugh. 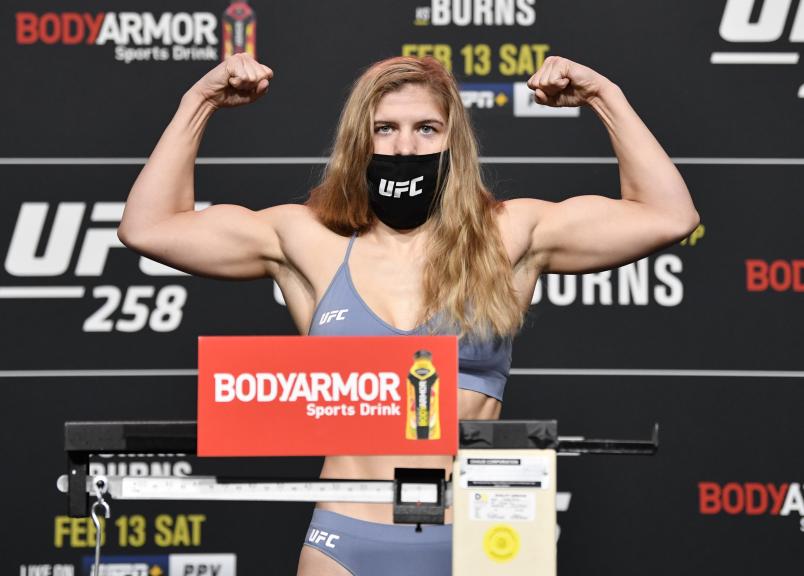 Miranda Maverick poses on the scale during the UFC weigh-in at UFC APEX on February 12, 2021 in Las Vegas, Nevada. (Photo by Jeff Bottari/Zuffa LLC)

“I was doing school at two in the morning during fight week. Just because I’m fighting doesn’t mean I get any breaks,” Maverick joked. “Unfortunately, nobody cares.”

Although she pokes fun at it, Maverick (10-2) certainly made her peers at Old Dominion University proud when she defeated Liana Jojua by TKO (Doctor’s Stoppage) in her debut. It was a big-time moment for Maverick, who came up through the highly respected Invicta FC promotion.

More UFC 260: Look Back At The UFC Heavyweight Championship Lineage | Miocic's Journey To Champion | Updates To UFC 260 | How To Watch UFC 260 | UFC 260 Fight By Fight Preview

Maverick’s path to the UFC was more old school than what we’ve grown accustomed to in recent years, as it’s become more common for fighters to have made their way to the UFC through Dana White’s Contender Series or through The Ultimate Fighter. She just won fights in dominant fashion until the right opportunity came along.

Then she made the most of it. 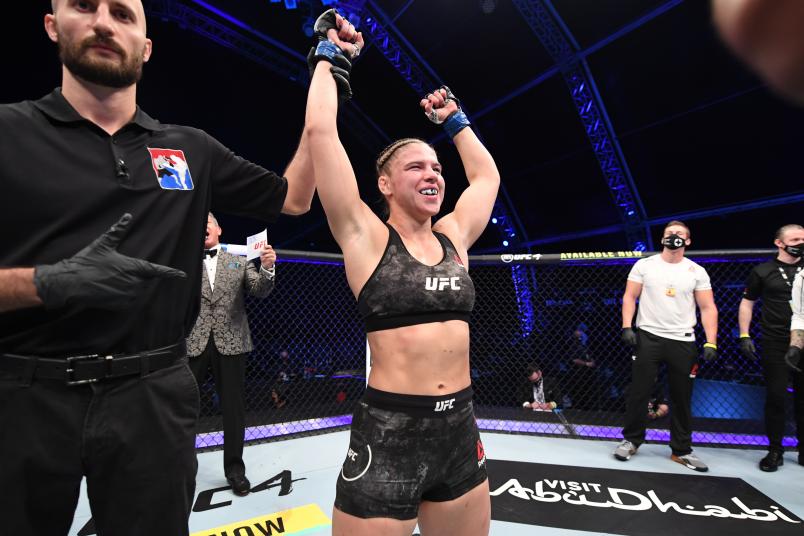 “I’m in the UFC, it’s my dream. There is no more being careful when I fight, making sure I do everything perfect. I’m going in there to be the best version of me and I’ve already gotten my skill level to where I need it to be and I’m just adding increments to it every single time I walk into that cage,” Maverick said. “And this time is no different. I plan on showing the world who Miranda Maverick is, and I plan on getting everyone’s attention while doing it.”

Maverick faces a much more difficult task this Saturday at UFC 260, when she takes on Canada’s Gillian Robertson in a battle of young flyweight prospects.

In just nine UFC fights, Robertson has already accumulated the most women’s flyweight fights in history and the most submission wins by any woman in UFC history. That’s a big step up in competition for Maverick and it’s exactly the type of challenge she wants.

“I’d like to look like I’m one of the best in the world,” Maverick said confidently. “Go out there, put on a show, not only just beat Gillian, but beat her very dominantly.” 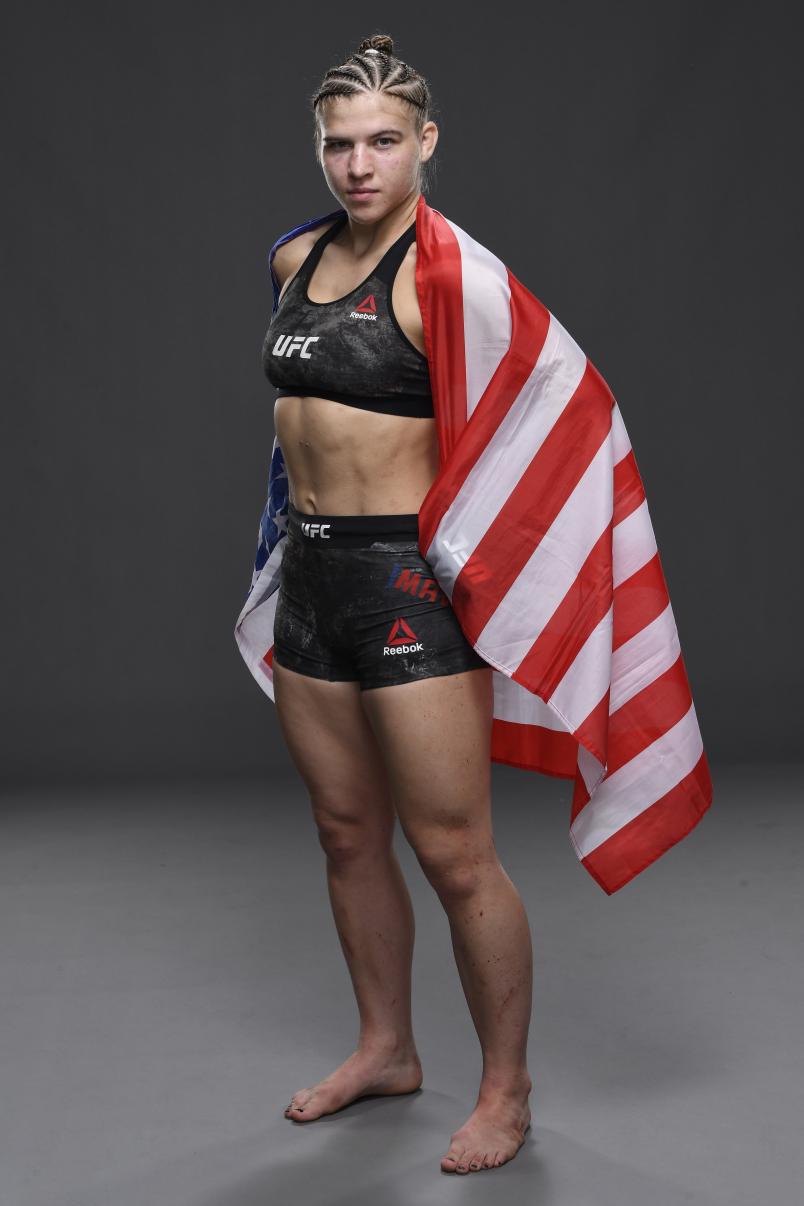 Maverick is wary of Robertson’s world-class grappling and is determined to show that she can handle “The Savage” wherever the fight goes. In order to do that she will need to fight to her strengths - physicality and pressure - and be ready to utilize her biggest weapon – Fight IQ.

“Somebody’s Fight IQ might be good in terms of their techniques and talents they walk into the cage with, but as soon as they face adversity, a lot of people can only go one route or focus on their game plan only. I’m very good at changing up my game plan when I need to,” Maverick said. “I’m not intimidated by her and I’m not going in there exactly focused on what her skill set is; I also look at what mine is.”

A win over a seasoned, respected fighter like Robertson will put Maverick right into the thick of things at flyweight. Competing against the best has always been the main point of emphasis for Maverick, and taking out Robertson will show the world she’s ready for that step. 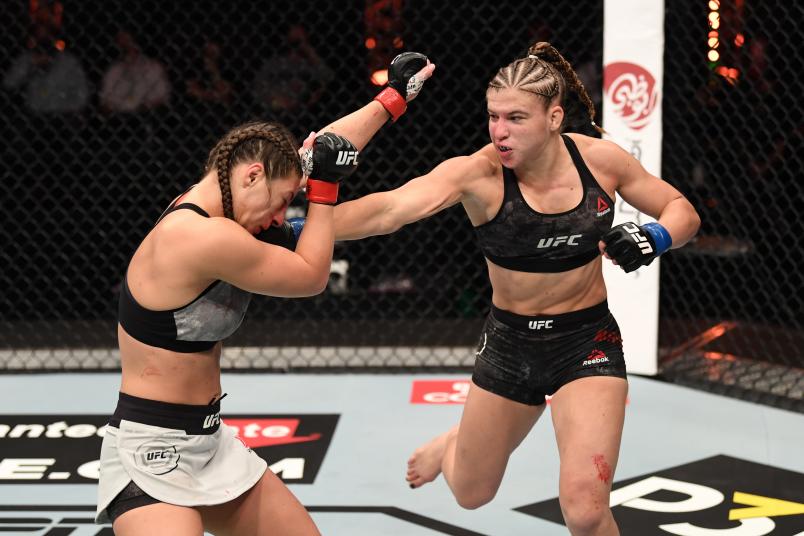 “I take one fight on at a time. The momentum is obviously there, but I just plan on keeping the momentum by training. It’s not in the back of my mind of ‘Ok, I’ve won this many fights, I have to keep the streak going.’ It’s just in my mind that I need to get paid and keep moving up the ladder and come here to do what I do and that’s to be the best in the world.”