Miranda Granger has waited nearly a year to return to the Octagon and she can't wait to throw down with Ashley Yoder at UFC Vegas 14.
By Gavin Porter, On Twitter @PorterUFCNews • Nov. 11, 2020

Miranda Granger has never shied away from adversity.

She didn’t hesitate to make her UFC debut on three weeks’ notice or to fly to South Korea on two weeks’ notice to fight at UFC Busan. She didn’t let her first career loss hold her back or an unexpected blood clot issue slow her down.

Granger’s first year in the UFC was undoubtedly a wild one, and while it wasn’t what she expected, she’s certain that when she steps foot in the Octagon for the first time in nearly a year, she’s going to send a message.

“Whoever is next is in trouble,” Granger told UFC.com in August, the day after her matchup with Nadia Kassem was cancelled. “It can only go up from here and now I’m just kind of taking it in stride. Everything that happens, I’m just going to come out a better fighter because of it. I’m going to be more eager and more determined when I do get the chance to fight. I think the patience in this situation is going to make diamonds.” 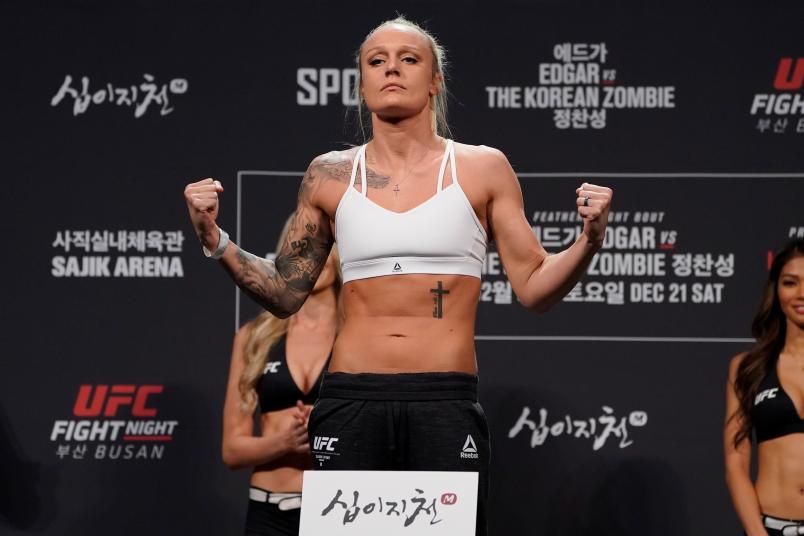 Miranda Granger poses on the scale during the UFC fight night weigh-in at Sajik Arena on December 20, 2019 in Busan, South Korea. (Photo by Jeff Bottari/Zuffa LLC via Getty Images)

“I’ve never been so ready for a fight,” Granger told UFC.com with a smile. “I think stylistically we match up really well. It will be the first time that I’ve actually fought someone who is my height. Usually as a strawweight, I’m a pretty big strawweight, so I’m fighting girls who are shorter than me so that’s exciting. I know Ashley is good. She’s been in this sport for a really long time, I respect her, and I respect her game. But I’m ready and I’m going to throw down, so I’m excited.”

When Granger (7-1) suffered her first defeat at the hands of Amanda Lemos at the end of 2019, it forced her to reevaluate a few things, including where she was at mentally. After dealing with blood clots in her legs for months, Granger believes she found that passion and love for fighting again, and by harnessing that energy she had one of the best training camps of her career.

That mental transformation has given Granger more confidence than ever, and she’s ready to let loose and deliver against Yoder.

“I think my mentality is what changed. Just letting myself getting to that dark place again and being in the fight over and over again and almost driving myself crazy. That’s what I need. I need that misery, I need that pain, I need that suffering,” Granger said. “I just think that I’m getting back to my roots. That Miranda that everyone knows and loves from the first time that I started fighting, she’s going to be back in that cage.”

The first glimpse of what Granger brings to the Octagon came in the form of a unanimous decision victory over Hannah Goldy. It was an impressive debut, showing that the Charlie’s Combat Club product deserves to be in the big show.

This weekend, Granger is out to prove that she not only deserves to be in the UFC, but that she’s ready to compete with the best the division has to offer.

“I just feel like I haven’t had the opportunity to show what I’m all about,” Granger said. “Prior to the UFC I’ve always had full camps so I’ve always felt like I went in there with complete readiness, and my first two UFC fights were short notice, so to get this full camp, I feel like myself again and I’m just really hungry and ready to get in there.”