Mir Representing the Grapplers at UFC 169

"I think whether it's a knockout or a submission, those are the only two ways this fight is going to end." - Frank Mir 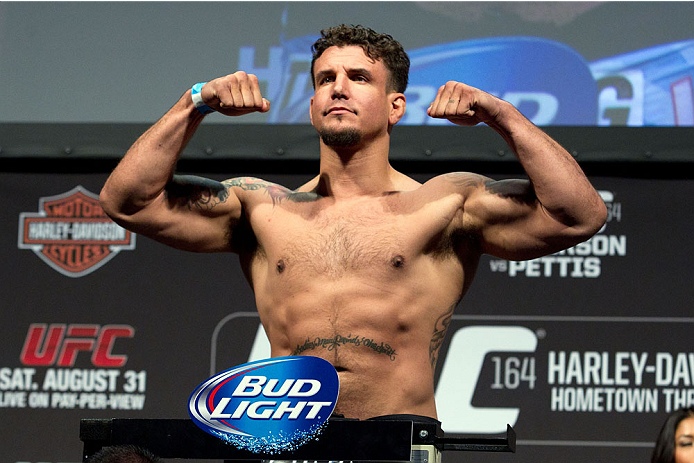 It’s the classic matchup that has been contested a thousand times inside the Octagon and, arguably, was the very archetypal fight that the UFC was created to decide. In fact, no arguments needed, seeing if the one can keep the fight standing or the other can take it to the ground, where the respective martial artist can use their background’s expertise to finish the fight, is exactly why the UFC was started over 20 years ago.

That’s right, on February 1st at UFC 169, the main event may be bantamweights battling for the belt, but two dangerous and proficient fight finishing heavyweights will collide as Mir takes on Overeem.

As Mir might as well be called “Mr. UFC,” with his 12-plus years in the company and entering his 23rd fight inside the Octagon (a record in the heavyweight division), Mir has evolved greatly as a well-rounded threat throughout his career, but in many ways he’s still the same fighter who made his UFC debut submitting a sixth degree Brazilian jiu-jitsu black belt via armbar in a little over a minute. Mir has shown he can engage on the feet, but no one will be surprised to see Mir go back to his bread & butter against Overeem.

“You always want to take a person to where they're not as strong at,” tells Mir. “Obviously, Alistair is much more proficient in his stand-up than on the ground. Not that his ground game is absent. He's submitted people, so it doesn't mean you can fall asleep on him there, but I think he's less dangerous there. There's not a lot of intrigue going into the fight about wondering what the other guy wants to do. I think both of us have a clear cut idea of what the other guy is trying to pull off. That's what it's going to come down to, his ability to avoid the takedown and stay on the feet and my ability to get the fight to the ground.”

The 34 year old with a 16-8 pro record is not enjoying a three fight losing skid, which is really more about Mir’s back-to-back losses in 2013. The first was a clinch-a-thon with two-time Olympic wrestler turned undefeated MMA fighter Daniel Cormier. The second was a decade in the making bout against fellow former UFC heavyweight champ Josh Barnett, which was a first round TKO loss for Mir, but a possible quick stoppage following a knee to the face that dropped Mir. Add to that, the meeting with Overeem was scheduled for last November, but it got pushed back to February.

Obviously, it’s a calendar year Mir would like behind him, and a much needed win over “The Reem” could be the sweet sorbet to cleanse the cage-fighting pallet.

“I thought the fight with Josh was stopped too soon,” asserts Mir. “I thought the fight was supposed to be stopped when we cannot ‘intelligently defend’ ourselves. When I got hit, I wasn't out. I got hurt. I wasn't really given the opportunity to try and continue on in the fight. I think it was a fast stoppage by anybody's standards. I was given the opportunity to fight Alistair on November 16th. It was like a week after the fight and I jumped on it immediately because I was coming off a fight that I was unsatisfied with, especially one where the referee was a more influencing factor than anything. I want to get back in there and get another fight under my belt to help erase the last one.”

As mentioned, up next, at UFC 169 in Newark, New Jersey, Mir will match his kimuras against the kicks of Overeem. The 33-year-old with a pro record of 36-13, 1 NC, Overeem is also coming off a bad 2013 where he was on the wrong end of back-to-back Knockout of the Night winning bonuses. Prior to those losses, Overeem was riding an unbeaten tear for six years, which hit its zenith with the first round TKO body kick finish of former UFC heavyweight champ Brock Lesnar at UFC 141.

Easily, the strangest aspect of Overeem’s two losses is that he was winning both bouts only seconds before losing them. Last February, Overeem was up two rounds to none on Antonio “Bigfoot” Silva and then was KOed in the opening moments of the final stanza. In August against Travis Browne, Overeem nearly finished “Hapa” with those aforementioned devastating knees, but Browne summoned some inhuman strength to get back to his feet and then ended the bout with an uppercut-like front kick.

“I think it's the heavyweights,” explains Mir. “[Overeem’s] a striker and he fights in that area a lot and it's live by the sword, die by the sword because he's standing up with guys who are high level fighters also, so he's getting caught. Travis Browne is a great well-rounded fighter and I don't think people expect someone who is 6'8" to kick as athletically as Travis can, so that catches a lot of people by surprise. With 'Bigfoot,’ he was dominating the fight until he got tired in the third round and 'Bigfoot' turned it on. It hasn't been like he's been getting blown out. He's actually been doing very well in his fights and then getting caught.”

A common thread among many of Overeem’s losses is a questionable gas tank. Generally speaking, hulking masses like “The Reem” are not known to be cardio machines, as it takes a lot of oxygen to make those big muscles work. Nevertheless, Overeem’s endurance was questionable when he fought at much lower weight divisions as well. It’s a hole in Overeem’s game that Mir is well-aware of and has motivated him to make sure he’s in the proper shape to take advantage of it.

“I think it has to do with what kind of athlete he is,” affirms Mir. “Obviously, Alistair has a lot of quick twitch fibers, he’s explosive, and a very strong guy. If you watch boxing, guys who are very powerful and hit hard, they usually don't have long-time endurance. In kickboxing, I think he's so high level he knew how to pick his spots and how to cruise. Sometimes it's harder to do in MMA. That's definitely inspired me to make sure I'm in good shape. Knowing it's an opponent's weakness, it makes you want to push harder, so I can try and capitalize on it.”

In preparation for Overeem, Mir has kept things local to the city he was born, bred, and still resides: Las Vegas, Nevada. The past couple camps Mir has traveled to Albuquerque, New Mexico to work with Team Jackson-Winkeljohn, but because of the fight being pushed back, plus the holidays, Mir stayed close to home and worked with his usuals, like longtime boxing coach Jimmy Gifford.

Another reason for Mir to stay in “Sin City” is that it’s wrestling season, and his coach just so happens to be the rising star wrestling coach of Bishop Gorman High School: Ricky Lundell. If Mir wanted to get in a lot of quality time on the mats with the Pedro Sauer BJJ black belt then he has to learn to share Lundell with the blue and orange Gaels.

“I'm going to try and push the issue,” states Mir. “I'm going to come forward and try and get a takedown. I think backing up and running away from Alistair will make it hard for me to grapple with him and put him on the ground. I think when I do, I think submitting Alistair as soon as possible would be the safest way for me to make sure he doesn't knee me anymore.”

This Saturday in “The Garden State”, fighting philosophies will collide as the stand-up takes on the ground as Overeem meets Mir. “I think whether it's a knockout or a submission, those are the only two ways this fight is going to end,” declares Mir, who will look to chalk up another W for his illustrious career and for the grapplers of the world.