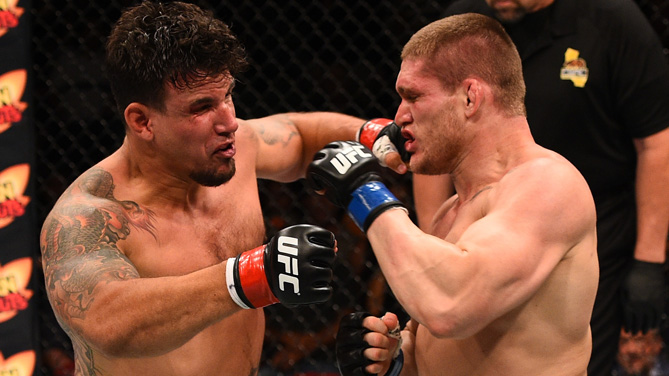 Frank Mir punches Todd Duffee in their heavyweight bout during the UFC event at the Valley View Casino Center on July 15, 2015 in San Diego, California. (Photo by Jeff Bottari/Zuffa LLC)" />
Written off by practically everyone in the MMA world entering 2015, 36-year-old Frank Mir now has two consecutive knockout victories, the most recent coming in a thrilling slugfest Wednesday night at the Valley View Casino Center in San Diego, as he dropped and stopped Todd Duffee in less than a round.

“I went out there and beat a young stud at what he does best – just throw leather, throw explosive, throw hard,” Mir said. “I fought a little emotional and I usually don’t do that. I try to be crafty. But I just bit down on my mouthpiece and I was going to swing for the fences.”

Mir and Duffee wasted no time throwing bombs, much to the delight of the crowd. Duffee got rocked several times by left hands, but just when it seemed as if the veteran was about to put the fight away, Duffee jarred Mir with flush shots of his own. But Mir was not going to be denied this one, and a flush left cross put Duffee down face first and ended his night, referee John McCarthy stepping in immediately just 73 seconds into the bout.

With the win, the number 10-ranked Mir, who halted Antonio “Bigfoot” Silva in February to snap a four-fight losing streak, improves to 18-9; the 29-year-old Duffee falls to 9-3.