Miocic won not just for him, but for Cleveland 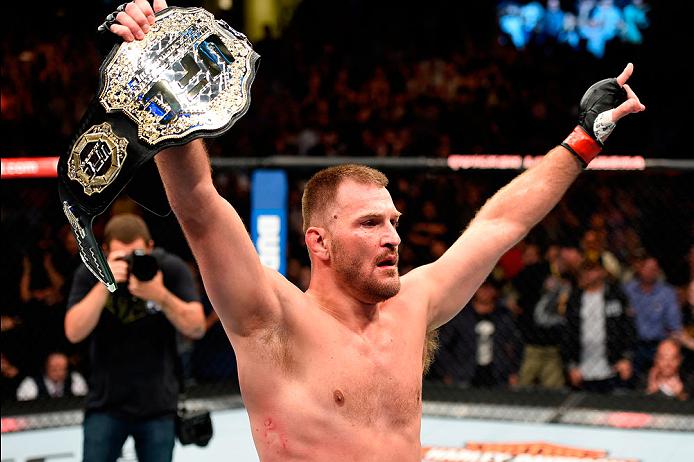 Over the last couple years, any time you spoke with Stipe Miocic and asked him about his aspirations inside the Octagon, the easy-going heavyweight would always speak of bringing a championship home to Cleveland.

For more than 50 years, the loyal, passionate fans in the area had endured a handful of near misses and an abundance of “not even close” seasons on the diamond, the hardwood and the gridiron, and as he ascended the heavyweight rankings, it always seemed like being able to bring UFC gold back to “The Land” was as important to Miocic as earning the championship victory would be for himself.

In May, the mild mannered knockout artist turned his dream into a reality, knocking out Fabricio Werdum in Curitiba, Brazil to close out UFC 198 and give Cleveland its first sports championship in more than half a century.

A few days later, Miocic appeared at a Cleveland Cavaliers playoff game, brandishing his new belt and sending the already electrified crowd into hysterics as he implored LeBron James & Co. to follow his lead and win the NBA title, which they did. When it came time for the Cavs victory parade, there was Miocic, smiling ear-to-ear, snap-back turned backwards, shiny gold belt on his shoulder, loving every minute of it and pumped to see his city finally getting to experience championship success.

For an encore, Miocic brought the UFC home with him, as his first title defense against Alistair Overeem headlined UFC 203, the organization’s inaugural event in Cleveland, in mid-September. Those in attendance throughout the week left no doubt whom their favorite fighter on the bill was, as Miocic was greeted by applause and ovations at every event leading up to fight night and when he walked through the curtain in “The Q” with Machine Gun Kelly’s “Til I Die” bumping through the in-house sound system, the place went nuts.

While fans often think of fighting at home as a major plus for UFC athletes, many of the men and women that step into the eight-sided proving ground will tell you that they prefer road games, as competing close to home often comes with far more requests, either from the media, friends and family or long lost high school acquaintances who “will be happy with two seats anywhere” because they just want to be there to support you, old buddy.

For Miocic, the positives greatly outweighed the negatives and the close group around him helped make everything easy. Plus, getting dropped early in the first round on his home turf helped shake out any of the cobwebs and get him back on track as well.
RELATED: Rankings Report talks Miocic's rise | Fighter bio | Stipe defends crown in hometown

“There’s a little bit of pressure, of course, but I took it in stride and it was no big deal,” the 34-year-old champion admitted. “I have great coaches, an amazing wife and family that have my back, so I was good to go. I got hit with that first shot and I think I was fine after that.”

That first clean shot Overeem landed sucked the air out of the Quicken Loans Arena, as Miocic dropped to the canvas and the challenger swarmed, looking for the finish. It was the first time the Ohio native had been dropped since his close duel with Junior Dos Santos and it briefly looked like the chaos that had consumed a number of champions earlier in the year would get the best of Miocic as well.

But he weathered the storm and avoided a guillotine choke attempt, eventually returning to his feet, resetting and going 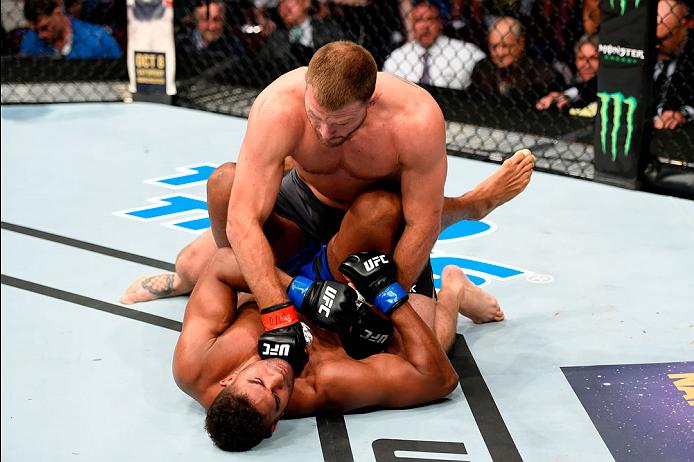 on the offensive himself, earning the stoppage win with just over 30 seconds remaining in the opening frame.

“He came in with a kick and came back around and I kind of squared up, kept my hands down and got crushed with that left,” Miocic said, recalling the blow that put him on his backside. But rather than dwell on the defensive error that got him dropped, the now 16-2 heavyweight kingpin is focusing on the fact that he didn’t get stopped and was still able to rally back and collect the victory before the horn sounded to end the opening round.

“I think about those things, definitely, and you’ve got to evolve as a fighter every day,” offered the Strong Style Fight Team standout. “So I’m doing that – watching the film and continuing to work on stuff. No matter what, there are things you can still work on. We’ll find something – every camp and every time I train, I try to get better every time.”

As of right now, there is no timetable set for the champion’s return. After earning a trio of victories and headlining a pair of successful Pay-Per-View events – one on the road, one at home – the newly married champion has earned a little down time, but he doesn’t plan on being away too long.

“I’m a little beat up and tired, so (the organization is okay with me taking a little break),” he said. “Hopefully sometime in the spring would be great. I’m not trying to take a whole year off like some of those other guys, but after four, five months to myself, I’ll be ready to go.”

And his plans going forward haven’t changed either.

“Keep winning; keep that belt for a long time,” he answered when asked what he can do for an encore in 2017. “Like I said after the fight, I’m not giving that thing up for a long time.”