Miocic vs Ngannou set for UFC 220 in Boston 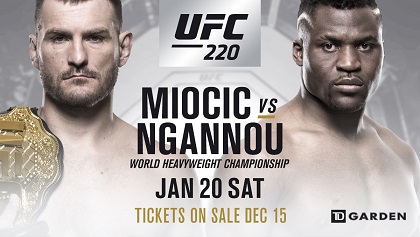 The UFC's return to Boston on Jan. 20 will get 2018 off to a rousing start with a pair of world championship fights at TD Garden that will make UFC 220 an event to remember. In the main event, it's one of the most highly anticipated heavyweight championship fights of all-time, as Stipe Miocic defends his crown against devastating knockout artist Francis Ngannou. Plus, the UFC light heavyweight title will be on the line when Daniel Cormier risks his belt against surging contender Volkan Oezdemir.

Tickets for UFC 220, which airs live on Pay-Per-View, go on sale on December 15.

In the storied history of the UFC heavyweight division, no one has successfully defended the title three times in a row. This January, Miocic is on the verge of history, but to get there, he has to follow up his wins over Alistair Overeem and Junior Dos Santos by turning back the most imposing threat to his crown in the form of Cameroon's Ngannou, whose back-to-back demolitions of Andrei Arlovski and Overeem have fans already anointing him as MMA's next great big man.

Eager to defend his crown once more, two-time Olympian Daniel Cormier is adding to his legacy with each fight, and after defeating the likes of Alexander Gustafsson, Anthony Johnson, Anderson Silva and Dan Henderson over the last three-plus years, he wants to begin 2018 with another stellar victory when he meets Oezdemir, a Switzerland native who made a name for himself in the Octagon with wins over Ovince Saint Preux, Misha Cirkunov and Jimi Manuwa, the latter two victories taking a combined 70 seconds.