The heavyweight title main event between Stipe Miocic and Francis Ngannou has a different feel than most fights. The champion Miocic – winner of five straight all by knockout – is one win away from breaking the record for most title defenses by a heavyweight champ in history.

On Jan. 20 in Boston, Massachusetts at UFC 220 (the first Pay Per View event of 2018), Miocic is the underdog against the rising phenom Ngannou. 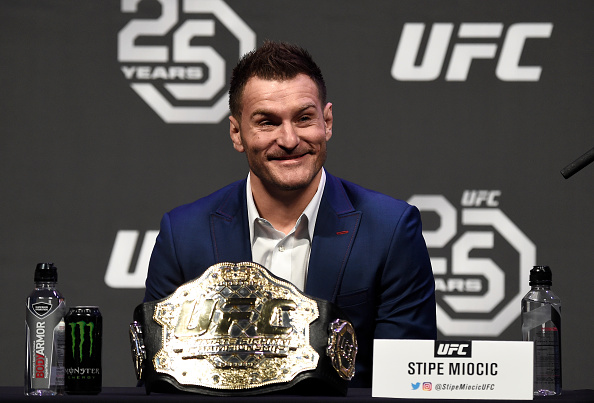 The champ isn’t bothered by the seeming lack of respect from bookmakers. He looks forward to proving people wrong once again.

“I’m the underdog… That’s what the betting line said. But I’m used to that,” Miocic said Friday at the UFC 220 pre-fight press conference at T-Mobile Arena in Las Vegas. “I’m pretty much the underdog in all my fights. I like being the underdog because I like shutting people up. People start betting against me and they lose a lot of money.”

The fight against Ngannou is different because there hasn’t been a heavyweight to come along with this much hype since Brock Lesnar. “The Predator’s” punching power is seemingly unrivaled and the Cameroon product demonstrated as much at UFC 218 in Detroit with a forever highlight upper cut that floored legend Alistair Overeem.

Miocic said he isn’t intimidated by the power because he signed up to fight the baddest dudes in the world, but Ngannou thinks he’s lying. 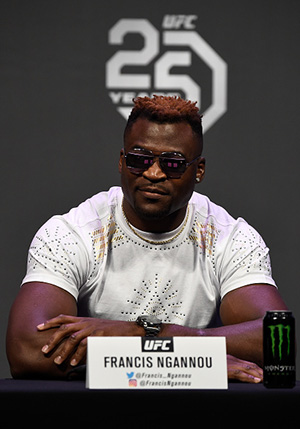 “Of course, he’s really intimidated,” Ngannous said. “He knows what’s going to happen. I know he’s just making proud here, like, ‘Yes, I’m the champ.’ But he knows the guy he’s going to fight. It’s a fight like he’s never had in his career.”

The fight is just three weeks away and Ngannou said that his camp is over after preparing for both Overeem and Miocic the past few months because a win against “The Reem” meant a date with the champion.

Asked how Miocic will handle his power, Ngannou thinks he’ll be in survival mode from the very beginning.

“Whatever he is going to try I’m going to catch him,” he said. “I’m going to connect and you know what happen when I connect.”

Miocic is happy to defer to Ngannou as far as hype and promotion goes. He’s a small-town guy and he’s focused on only one thing before his potential record-tying title defense.

“I’m a Midwest dude and I don’t need all the hoopla,” Miocic said. “He deserves it he’s a big dude and he hits hard. Good for him let him get all the hype he wants. I’m going to keep doing what I do and win.”