Miocic Refuses to Lose in Quest for Gold 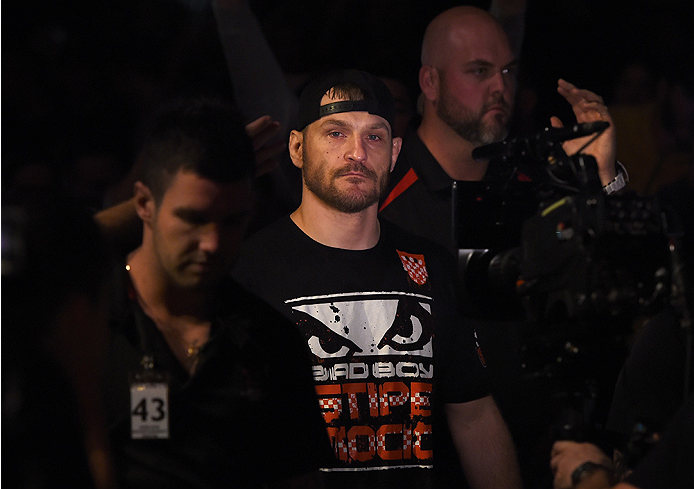 There is a noticeable resilience in Stipe Miocic.

Whether it’s a natural quality that comes from his Midwestern roots or the majority of his life being in some form of athletics - or both - the heavyweight contender isn’t the fading type. The Cleveland representative is simply no stranger to hard work or having to earn every inch gained during his athletic career, and his persistence has produced successful results time and time again.

“I don’t think people understand it because they don’t know what it’s like to go through it,” Miocic explained, describing what it takes to survive the Midwestern winters. “You can’t live in the part of the country I do and not get tougher in some form or fashion. Having to battle five months of lousy and dangerous conditions outside and long stretches where you may not see the sun and everything is gray. It takes a tough person to get through that and I believe you see that quality in fighters from this region. We don’t break mentally.” 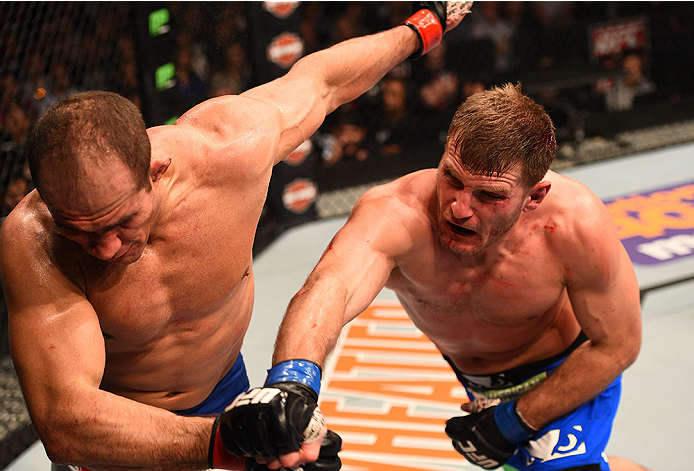 Natural toughness has become a calling card for Miocic and that, mixed with top-notch boxing and wrestling skills, has allowed the the heavy-handed former standout athlete from Cleveland State University to become a certified player in the hunt for a shot at the most prestigious title under the UFC banner. Miocic has set his sights on becoming the UFC heavyweight champion and he will do whatever it takes until that dream is realized. Whether the chance to do so comes with this fight or the next, he’s not going to stop his campaign for a shot at the throne.

The 31-year-old’s efforts to lock down a title opportunity fired up after he put a record number of strikes on former interim title challenger Mark Hunt during their collision back in May, as he steamrolled “The Super Samoan” and added the highest profile win of his career to his resume. As to plan, Miocic let the world know he was ready to make a run at his ultimate goal, and he’s undoubtedly drawing within striking distance of making that happen.

“The victory over Hunt showed everybody that I belong at the top of the division. There was a lot of doubt being thrown my way heading into that fight. People were saying I was going to get knocked out in 30 seconds and I didn’t stand a chance against him. I went out there and broke the record for the amount of strikes landed in a heavyweight fight and dominated a tough and dangerous fighter like Hunt from start to finish. That win and my performance shut a lot of people up and I love it. I love proving people wrong and I’m going to continue to silence my critics on my run to the title.”

The Ohio-based smashing machine’s next showing will come against resurgent veteran Ben Rothwell in a bout that is set to have a major impact on the state of the title race in the “big boy” division.

Both Miocic and Rothwell have hovered around a shot at the heavyweight crown in recent years, and the winner of their co-main event showdown in Dublin, Ireland on 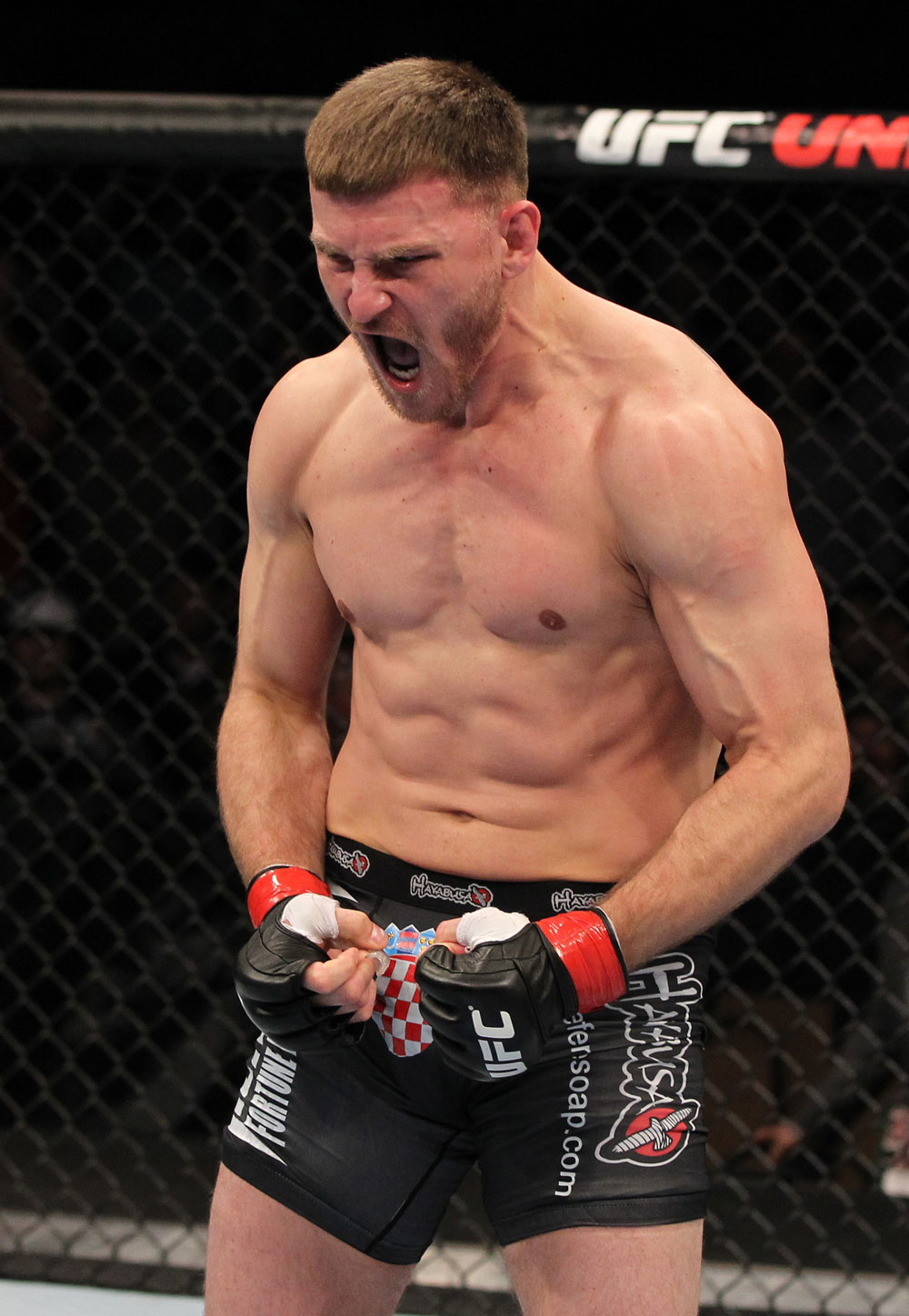 October 24 will make a rock-solid case for contention. Miocic knows “Big Ben” is going to bring a variety of threats into the Octagon, but when talking about the upcoming fight and his road to the heavyweight title, that ingrained resilience begins to show through. It doesn’t matter what Miocic has to do to get there because he believes he will always end up where he’s aiming to go.

“I’m going to be the heavyweight champion. I’m going to get there and nothing is going to stop that from happening. I wanted to get the title shot for my next fight but it looks like I’m going to have to win another fight before I get the opportunity to fight for the belt. If I have to take another step and beat another tough guy, then so be it. There is nothing that is going to stop me from getting that title and I’ll do whatever it takes. Ben is a tough guy and a veteran, but I’m going to win that fight no matter what.

“Look at all the guys I’ve fought so far and big and durable isn’t anything new to me. I know Ben is going to be hard to put away, but that’s a challenge I’m looking forward to. He’s a tough guy and I’m not looking past him one bit. The only thing on my mind is getting that W.”

Miocic knows his key to the title shot he’s been envisioning rests in defeating Rothwell, but facing the Wisconsin native is just the next step in a bigger journey of progress. Less than four years ago Miocic was a highly-touted prospect coming out of the Ohio regional scene when he faced veteran Joey Beltran in his Octagon debut at UFC 136 in Houston, Texas, and now he’s a certifiable threat to the divisional crown. It’s taken a lot of hard work to bring that transition to life, but hard work and personal investment is something Miocic has never shied away from.

“I’ve come a very long way since my first fight and it’s been great to see all the hard work I’ve invested inside the gym pay off,” Miocic said. “I really owe it all to my coaches and training partners because they’ve always pushed me. I also think my versatility absolutely sets me apart from the other guys in my division. I can do everything pretty well and I have the work ethic to back it all up. I also hate losing at anything. Even if it’s ping pong or board games, I’m not going to lose.”