Miocic Has His Mind Made Up

Although Stipe Miocic is enjoying fatherhood, when it comes to fighting, he only wants one thing: a rematch with Daniel Cormier
By Zac Pacleb - UFC.com • Jan. 8, 2019

The lack of sleep.

But five months after his daughter was born, it’s been smooth sailing.

“Within two months, she was sleeping through the night,” Miocic told UFC.com when we met him in Toronto before UFC 231. “It was crazy. I mean, of course here and there, she’ll wake up, but most of the time, if she does wake up, she’ll go to bed around 7:30 or 8 (p.m.), but she’ll go to bed a little later, which is nice because I can sleep in a little more. But she’ll wake up around 10:30 (p.m.), want a bottle or something, that’s it.”

Between raising his newborn, working as a firefighter and training, life is pretty simple and straightforward for the former heavyweight champ since losing his belt to Daniel Cormier at UFC 226.

Fresh off of his record-breaking third heavyweight title defense over Francis Ngannou at UFC 220, things were going as planned for Miocic about four minutes into the first round of his superfight with Cormier. Both fighters were landing shots and staying busy, but in a flash, Miocic found himself on the canvas as Cormier raised his arms in triumph.

With his six-fight winning streak snapped and the heavyweight belt in some else’s possession for the first time in two years, it seemed like a rematch was in order, and Miocic didn’t waste any time in calling for one.

Instead, Cormier stood across from Derrick Lewis at UFC 230, defending his title with a first-round submission. Since the loss, Miocic has consistently called for another shot at Cormier, and when asked what his plan is in the coming months, his intentions are singular.

“I want a rematch. That’s all you need to know,” he said.

With rumors of a potential fight between Cormier and Brock Lesnar and an increasingly crowded field near the top of the division, Miocic’s insistence for a rematch could leave him at-risk for the longest stretch of inactivity since he entered the UFC. Factor in Cormier’s impending retirement, and one could reasonably think Miocic should fight someone else in the meantime, right? 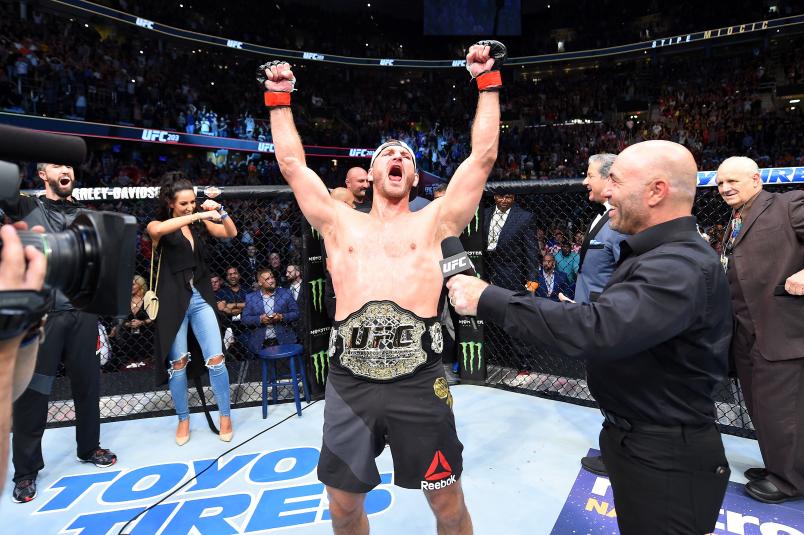 So until he gets another shot at the double-champ, life goes on as it has been for Miocic, which begs the question:

What’s harder, being a parent or being a cagefighter?

“With my baby right now, knock on wood, it’s actually harder to be a cagefighter because she’s actually an awesome baby,” Miocic said. “We have a routine. I wake up in the morning, she’s like, ‘Wah.’ I’m like, ‘What’s up, girl?’ She gets all excited. I pick her up, change her, she smashes a ton of food, and we watch Puppy Dog Pals or Mickey (Mouse Clubhouse). She passes back out for another hour-and-a-half, so I take another nap with her.

After his record-breaking title defense kicked off 2018, Miocic told Joe Rogan that “none of this means s***. I’m having a baby.” With life as a dad going about as well as he could hope, his focus to start 2019 remains on retaining the heavyweight strap.

“I’m going to get the belt back,” he said. “I’ll get my rematch, I’ll get my belt back, so I’m not worried about it. That’s all. Just a few bumps in the road. Whatever doesn’t kill you makes you stronger.”