Miocic eager for title shot - whenever it happens 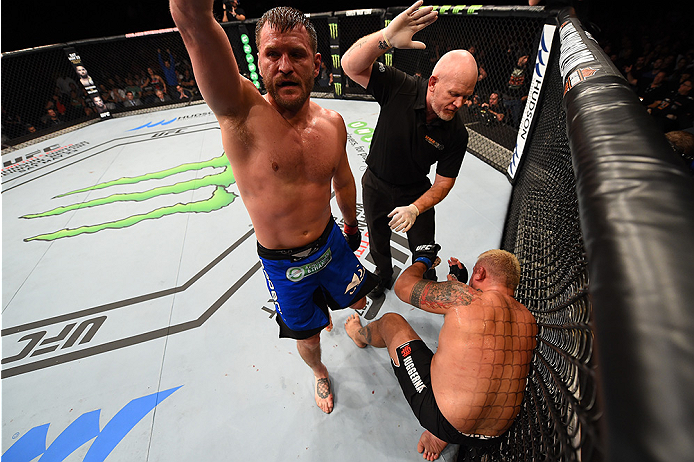 For someone that could have been fighting for the UFC heavyweight title last Saturday night, but wasn’t, Stipe Miocic was certainly in good spirits, though he admitted it had been a rollercoaster week.

“It was like that movie (Anchorman) with Ron Burgundy – I was in a glass case of emotion,” the heavyweight contender joked, holding court in the press room during the preliminary portion of last weekend’s UFC Fight Night event at the MGM Grand Garden Arena. “I was up and I was down; it was crazy. It was terrible, but you learn from it, you become stronger from it and I’ll be fine.”

Tabbed to replace an injured Cain Velasquez opposite Fabricio Werdum the previous Sunday afternoon, Miocic didn’t even get to be a title challenger for 24 hours as the following day, the Brazilian champion announced that he too was dealing with a series of injuries and would not be facing the 33-year-old American.

Werdum did say, however, that if Velasquez had not withdrawn from the contest, he would have pushed through the injuries and defended his title, which raised a few eyebrows.

“You can call me a hypocrite because I was supposed to fight Ben Rothwell back in October, but I literally couldn’t stand or walk. I got an MRI done and clearly my back was injured and I really couldn’t fight. I felt terrible and I wanted to fight him. If I was able to fight and put on a show, I would. It was a bad choice of words, I guess. I would never say that.”

Miocic established himself as one of the top contenders in the division in 2015, building off a narrow decision loss to former champion Junior Dos Santos on the penultimate fight card of 2014 with back-to-back stoppage wins over Mark Hunt and Andrei Arlovski that showcased his vast and varied talents in the Octagon.

The win over Hunt was a multiple-round drubbing that was finally waved off midway through the fifth where Miocic set the record for significant strikes landed in a heavyweight fight and utilized his wrestling to keep the heavy-handed Australian off his feet and incapable of connecting with a knockout blow. His victory over Arlovski was the exact opposite – a swift, sudden stoppage with clean strikes rocking the surging former champion early and bringing the fight to a close in under a minute.

When Velasquez went down, Miocic was the obvious choice to replace him and UFC President Dana White reached out to see if he was interested. But first he had to wake Miocic from an afternoon nap.

“I was watching a football game and I ate a bunch of food, so I was out cold and Dana called me,” the proud Cleveland native laughed. “It was the most monotone conversation ever. Most people would be like, ‘OH MY GOD!’ but I was like, ‘Yeah, I can fight.’ I think I was in shock that I was fighting for the title, that it was finally here.”

Not one to let the opportunity for a good prank go to waste, Miocic channeled his excitement into pulling a fast one on his soon to be father-in-law.

“My fiancé and I, we took all the women and sat them on the couch and her father came a little later and I was like, ‘Hey, I need to tell you something.’ He was looking at me and all the women were looking down at the ground and I was like, ‘I’m fighting for the title!’ He thought she was pregnant, so it was a great joke.”

He also got to share a good laugh with his close friend, UFC light heavyweight Gian Villante, who jumped on a plane to help Miocic prepare, only to arrive to the news that the fight had been scrapped.

According to Miocic, there have been discussions about getting the fight back together, but nothing concrete has surfaced as of yet. He did, however, share his thoughts on the current champion and how their eventual encounter would go down if it takes place.

“I’m going to get that belt, so he can hop on the fire truck while I’m holding it at the parade,” he added, reiterating an offer the firefighter and EMT made to allow Werdum to join him in Cleveland during his victory parade and holding firm to his pledge to bring a championship back to the shores of Lake Erie.

“We need it, the city needs it. We’re so close all the time and I’m going to take care of it,” he said. “I will win the championship.”