"What made me sad was that I think that I can fight better than that day
when I’m a hundred percent. So that’s what I’m hoping to do." - "Minotauro" Nogueira 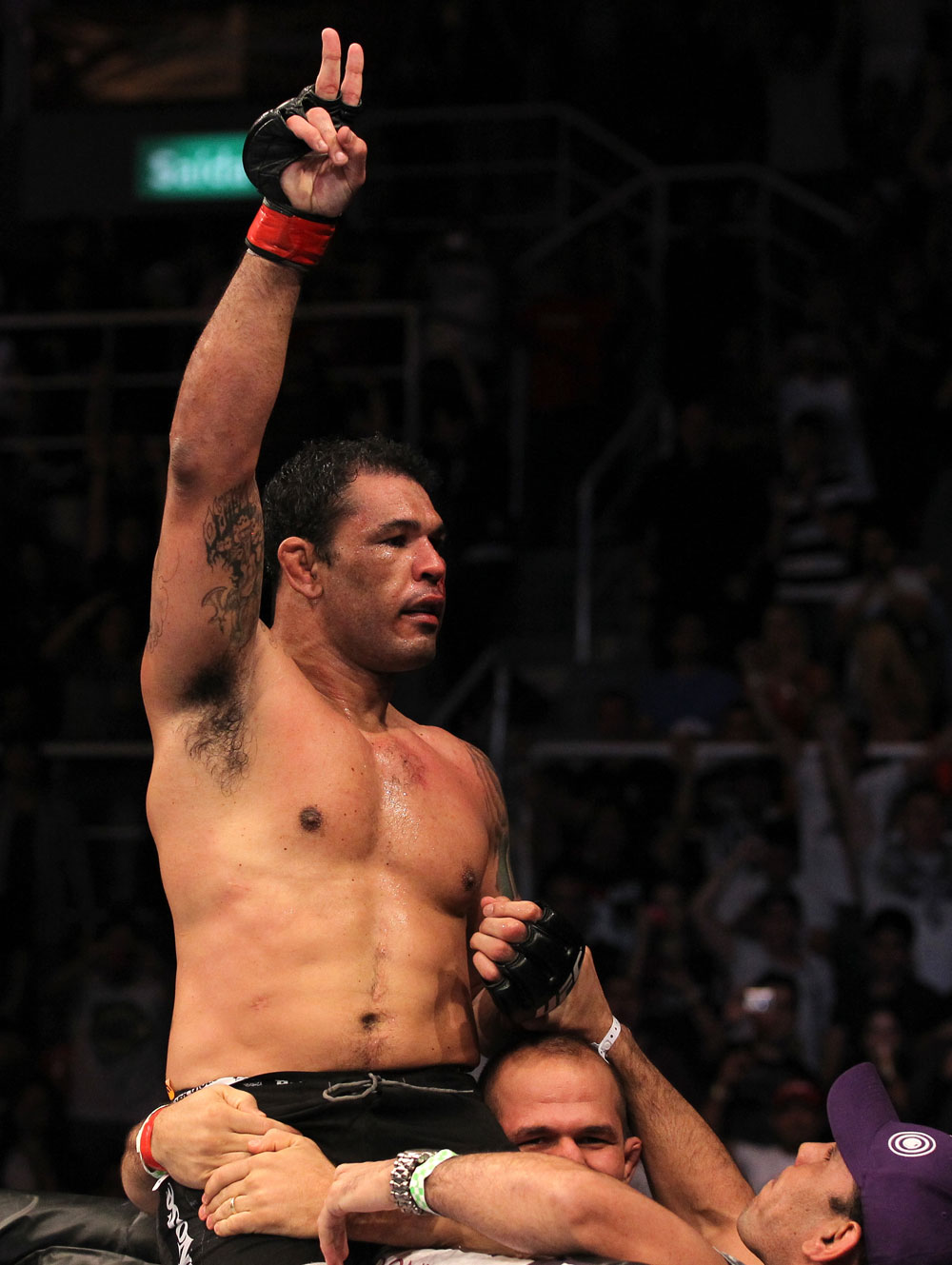 Come on. You had to know that someone who survived getting run over by a truck at the age of 10 wasn’t going to leave the sport of mixed martial arts quietly. In fact, one of the most enduring qualities attached to former PRIDE and interim UFC heavyweight champion Antonio Rodrigo “Minotauro” Nogueira is his otherworldly level of toughness.

Yet even his staunchest supporters had to wonder what his 35-year old body had left when he stepped into the Octagon in August to face up and coming knockout artist Brendan Schaub. Nogueira was coming off a layoff of over a year due to knee and hip surgeries, he had lost two of his previous three bouts, both by knockout, and in any combat sport, Father Time’s knock on the door can come at anytime once you hit your mid-30’s.

But this was a rested Nogueira feeling better than he had in years, he was fighting in front of his home fans in Brazil for the first time ever, and that was really all the motivation he needed to turn back the clock, which he did by knocking Schaub out in the first round.

“Fighting in Brazil was amazing to me,” said Nogueira. “It was the best experience of my career to fight in front of my people, my family, my closest friends. The arena is less than two miles from my gym, so I had a lot of support, energy, and motivation. Fighting is about motivation, and when you have a special case like this, you do your best and you can surprise people with how good you can do, and that’s what happened in this fight.”

Nogueira has been around this sport long enough – over 12 years to be exact – to know what the whispers were heading into the Schaub fight. To many, he was done. But he knew better, and even though he admits that he wasn’t fully operational after his last surgery in February, even the level he was at was so much better than he had been over the last few years.

“I was injured for about three years, and I couldn’t perform so well in the last fights,” he said. “After my last surgery, I took the fight (with Schaub), even though I was like 70 percent. But it was enough for me to be way better than I was before. I was faster, I was punching faster, I had my hips to throw my right hand better because the power comes from the hips, and it was great to fight in better shape and in better condition. I’m feeling good right now.”

So there’s no better time than now to revisit a loss that still eats at him, his UFC 92 defeat to Frank Mir in December of 2008. Hit with a staph infection during training camp, Nogueira recovered, but was also saddled with his other injuries, and it was the worst timing in the world for him, as Mir was on top of his game that night in Vegas. What resulted was Nogueira’s first knockout defeat. Three years later, this Saturday night in Toronto, Nogueira gets his rematch.

“He (Mir) won that day, I can’t change the story,” said Nogueira of their first bout. “That day he fought better. He was faster, he was more athletic than me, and it worked for his game. What made me sad was that I think that I can fight better than that day when I’m a hundred percent. So that’s what I’m hoping to do. A fight is a fight, but I think I can do better than the last fight.”

We’ve already documented how different Nogueira will be this time around, but Mir has not sat idly by in the last three years either. His standup and wrestling have improved, and he’s constantly tweaking the areas of his game that he thinks need adjusting. This subtle transformation hasn’t gone unnoticed by Nogueira.

“I think he’s improved his standup and his Muay Thai’s gotten better,” he said of Mir. “He’s a complete fighter, and he’s improved his endurance. I know I’m gonna face a good opponent, but I’m ready for everything.”

A win would make it two in a row for Nogueira and end the year on a high note. But as far as title aspirations go, he doesn’t have any at the moment considering one of his protégés, Junior dos Santos, is the man holding the UFC heavyweight crown.

“Right now I’m not thinking about that because of Junior,” said Nogueira. “I don’t have that goal right now to fight for the title because he’s got the title. I want to be the best I can in my weight division, but it (getting the belt) is not my goal right now.”

That’s an admirable position to take, and when you hear him talk about dos Santos’ title winning effort against Cain Velasquez last month, it’s not as if Nogueira is a mentor or training partner, but more like a brother.

“I feel happy,” said Nogueira. “He was a poor kid in Brazil and I feel great for him and how he improved. He took this very seriously and he became the heavyweight champion of the world.”

That’s a title Nogueira wore with pride for a good portion of his career. Hopefully as mixed martial arts grows bigger and more mainstream, newer fans will recognize that fact and recognize him as one of the game’s greats. But for the moment, “Minotauro” is happy to be around to see the sport he helped build finally be accepted.

“I see how great this sport became and I see how popular this sport became in Brazil,” he said. “Over 60 million people watched Junior’s last fight. It was so different back when it was illegal in a couple states in the United States, and now we have FOX TV. So this sport’s great, I love what I do, and I see how the sport improves every time. There are fighters coming up like Junior, Jon Jones, Lyoto Machida, and a lot of new guys, and I’m happy to be between them.”