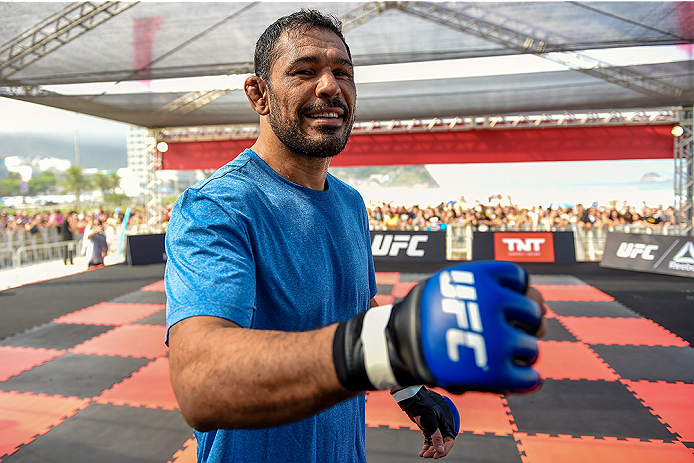 “When you’re an MMA fighter, it’s not easy.”

No one knows this more than the man speaking those words, Antonio Rodrigo “Minotauro” Nogueira. A former PRIDE and UFC heavyweight champion, and a true legend of the sport of mixed martial arts, Nogueira knows what it takes to the best, and he knows the toll that quest takes on a 39-year-old’s body. Yet he doesn’t see himself as any different from other athletes in other sports.

He laughs, ready to rev up that machine again this Saturday against Stefan Struve on the main card of UFC 190 in Rio de Janeiro, Brazil. He knows not many are still doing this as they close in on the big 4-0, but he’s proud that he’s one of them, and finally, after years of nagging injuries, surgeries, and aches and pains, he’s feeling good and ready to get back after it.

“After 16 years of my career, I’ve seen a lot of guys start after me and they stopped already,” he said. “But I kept going. Mentally, I have to be very strong, and physically, too. If I’m not a hundred percent physically, I don’t go to the fight. I have to be in good shape.”

And by all accounts, he is in tip-top shape for his first fight since an April 2014 loss to Roy Nelson. That defeat was his third in his last four outings dating back to 2011, but he looks at Saturday’s bout as a fresh start and one he wasn’t about to miss since it’s in his backyard.

“I’m feeling good, I’m fighting in Brazil, and I like to fight here,” Nogueira said. “This is my hometown, the arena’s kind of close to my house, less than 3 kilometers, and I wanted to fight at home, and feel the vibe and energy.”

Of course, despite his iconic status at home and his already set-in-concrete legacy, there is a fight to be fought at HSBC Arena, and nothing is ever easy for Minotauro, who will be facing a nightmare stylistic matchup in the 6-foot-11 ½ Struve. Luckily, Nogueira has been down this road before, having vanquished the equally tall Semmy Schilt back in their 2002 PRIDE fight.

“In that same year I fought more than one big guy, so I know about them,” he said. “They had a lot of their strength because of their size, and their hands are big so they’ve got a good grip too. So you’re fighting against his (Struve’s) grip too, and I’m not going to fight his reach, so I have to get close to fight him.”

Nogueira submitted Schilt with a triangle choke in a little over six minutes in their bout, just three months after one of the Bahia native’s greatest triumphs, a second-round submission of Bob Sapp, who clocked in at 6-foot-4, 350 pounds. When Nogueira speaks of how the sport has changed since he turned pro in 1999, he proudly says that “now it’s getting professional and a lot more fair.”

I remind him of fighting someone who had a hundred pounds on him and could have seriously injured him with a piledriver that took place just seconds into the fight. A bout like that couldn’t take place these days with weight classes and unified rules governing the sport, but that doesn’t mean he’ll ever forget meeting Bob Sapp in the ring.

“Man, I have a pain in my neck sometimes,” Nogueira laughs. “I’ll wake up and my neck is very stiff. That’s from that day.”

It’s almost hard to believe that the Sapp bout took place nearly 13 years ago, and that Nogueira is still here and still fighting the best in the sport, but he still has that love for the sport and hunger to compete.

“I have a lot of guys up and coming in the gym,” he said. “I’m not by myself. We have about 70 guys under Team Nogueira, and to keep training with them motivates me to keep going. Plus, I have a big passion for the sport. I like to watch the UFC, the new fighters coming up, and the fighters from the old generation like Dan Henderson, that also motivates me to keep going on.”

So what could ever replace that feeling of competing in a packed arena while fans scream for you? Nothing.

“When I stop fighting, I want to be involved in the sport as a trainer and a commentator, but that feeling when you’ve been inside the Octagon, whether winning or losing, that will be a big challenge to get over,” he said. “I do kite surfing for sport too, and that’s a good adrenalin rush, but it doesn’t even compare. Fighting is a totally different challenge and I love to be inside the Octagon.”