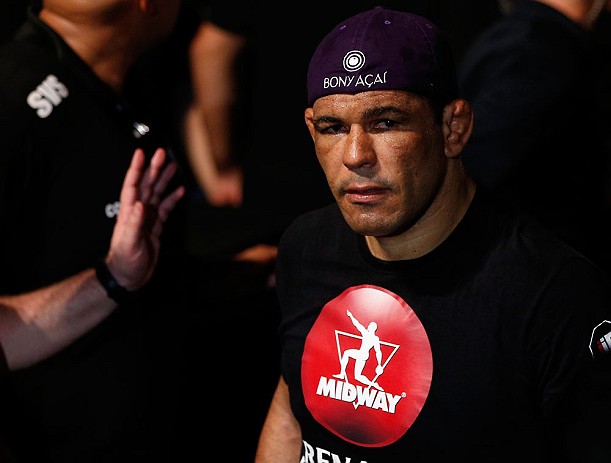 The official record will say that Antonio Rodrigo “Minotauro” Nogueira retired from mixed martial arts competition on Tuesday, September 1, at the age of 39, a month after his UFC 190 bout against Stefan Struve.

On my own unofficial record, I don’t count that last defeat, or the six bouts that came before it. Sure, there were stirring wins over Brendan Schaub and Dave Herman over the stretch from 2010 to 2015, but there were also losses that hurt the heart of anyone who considers themselves a fan of the former PRIDE and UFC heavyweight champion.

‘Big Nog’ says goodbye to the Octagon: A look back at his greatest fights | Minotauro to stay involved with UFC | Nogueira ready to mentor future of sport

So I cut the iconic career of Nogueira off at August 29, 2009. That was the night he took a trip to Portland, Oregon and faced off with UFC Hall of Famer Randy Couture in the main event of UFC 102. It was considered by many to be a dream fight that came too late, as neither fighter was in his prime anymore, but they fought like legends for 15 minutes. That night, I wrote of the fight as mixed martial arts’ version of the classic Thrilla in Manila between Muhammad Ali and Joe Frazier, and I stand by that today.

It wasn’t the brutal, punishing war that changed the lives and careers of Ali and Frazier, but it was a prime example of the combat sports adage that the great ones always have one great fight left. And Nogueira was certainly one of the great ones. Those final fights post-Couture showed glimpses of that greatness, but unfortunately by the time he hung up the gloves to join UFC Brazil as an Athlete Relations Ambassador, his body - particularly his knee, hips, and elbow - had betrayed him too many times for him to make another run at the title.

That’s the way things go in professional sports. Years of work in the gym and on the field, court, rink, ring or Octagon eventually lead an athlete to having more surgeries than fights or games. As he told me before the Struve fight, “When you’re an MMA fighter, it’s not easy.”

Then again, if it was easy, anyone could do it, and not too many people could do what Nogueira did in the ring and Octagon, especially when the lights were at their brightest.

That shouldn't be surprising, because while Nogueira competed professionally since June of 1999, his fighting began 13 years earlier, when he nearly lost his life in a horrific accident in his home city of Bahia.

“I remember everything,” Nogueira told me in 2007.  “It was the hardest time I had in my whole life.”

Just 10 years old, Nogueira, his twin brother Rogerio, and a group of other children played at a neighborhood party. Suddenly, a truck parked on the street backed up, running Rodrigo over.

He nearly did, falling into a coma for four days and forced to stay in the hospital for 11 months as he healed from broken legs and serious internal injuries.  A broken rib had perforated his liver, forcing removal of part of the organ and of one of his ribs.  His diaphragm was injured as well, forcing him to breathe from machines. Even after his release, he needed two more months to begin walking again, and the idea of him becoming one of the greatest fighters to ever strap the gloves on was something akin to his family hitting the lottery.

But he did become one of the greats in a world where that word is tossed around too lightly. And while he was a high-level Brazilian Jiu-Jitsu black belt and a striker able to hold his own with the best in the world while delivering his own share of knockouts, it was his resilience and toughness that endeared him to a generation of fans.

For most of us, this toughness most notably showed up on fight night when he faced Bob Sapp on August 28, 2002. Outweighed by at least a hundred pounds, Nogueira – then the PRIDE heavyweight champion – got frighteningly dropped on his head by a Sapp piledriver. When I asked Nogueira about this recently, he laughed, saying “Man, I have a pain in my neck sometimes. I’ll wake up and my neck is very stiff. That’s from that day.”

Nogueira, like a horror movie character, seemingly rose from the dead to defeat Sapp. The craziest part of the whole scenario is that the Brazilian admitted that he was just waiting for “The Beast” to get tired as he got ragdolled around the ring.

“I was thinking, ‘He’s gonna get tired, he’s gonna get tired,’” Nogueira said.  “Every time he did that I felt good because I know he spent a lot of strength to do those moves.”
Five fights later, it happened again, this time against feared striker Mirko Cro Cop, and it may have been even worse for Nogueira in that ten-minute first round, as he took blow after blow from the Croatian, oohs and aahs punctuating every flush kick or punch. You could even see UFC President Dana White, at ringside with Zuffa co-owner Lorenzo Fertitta and Couture, wincing at one particularly hard shot. Nogueira wouldn’t back down though, even after being dropped by Cro Cop just before the bell ending round one.

“Most of the fighters think that everything is physical,” Nogueira said.  “I think the mental part is everything.  You’ve got to keep it right.  Sometimes a fighter’s stronger than me or has better skills, but it’s hard to find a fighter who’s stronger mentally than me.  I know that.”

In round two, he needed less than two minutes to floor Cro Cop and submit him with an armbar. A little over four years later, he would finish Tim Sylvia in similar fashion to win the interim UFC heavyweight title and carve his name in the record books as the only fighter in MMA history to hold both the PRIDE and UFC heavyweight championship. His response to his come-from-behind third round win over Sylvia?

“I played his game for almost three rounds. He played my game for two minutes and I won the fight.”

If a truck couldn’t stop Nogueira, a fellow fighter with two arms and two legs was going to have a rough time at it. And while there were losses dotting his 34-10-1, 1 NC record, the wins over the likes of Cro Cop, Sapp, Sylvia, Couture, Josh Barnett, Heath Herring, Fabricio Werdum, Ricco Rodriguez, Dan Henderson, Jeremy Horn, Mark Coleman and Gary Goodridge more than made up for those defeats.

Even more notable was that Nogueira became royalty at home in Brazil, a man of the people who rose from rough beginnings to the pinnacle of his profession. He is treated unlike any other fighter in the nation, and it’s why his new role is pivotal for the continued rise of the sport he helped build. But no matter how many fighters he coaches or discovers, mention “Minotauro” to the average Joe on the street, and it will always go back to the fights. I asked Nogueira a couple years ago what fight he would put in his own personal time capsule. He went back to 2002.

“I think it would have to be the fight against Bob Sapp,” he said. “He was a giant coming in without any fear, and he had all that power and size over me, but I was able to withstand it. I was able to get through the beginning of the fight, which was complicated, and then I was able to turn the fight and win. It was unforgettable.”

So was the fighting career of Minotauro Nogueira.