Minotauro Nogueira and the Art of Never Giving Up

"It’s what I love doing. I like going in to the
gym and training every day and having the mindset of expecting a fight.
It’s the adrenaline that keeps me going." - Minotauro Nogueira 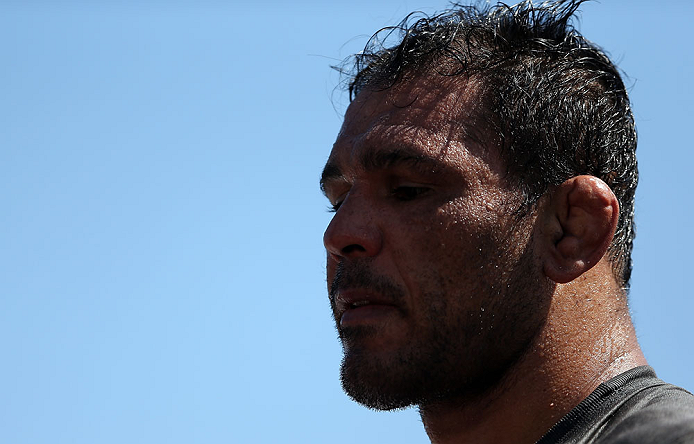 Anyone who saw Antonio Rodrigo Nogueira getting slammed into the canvas headfirst by Bob Sapp in their PRIDE Shockwave bout back in 2002 won’t forget that vision anytime soon, especially knowing that “Minotauro” shook off the slams and submitted his foe in the second round.

Or what about the beating he took at the hands of a prime Mirko Cro Cop in the first round of their 2003 PRIDE fight, another match where he came back to win by submission in the second frame?

So when you ask Nogueira today why he didn’t tap out against Frank Mir at UFC 140 last December when his arm was about to be broken, the answer isn’t surprising. He thought he was going to come back and win.

“It was a fast scramble on the ground, we rolled a couple of times and I felt like I would get out of the submission and I knew I would keep trying my best to get out of it,” said Nogueira, who wound up losing the bout via technical submission when the arm was indeed broken.

It was only Nogueira’s seventh loss in 42 pro fights (two each coming against Mir and former PRIDE champ Fedor Emelianenko), but in terms of injuries, the former PRIDE and interim UFC heavyweight champ was now forced to the sidelines again, just the latest in a series of physical setbacks that have included knee surgeries and hip ailments. He wasn’t prepared to hang up the gloves though.

“It’s what I love doing,” said the 36-year-old. “I like going in to the gym and training every day and having the mindset of expecting a fight. It’s the adrenaline that keeps me going.”

And as the days of healing turned into days of arduous rehab, Nogueira’s eventual prize of walking into the Octagon once more as a healthy man kept him going through the rough times.

“Thinking of my return is what always motivates me,” he said. “It’s what keeps me going when I was going through physical therapy, that dream of being able to train hard every day and looking forward to a fight.”

Expected to return at UFC 149 in July against Cheick Kongo, Nogueira pulled out of the bout in order to get his arm stronger, and as it got back into fighting shape, it turned out that this Saturday’s UFC 153 card in Rio de Janeiro was going to be in jeopardy after losing a main event between Jose Aldo and Frankie Edgar, and the co-main event of Rampage Jackson against Glover Teixeira in the same 24-hour period. The first man to step up to save the day was middleweight champ Anderson Silva. The second? Nogueira, who jumped at the chance to fight in Rio for only the second time in his career and the first since his UFC 134 knockout of Brendan Schaub, one of the greatest nights of his life.

“I wanted the chance to fight in Rio again,” he said. “When I fought Schaub last year, it was my first time fighting in Brazil, and the crowd was unbelievable. It’s great to fight at home, and the stadium is only about one mile from my gym.”

Convenience aside, Nogueira’s bout against Dave Herman gives him a chance to regain the momentum he had after the Schaub bout and show his loyal home country fans that there’s still plenty of gas left in his fighting tank.

“He is a dangerous striker and I think he will want to keep the fight standing,” said Nogueira of Herman. “But the fans in Brazil are very loud and they motivate you a lot from when you walk out and throughout the fight. It’s an amazing energy.”

And at this point in the career of a fighter who has done it all and who has already established himself as one of the legends of mixed martial arts, it’s that roar of the crowd that can never be replaced or replicated.

“I want to keep fighting,” said Nogueira. “This is what I do. I like the rush. This will be my 43rd fight and I will do my best so that I can continue to be healthy to keep training and keep fighting.”

While he can, expect him to keep doing it, but eventually, the shorts will be hung up and the gloves put away, and Nogueira will have to be content with leading a new generation of Brazilian battlers up the ranks. When that day comes, how will he want to be remembered?

“I hope they remember a guy who could overcome struggles and always come back without ever giving up.”