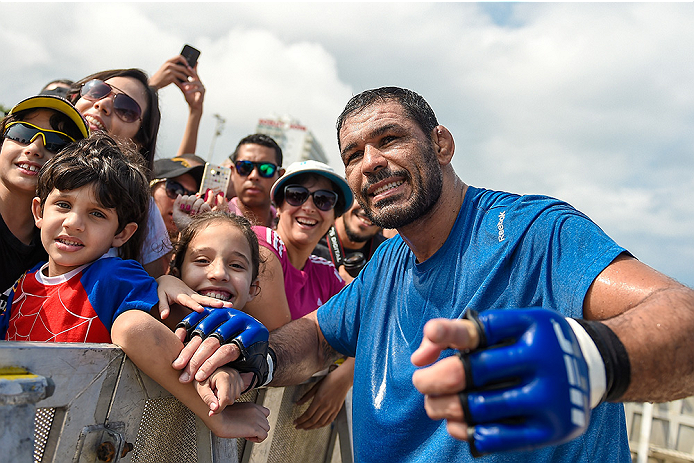 Sao Paulo – Mixed martial arts (MMA) legend Antonio Rodrigo Nogueira, known by fans worldwide as “Minotauro,” officially announced his retirement from UFC® competition today.  While his fighting days may have come to a close, his work in the MMA community is only beginning as he will serve as an Athlete Relations Ambassador for UFC® Brazil.

As part of his new contract, Nogueira will provide services for a number of initiatives in the Brazil region.  He will serve as a liaison for the organization between athletes, sponsors, media and government bodies, as well as act as a mentor in the development of young athletes.  Additionally, Nogueira will assist in identifying rising talent throughout Brazil as UFC® continues to seek the best athletes for its roster.

"'Big Nog' is a legend in the sport of MMA," UFC President Dana White said. "He is respected by fighters and fans worldwide. It has been an honor to watch him compete and I'm happy to see him retire. He will be a huge asset to the UFC, the athletes and the sport as an ambassador. I look forward to working with him in this new chapter of his life."

Nogueira added: “It’s a great pleasure and an honor for me to further my ties with the UFC. I’ve always had a passion to follow the development of new athletes and that’s what I intend to continue doing. I want to help further the spread of MMA around the world and give my contribution to the emergence and development of young talent. I appreciate all the confidence that Dana White, Lorenzo Fertitta and Frank Fertitta have in me, and I believe we will reach big results together. I know that I can, and will, contribute much to the growth of our sport outside of the Octagon.”

Prior to his retirement, Nogueira boasted one of the most successful careers in MMA history.  With his first professional fight in 1999, Nogueira rose to prominence in Japan with PRIDE Fighting Championship, eventually becoming a two time champion in the organization, including winning their first ever heavyweight belt in 2001.  Upon PRIDE being purchased by an affiliate of Zuffa, LLC in 2007, Nogueira continued his dominance by defeating Tim Sylvia for the interim UFC® heavyweight title.  Big Nog also had a number of other memorable fights, including his homecoming to Rio de Janeiro in 2011, when he defeated Brendan Schaub at UFC® 134 in front of raucous crowd that few will forget.  Nogueira finishes his career with a sterling impressive 34-10-1 record and a reputation as one of the greatest Brazilian jiu-jitsu artists ever in the heavyweight division, as evidenced by his 22 submission victories.

Nogueira is a pillar to the community in Rio de Janeiro boasting an Institute co-owned by his twin brother, current UFC® fighter Antonio Rogério “Minotouro” Nogueira. The “Nogueira Brothers Institute” was created in 2008 and has six operating centers that train underprivileged children in Brazil, using MMA as a social inclusion tool. Since its inception, the project has contributed to social development by changing the lives of many young people from communities throughout Rio de Janeiro, building exemplary citizenship and overcoming barriers.

Rodrigo and Rogerio are also known for their entrepreneurial profiles. The twins own a chain of franchised Team Nogueira gyms, with 33 locations, including a gym in Dubai. In three years, Team Nogueira franchises have reached over 10,000 students.