"He told me he’s coming back stronger, and that’s what I see." - Minotauro Nogueira 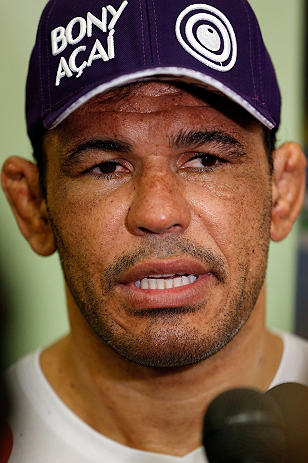 LAS VEGAS, December 26 – It takes a legend to know a legend. So when Anderson Silva lost his UFC middleweight title to Chris Weidman in July, the first time he tasted defeat in 17 UFC fights, it’s no surprise that the man who knew best what the Brazilian icon was going through was one of his mentors and friends, Antonio Rodrigo “Minotauro” Nogueira.

“When you’re undefeated, everybody feels like you’re perfect, like you’re not human,” said Nogueira Thursday after the final press conference for the UFC 168 card headlined by the rematch between Silva and Weidman. “He had a bad day that day and he knows that.”

For the longest time, Silva didn’t have bad days, having remained unbeaten for over seven years, with even that last pre-Weidman loss coming via disqualification against Yushin Okami in 2006. And while Nogueira never had an undefeated streak that long, his 13-0 run from 2000 to 2003 established him as the best heavyweight in the game. In fact, take the name of another heavyweight star, Fedor Emelianenko (who beat him twice), off his record, and Nogueira went 22-0 with 1 NC from 2000 to 2006, making it no shocker that Minotauro can relate to Silva’s dilemma before the first fight against Weidman.

“When you’ve got a belt and you fight for it as many times as he did, he had a lot of pressure on him,” said Nogueira. “He defended the belt more than ten times, and to almost always fight outside of his hometown and home country, it’s a lot.”

Nogueira makes it a point to not throw water on Weidman’s victory though, calling him a “strong and really good fighter.”

That’s not to say Weidman’s second round knockout win wasn’t shocking, though as the former PRIDE and UFC heavyweight champion points out, at this level, you’ve got to be prepared for anything.

“I was surprised, but he was fighting a guy who’s at a good level too, so the only thing you know is that someone is going to win,” he said. “You’ve got to be prepared to lose when you’re an athlete at a high level. But I was surprised of course. He (Weidman) kept going, he was hungry, he was strong in his mind, and he surprised everyone, but it’s good to see how Anderson reacted after that, and it made him hungry. It makes a new story for the sport.”

That story is one of redemption, of regaining the spark that made him an all-time great, and turning back the clock at 38 years old. Can he do it? Nogueira likes what he’s seen since the last fight.

“He’s fighting for the belt, so he’s hungry,” said the Brazilian star. “He spent a lot of time with his family, and he had a really good camp. He told me he feels like he has no pressure now. That’s why he’s relaxed. He told me he’s coming back stronger, and that’s what I see. He was motivated, he called everybody to train and he would get mad when people would come late. (Laughs) That shows he’s motivated.”