"When you’re fighting a guy like Machida...you just have to stay within
yourself, within your range of what you do, and be extremely good at
it." - Phil Davis 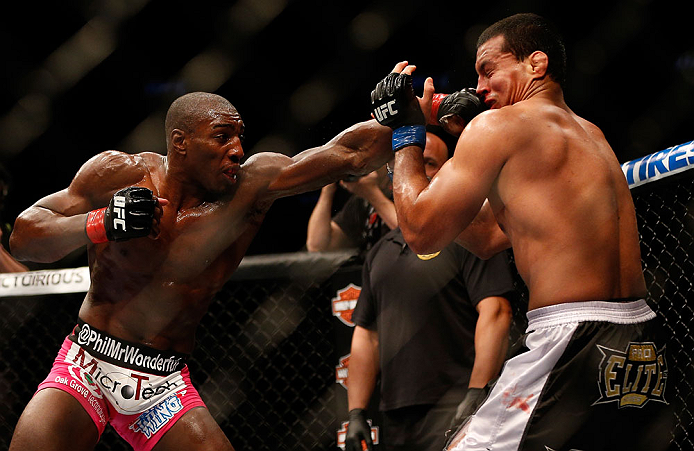 One day sitting in a psychology of sport class at Penn State University, Phil Davis was studying a parabola explaining one’s maximum arousal for competition. Davis the student earned a Bachelor of Science degree in Kinesiology, the study of the principles of mechanics and anatomy in relation to human movement. The theory of Davis the athlete is one he put into practice as a four-time All-American wrestler and individual national champion. He knew what he was trying to get himself to do, to get jacked up but not overly excited for competition.

“It’s happened to me so many times,” Davis said. “Sometimes I’m over-aroused and I completely die in competition. It doesn’t mean I lose; a lot of times I can still win just because I was good, but I knew that I was over-aroused for a competition.”

Gaining a full understanding of what he’s trying to accomplish helped Davis take his game to the next level. As an MMA fighter, Davis is continuing his climb up the stairway of athletic honor. Heading into UFC 163 this Saturday in Rio de Janeiro, Davis (11-1, 1 NC) is poised to deal with the unique and perplexing Karate style of Lyoto Machida. The battle with the former UFC light heavyweight champion is the biggest test of Davis’ athletic career. A win over “The Dragon” would be his third straight and perhaps put him on the precipice of a title shot.

“Mr. Wonderful” has knocked on the door before, one that Rashad Evans slammed in his face with a unanimous decision victory at UFC on FOX 2 that handed him the first and only loss of his professional career. Davis rebounded to win two straight following an accidental eye poke that forced a no contest against Wagner Prado, each bout unveiling something new to his game while pushing physical and mental stimulation to its limits without overheating. Currently ranked eighth in the UFC’s light heavyweight rankings, Davis could possibly rocket straight to the top tier and meet the winner of champion Jon Jones vs. Alexander Gustafsson.

Think about it. Davis defeated Gustafsson, his current Alliance MMA teammate, via first-round submission in 2010. Machida and Evans each fought Jones -- and lost. Ryan Bader, scheduled to face another top contender in Glover Teixeira, fell victim to the current champion. And while heavyweight Daniel Cormier has demanded a shot at 205 on the condition he defeats Roy Nelson at UFC 166, Davis will play his hand provided he slays the Dragon Saturday night.

“As long as I put on a great performance and the fans love me, yeah, I’m going to push for that,” Davis said. “Why not? I’m ready for a big fight. I’m in a good spot in my career. I’m ready to take on big fight after big fight.”

Victory over Machida comes with clout, for if Davis wins he’ll become the fourth in a line of elite fighters who have taken the Dragon down (Mauricio Rua, Quinton Jackson, Jones). Machida is a complex puzzle. While some of his fights have been stale, in others he’s perplexed opponents by keeping his distance before striking like an assassin (ask Evans, Bader, Randy Couture and Thiago Silva).

If Machida sits back, Davis plans on sitting back, leaving open the question of who will make a move first. That’s where Davis’ kinesiology education applies to MMA. Rather than patiently wait for their opening, doing certain things to create openings for other things, some think too much about having to make something happen. It’s a game that Machida loves to play.

“When you’re fighting a guy like Machida, you have to be completely within yourself. You can’t try to invent some super-cool move that will work. He’s seen it all. He’s fought his style for much more time than I’ve been training to fight him, so you just have to stay within yourself, within your range of what you do, and be extremely good at it.”

The stakes in UFC 163’s co-main event will be high, so Davis will have to be real good. But when the heat is turned up, he contends Machida will be the one feeling the pressure. Taken apart by Jones at UFC 140 in 2011, Machida has won his last two bouts and is close to a potential shot at redemption. A native of Salvador, Brazil, Machida will have an entire nation in his corner that’s expected to spew vitriol towards the American invader.

“I don’t need to stress over how to beat the Dragon,” Davis said. “You know what? I’m good. I’m not worried about whether I have skills or not. I want to beat him because that’s what I’ve set out to do. When you’re willing to sacrifice everything to win, you will figure out a way to win on the spot. My mind is set on winning and I will not settle for anything less.”

Davis doesn’t settle, period. Proof that the flow of his MMA game has improved came during a three-round unanimous decision win over Vinny Magalhaes at UFC 159 in April. A champion wrestler, Davis put on a striking clinic that night in Newark, working Magalhaes like a heavy bag and leaving the Ultimate Fighter Season 8 finalist at a loss for answers.

“I work on my MMA game,” Davis said. “If I could beat a guy like Vinny without even using my biggest weapons, without using my wrestling at all, or my jiu-jitsu ... barring injury, you will continue to see a new Phil Davis every time I step into the Octagon.

Time -- along with fate -- proved Davis correct as a middle school student, a time when wrestling was the furthest thing from his mind. One day a childhood friend named James Little convinced Davis to stay after school so Little could try out for the wrestling team. Davis was watching and loitering when the coach demanded that he show him something on the mats.

The coach replied, “No you’re not” and Davis ended up practicing in his street clothes. He told his mother about the experience. She encouraged him to try it for the rest of the week and could give it up if he still didn’t like it.

“I seriously wanted to quit,” Davis said. “And I meant to quit, but for whatever reason I ended up going to practice that following Monday and the rest is history. I stuck with it by accident.”

That accident led to a 112-17 record (33-3 in his junior and senior seasons) at Harrisburg High School, where he was a four-year team captain and letterman. Attending Penn State afforded him the opportunity to remain close to home and compete for a nationally-recognized program. It also led to a moment where Davis was forced to dig deeper than he ever had in his whole life, an excavation that sowed the seeds to championship glory.

During Davis’ freshman year at Penn State, lead assistant coach “Dangerous” Dave Hart made it a habit since the first practice to do a timed mile-and-a-half and finish under 10 minutes. Davis finished in under 10 -- “Pretty good for a big guy,” he recalled -- but Hart told him to run it again. Like the day he loitered in high school, it took something Davis -- never a state champion despite his impressive credentials -- didn’t want to do to realize he had something inside.

Davis enjoyed a dominant junior season before fading with a second-round loss in the Big East tournament and finishing fifth in the 2007 NCAA championships, but an “unstoppable” championship season the following year ended with a domination of Central Michigan's Wynn Michalak to claim the national crown at 197 and spur Penn State to a third-place finish in the team race. Yet his defining moment actually came during the season opener against Maryland.

A senior All-American and the top-ranked wrestler in the nation, Davis defeated No. 3-ranked Hudson Taylor with a technical fall in the second period that led the Nittany Lions to a 34-3 win. (A year later, Taylor completed a Hall of Fame career as Maryland’s all-time winningest wrestler while ranked among the top-five pinners in NCAA wrestling history.) Davis and Taylor shared a mutual friend who watched the match with Taylor’s father. The latter was blown away, telling the friend he never saw his son lose like that in the 17 years he watched him compete.

That was the ascension of Davis’ climb, one that led to collegiate glory, the UFC and a showdown in Rio. Quick to light the room with wit and a smile, Davis is deliberate in his thinking. His mental focus makes him a match for Machida. Time will tell if his physical skills have reached the next stage of evolution, but Phil Davis stressed and worried?

“I gotta tell you, man,” Davis said. “You gotta give me time at this and I will do amazing things.”