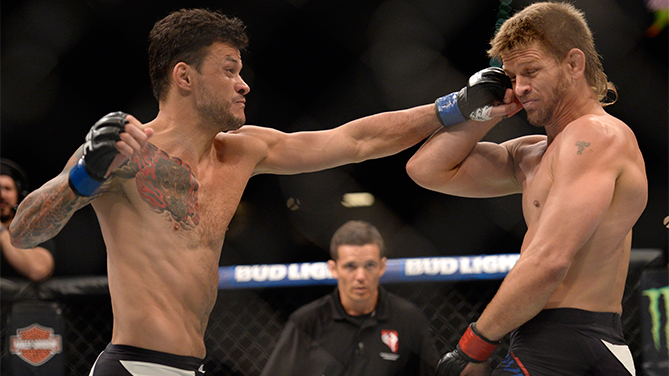 Unbeaten welterweight Alberto Mina finally got the big win he wanted and needed in UFC Fight Night action Thursday at the MGM Grand Garden Arena, knocking out veteran standout Mike Pyle in the second round.

Following a tactical start from both men, Mina hurt and nearly finished Pyle with a little under two minutes left in the round, but the veteran recovered quickly and made it out of the round, rising to his feet before a Mina takedown in the closing seconds that was greeted by a Pyle guillotine choke attempt.

Mina didn’t let Pyle off the hook in the second round though, as he waited for his opportunity to strike, and when it came, he fired off a flying left knee to the head that dropped Pyle hard to the mat. A follow-up flurry ended matters moments later, with referee Jason Herzog halting the bout at the 1:17 mark. 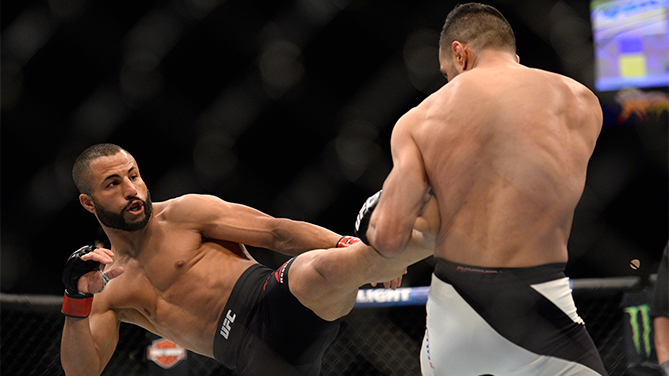 Lightweight strikers John Makdessi and Mehdi Baghdad started slow but finished furiously, exciting the fans in attendance who saw Montreal’s Makdessi win a split decision via scores of 29-28 twice and 28-29.

Baghdad (11-4) and Makdessi (14-5) fought at a measured pace in the opening frame, with France’s “Sultan” holding the edge thanks to a busier and more varied attack. In the second though, Makdessi likely evened the match on the scorecards with a more aggressive posture, and with his pressure not giving Baghdad enough room to operate, it left a lot riding on the third round.

Baghdad made his case early in the final stanza, rocking and dropping Makdessi before the fight moved to the mat, Makdessi on top and Baghdad seeking a submission from the bottom. With a little over three minutes left, the two rose, and both threw and ate bombs, leaving everything in the Octagon in the closing stages of the fight. And as Makdessi drilled and staggered his foe in the final moments, it may have been the clincher for “The Bull.” 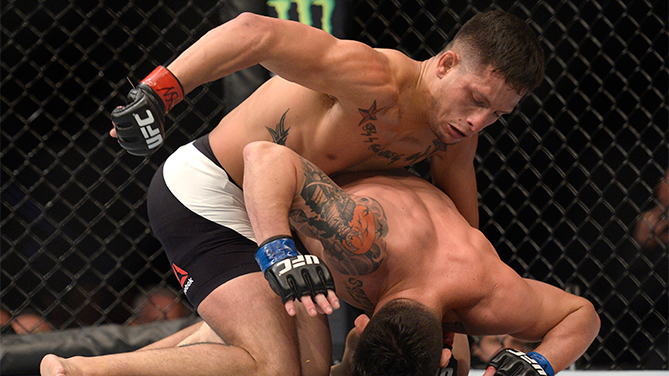 Bantamweights Anthony Birchak and Dileno Lopes engaged in a grueling three-rounder that pushed both men to the limit before Birchak emerged with the split decision win.

Using a smothering grappling attack, Lopes got out to an early lead, though his ability to tag Birchak in standup exchanges didn’t hurt his advantage either. And while Birchak appeared to be the sharper striker, his spotty defense allowed Lopes to keep pace with him and a broken thumb didn’t help matters either.

Birchak did have more success with his standup in the second, and though the grappling exchanges were still in favor of the Brazilian, Birchak was able to keep his distance and avoid the clinches in the final frame, allowing him to pepper his tiring foe more frequently and secure the victory. 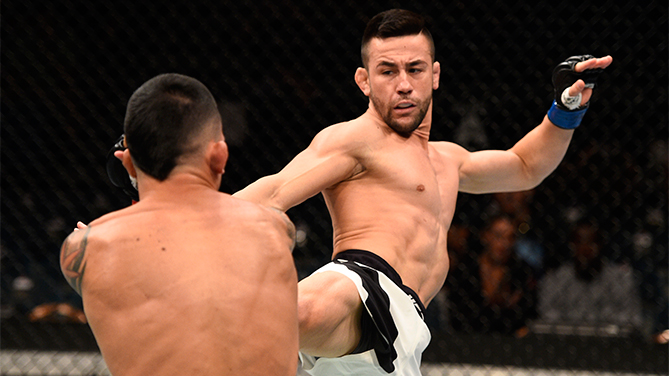 It didn’t last long, but bantamweights Pedro Munhoz and Russell Doane gave the fans a show before Munhoz submitted the Hawaiian in the first round.

For nearly two minutes to open the bout, Doane and Munhoz took turns teeing off on each other with power shots before a bloodied Munhoz took the fight to the mat. There, the Brazilian was in his world, and with a tight guillotine choke, he ended matters, forcing a tap out at 2:08 of the first round. 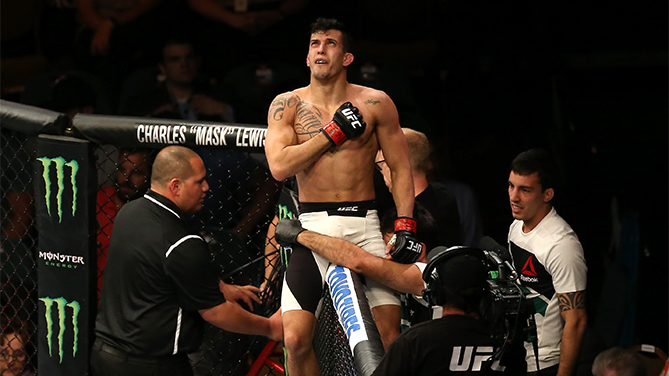 Brazilian bantamweight Felipe Arantes looks like he’s finally getting into a rhythm in the Octagon, as he won two in a row in the UFC for the first time, submitting Jerrod Sanders in the second round.

Arantes (18-7-1, 2 NC) looked to be on his way to a quick win, as he fought off an early takedown from Sanders and fished for a submission. But Sanders recovered well, reversed position on the mat and got into the mount position. With Sanders unable to do anything with the positive top spot, Arantes was able to get out of immediate danger but wasn’t able to get off his back before the horn sounded.

Sanders (15-3, 1 NC) had a much easier time putting Arantes on the deck in round two, but it didn’t matter to the Brazilian, who worked from the bottom position to sink in the armbar that forced Sanders to tap out at the 1:39 mark. 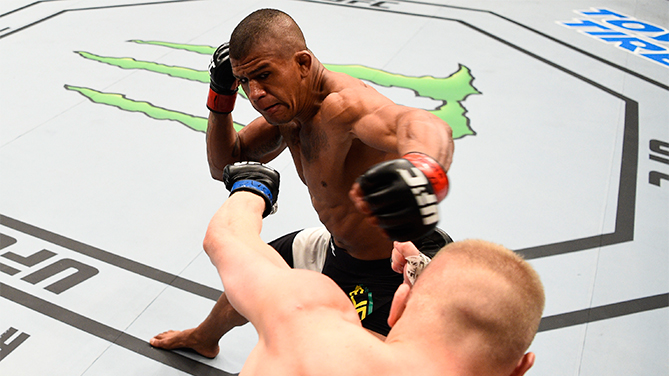 Lightweight prospect Gilbert Burns bounced back from the first loss of his career, getting back into the win column with a first-round submission of Poland’s Lukasz Sajewski.

Sajewski started strong, tagging Burns with some hard strikes to the head and body, but as the round got into its second half, Burns found his range and began opening up with both hands. He staggered Sajewski with a little over two minutes remaining, but was unable to take advantage. The second time he hurt his foe though, “Durinho” put his ground game into gear, and with just three seconds left in the first round, his armbar forced Sajewski to tap out.

Rio de Janeiro’s Burns moves to 11-1 with the victory Sajewski falls to 13-2. 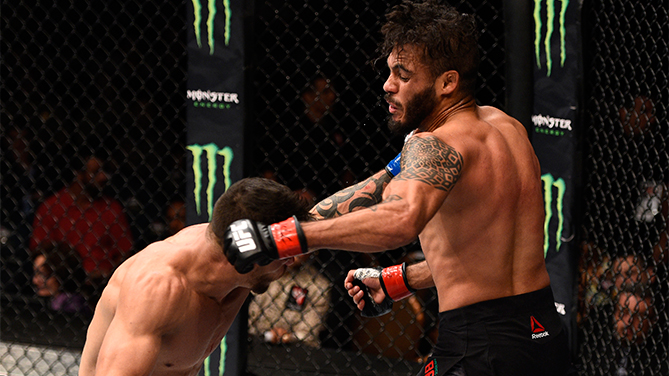 After scoring three takedowns in the early going, it appeared that Vieira was going to coast to victory, but in the second half of the opening round, Beltran began chipping away with hard punches that bloodied the Brazilian on the bridge of the nose and got him back in the fight.

Both fighters began winging haymakers at each other in round two, but Vieira’s ability to mix things up and throw in a takedown after a flurry left him in command in the bout. Beltran was never too far away from catching up though, with an up kick catching and dropping Vieira. From there, the Mexico City product went to work and locked in the rear naked choke that ended matters at 3:04 of round two. 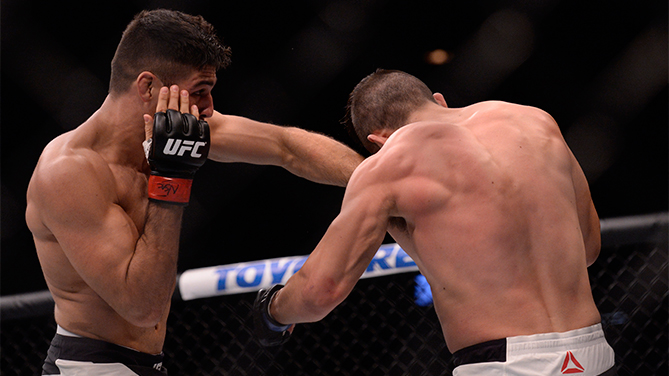 Brazilian welterweight prospect Vicente Luque made it two consecutive finishes in the opener, submitting Alvaro Herrera in the second round in a clash of Ultimate Fighter veterans.

Luque had a strong first round, with his kicks landing at will while the two stood, and his ground-and-pound attack controlling Herrera on the mat.

The Brasilia product went all in on his ground game in round two, with Guadalajara’s Herrera unable to stop his opponent’s takedowns. And after softening Herrera up with more strikes, Luque went for the finish and got it, with a D’Arce choke prompting a tap out at the 3:52 mark.