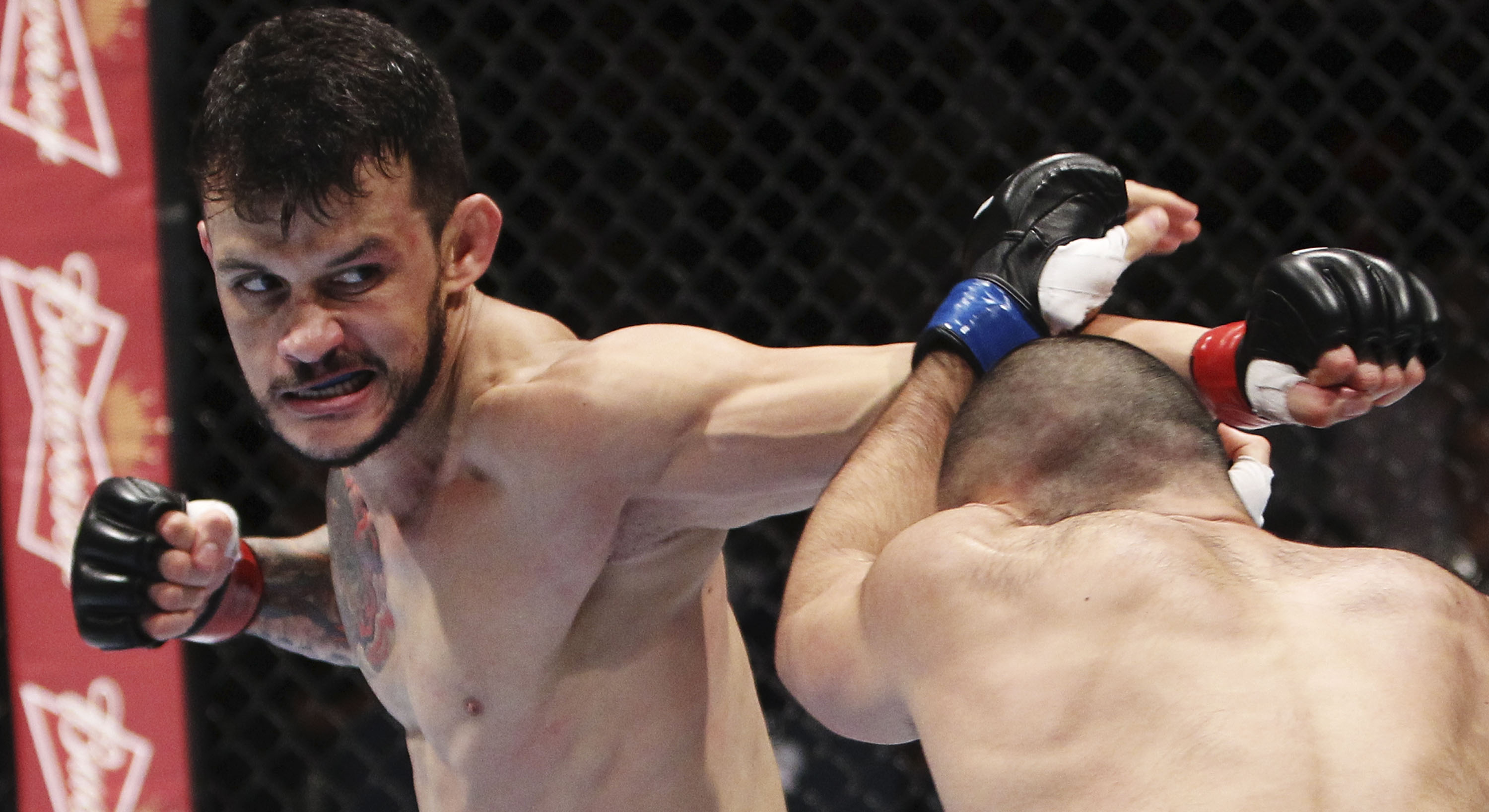 Both fighters engaged immediately and got in their share of shots, Anzai’s heavier hands giving him an early edge. 90 seconds in, two lefts by Mina evened the score, rocking his foe briefly, and that kicked off some entertaining close range exchanged. Midway through the round, Anzai got the fight to the mat, but Mina reversed and took his foe’s back briefly until the two stood. The pace refused to dip as the final two minutes approached, even though it was clear that the energy expended by the two was taking its toll. A right uppercut by Mina with just over a minute left produced a flash knockdown, and seconds later, another one dropped Anzai, this time with a barrage of follow-up shots bringing in referee Thomas Fan to stop the fight at the 4:17 mark. 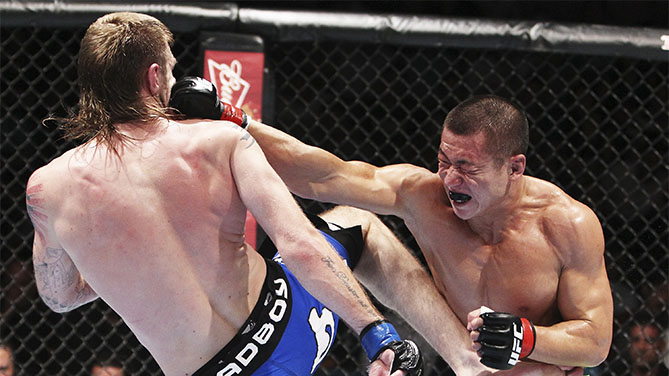 Wang’s defense was solid in the first half of the opening round, as he avoided Mitchell’s takedown attempt. Finally, Mitchell pulled guard to get the fight to the ground, but it was Wang whose strikes were leading the offense, with the Brit unable to get anything going.

Mitchell tried to make something happen in round two with a guillotine choke, but Wang escaped and got back to his own business, with a couple solid exchanges following. Midway through the round, Wang rocked Mitchell with a right hand, which served to prompt the Brit into action with some crisp strikes of his own.

Realizing that getting the bout to the mat was a losing battle, Mitchell settled into his stand-up game in the third round and had success, but Wang responded well to whatever his opponent threw, with quality exchanges thrilling the crowd in the final minute. 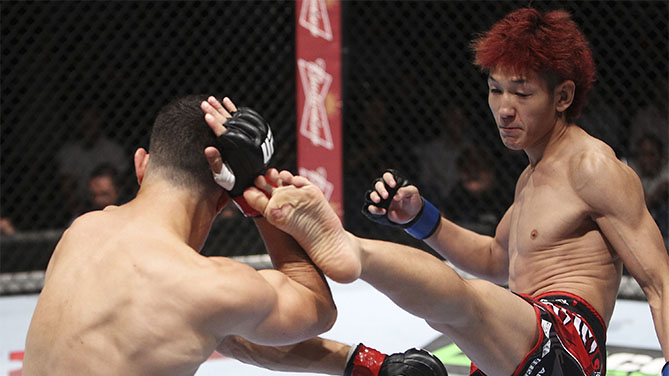 Sasaki flew out of his corner with a flying knee attempt to open the bout, but he missed the Canadian veteran. Soon after though, he took Delorme’s back standing in a scramble, and it was no surprise what came next, as he sunk in his trademark rear naked choke and finished the bout, with the tap coming 1:06 into the bout. 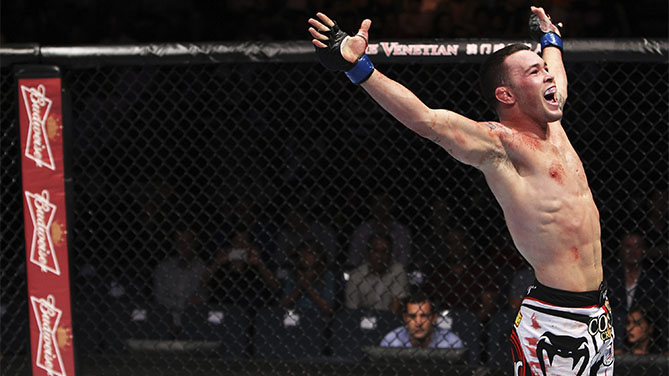 COVINGTON vs. WANG
Welterweight newcomer Colby Covington impressed in his UFC debut, halting China’s Wang Anying in the first round with a ground-and-pound clinic.

A kick to the body followed by a slam opened up the fight in style for Covington, with a firestorm of strikes keeping Wang from getting any offense going. With under two minutes left, Wang found some daylight and escaped to his feet, but the kick followed by a takedown move worked a second time for Covington. This time, a short elbow cut Wang, and after a barrage of unanswered strikes, Wang tapped out, with referee Leon Roberts stopping the bout at the 4:50 mark. 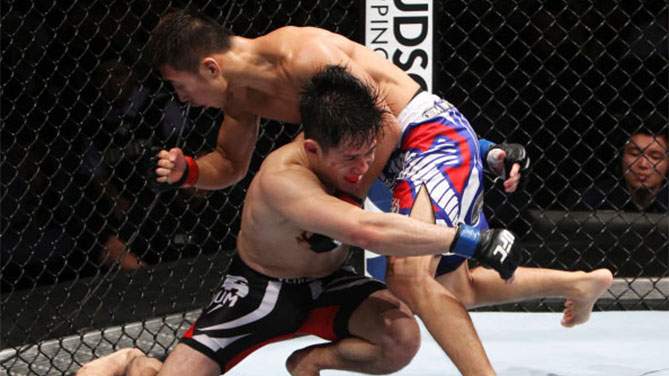 WEE vs. ZHIKUI
The second fight of the night was a controversial one on the scorecards, with Singapore’s Royston Wee taking an unpopular three-round split decision over Beijing newcomer Yao Zhikui in a bantamweight bout.

Zhikui came out bombing, but after some early success, Wee slowed things down and got the bout to the canvas, taking his foe’s back in the process. After some dicey moments, Zhikui was able to turn and reverse position, firing strikes all the way.

An inadvertent low kick by Wee brought a brief halt to the action as round two commenced, and once the fight resumed, it was Zhikui again firing off hard right hands like he did to start the opening frame. After getting tagged several times, Wee sought – and got – the takedown, a wise move since he looked to have sustained a broken nose.

Wee effectively got the fight to the mat early in round three, but he wasn’t able to do much with the position other than keep Zhikui grounded. With two minutes left, Wee took his opponent’s back, but Zhikui escaped into the top spot and delivered a barrage of hard strikes, bloodying his foe. 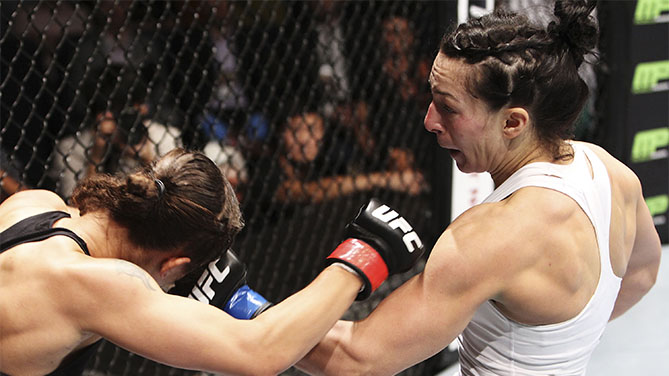 DUDIEVA vs. PHILLIPS
Russia’s Milana Dudieva picked up a victory in her UFC debut, taking a three-round split decision over Elizabeth Phillips in a bantamweight opener that is bound to have many questioning the final verdict.

The fight started as a chess match, Phillips sticking and moving and Dudieva walking forward, intent on landing her bout-altering right hand. With 90 seconds left in the first, Dudieva changed it up, getting the fight to the mat, but it was Phillips who wound up in the top position for the final minute, ending the frame with hard ground strikes.

Phillips had success with her stick and move strategy early in the second, narrowly missing a couple right-hand missiles from Dudieva. The Russian newcomer did close the gap with a flurry though, getting the fight back to the mat seconds later. Phillips again got into the top spot, and the two traded ground strikes, Phillips ending up with a bloody nose in the process.

After an early stalemate, Dudieva got the takedown a minute and a half into the final round, but was too fatigued to capitalize, allowing the American to get into side control and stay there until the final horn.
“I elbowed strikes, punched on top, and controlled the whole fight," said Phillips. "I won that fight. Plain and simple, I won that fight. I want to know what Milana did to win that fight. This was a really bad call."