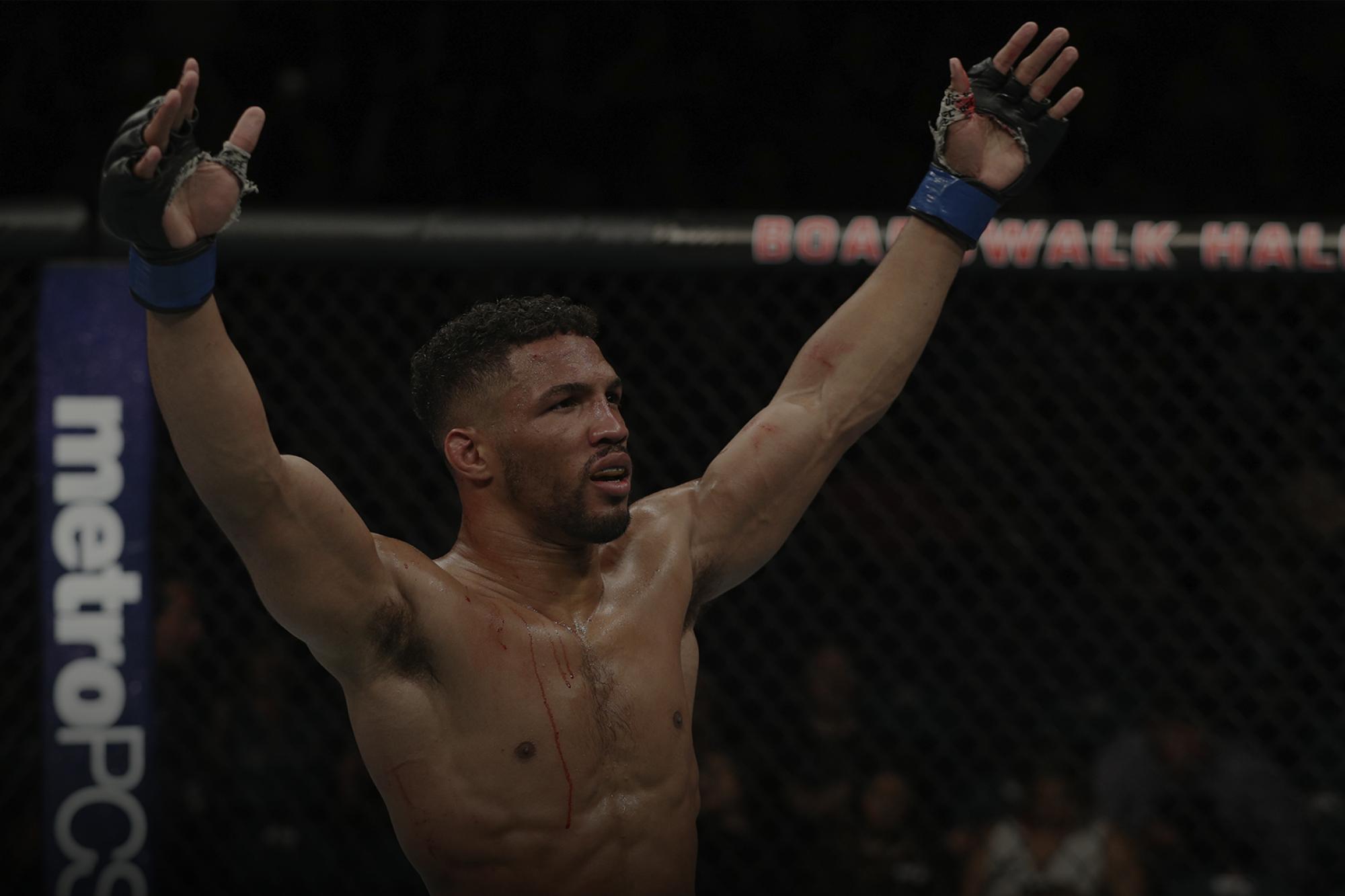 Preview the entire UFC Milwaukee card with this fight by fight preview
By Damon Martin • Dec. 11, 2018

KEVIN LEE VS. AL IAQUINTA
It's been nearly five years since Al Iaquinta gave Kevin Lee a very rude welcome in his UFC debut as the former Ultimate Fighter finalist earned a three-round decision in their lightweight matchup at UFC 169.

Now they will meet again, but this time Lee and Iaquinta are both ranked in the top 10, with each of them hoping to get back into title contention with a win. Lee is coming off a stunning performance against Edson Barboza in his last fight while building a 6-1 record over his past seven fights, with his only loss coming to former interim champion Tony Ferguson. Meanwhile, Iaquinta managed to go five rounds with Khabib Nurmagomedov on 24-hours’ notice back in April, and that was after he reeled off five straight wins, including four by knockout. The winner of this fight could be in line for a potential No. 1 contender's bout in 2019, so this five-round rematch is not only crucial for bragging rights, but also when it comes to the lightweight title picture next year.

As Milwaukee gets ready to host the UFC’s penultimate event of 2018, witness the extraordinary lives and action packed training camps of the night’s six star fighters in UFC Road to the Octagon: Lee vs Iaquinta 2.

EDSON BARBOZA VS. DAN HOOKER
Following a pair of heartbreaking losses in consecutive fights, Edson Barboza decided to switch up his training, and now he’s working with the coaches at American Top Team in Florida. Barboza is not only benefitting from the change of scenery, but he's also working with a slew of top-ranked fighters, including Dustin Poirier, Jorge Masvidal and Santiago Ponzinibbio. To get back on track this weekend, Barboza is going to have to stop the momentum of surging lightweight contender Dan Hooker, who comes into the fight after winning four in a row — all by knockout or submission — and who is looking better than ever since moving to 155 pounds. If there was an early pick for Fight of the Night, this would be the leading option.

As Milwaukee gets ready to host the UFC’s penultimate event of 2018, witness the extraordinary lives and action packed training camps of the night’s six star fighters in UFC Road to the Octagon: Lee vs Iaquinta 2.

ROB FONT VS. SERGIO PETTIS
Rob Font has long been considered one of the most talented fighters in the bantamweight division, but a lack of consistency has haunted him throughout his UFC career. He's picked up impressive wins, like his highlight-reel finish against Thomas Almeida, but then stumbled in his last fight against Raphael Assuncao. This weekend, Font attempts to move back into the win column while welcoming Sergio Pettis back to 135 pounds. Pettis has previously fought at bantamweight, but more recently he's been competing at 125 pounds. Now the former top five-ranked flyweight will return to his old stomping grounds while attempting to pick up a win over the No. 11-ranked fighter in the division.

JIM MILLER VS. CHARLES OLIVEIRA
It's been almost eight years since Jim Miller earned a submission win over Charles Oliveira in the UFC and now the two veteran lightweights will do it all over again. Their first meeting was very early in Oliveira's career, but Miller made the most of it with a kneebar to finish the fight less than two minutes into the first round. Miller is coming off another submission win in his last fight while Oliveira has picked up back-to-back finishes in his most recent fights at lightweight. It will be interesting to see how Miller approaches the rematch while Oliveira undoubtedly looks to avenge his previous loss in a fight that will kick off the main card on FOX.

ZAK OTTOW VS. DWIGHT GRANT
Veteran welterweight Zak Ottow will attempt to bounce back from a loss in his last fight when he takes on Dana White’s Tuesday Night Contender Series veteran Dwight Grant. During his UFC career, Ottow has bounced back and forth between wins and losses for each of his first six fights. Based on that pattern, Ottow is due for a victory, but to get it he'll have to go through Grant, who comes into the fight off seven straight wins, including a KO in his performance on the Contender Series that helped him earn this opportunity in Milwaukee.

JESSICA-ROSE CLARK VS. ANDREA LEE
A new women's flyweight champion has been crowned in Valentina Shevchenko, and now two top 15 competitors are about to face off this weekend as Jessica-Rose Clark takes on Andrea Lee. Clark has gone 2-1 since arriving in the UFC, including a win over Paige VanZant. She suffered a loss in her most recent outing and now she wants to start the climb back up the ladder when she faces Lee this weekend. Lee has long been touted as one of the best flyweight fighters in the world and she picked up a victory in her UFC debut. Now Lee will have to go through Clark if she wants to prove that she will one day deserve to challenge for that 125-pound championship.

BOBBY GREEN VS. DRAKKAR KLOSE
So much of Bobby Green's UFC career has been plagued by injuries, and that's mostly disappointing because every time he makes an appearance it seems to result in a fun fight breaking out. Green is a tough-as-nails striker with incredible heart and durability who never backs down from a challenge. This weekend, Green will face off with Drakkar Klose, who has proven to be a top prospect in the lightweight division with a 3-1 mark inside the Octagon, including an impressive unanimous decision win over Lando Vannata in his most recent performance. This is another potential show stealer on the preliminary portion of the card.

JARED GORDON VS. JOAQUIM SILVA
Both Jared Gordon and Joaquim Silva will attempt to get back on track when they meet in a lightweight showdown after both fighters suffered losses in recent fights. Gordon has been training at nearby Roufusport in Milwaukee, so this will be almost like a hometown show for him while Silva attempts to right the wrong from his last fight, which is only the second defeat that he's suffered during his pro career.

GERALD MEERSCHAERT VS. JACK HERMANSSON
Wisconsin's own Gerald Meerschaert will fight in front of a home audience when he looks for his third win a row after earning a submission and a knockout in his past two outings in the UFC. He meets Jack Hermansson, who has gone 3-1 over his past four fights, with all three wins coming by way of knockout. Don't blink during this fight, because Meerschaert and Hermansson both have a ridiculous finishing rate, so it's tough to imagine a scenario where they go to a decision.

DAN IGE VS. JORDAN GRIFFIN
They say you never get a second chance to make a first impression, but Dan Ige did his best to prove that wrong after he earned a jaw-dropping 50-second knockout in his most recent fight in the UFC following a loss in his debut. Ige will look to follow that up with another win on Saturday night when he meets veteran Jordan Griffin, who comes from Dana White's Tuesday Night Contender Series, where he earned a first-round submission finish back in July. If Griffin wants to keep his four-fight win streak alive, he's going to have to go through Ige in this intriguing featherweight matchup.

ADAM MILSTEAD VS. MIKE RODRIGUEZ
Former heavyweight Adam Milstead will make his second appearance at 205 pounds this weekend as he faces Mike Rodriguez, who earned his spot on the UFC roster by way of Dana White's Tuesday Night Contender Series. Milstead has produced some thrilling finishes during his career and the same could be said of Rodriguez. With both fighters coming off losses, it's likely they will leave it all in the cage to get a win.

CHRIS DE LA ROCHA VS. JUAN ADAMS
Chris de la Rocha got a monkey off his back the last time he competed in the UFC as he picked up a TKO win in June after suffering a pair of losses to start his career inside the Octagon. To make it two in a row, De la Rocha will have to go through a very promising prospect in Juan Adams, who stormed his way into a UFC contract after earning a first round TKO on Dana White's Tuesday Night Contender Series. Adams has promised he's the future of the heavyweight division, but to back up those bold claims he's going to have to go through de la Rocha in his debut.