"I wanted to fight in this division a long time ago, and I believe I can have good results fighting at this weight." - Milton Vieira 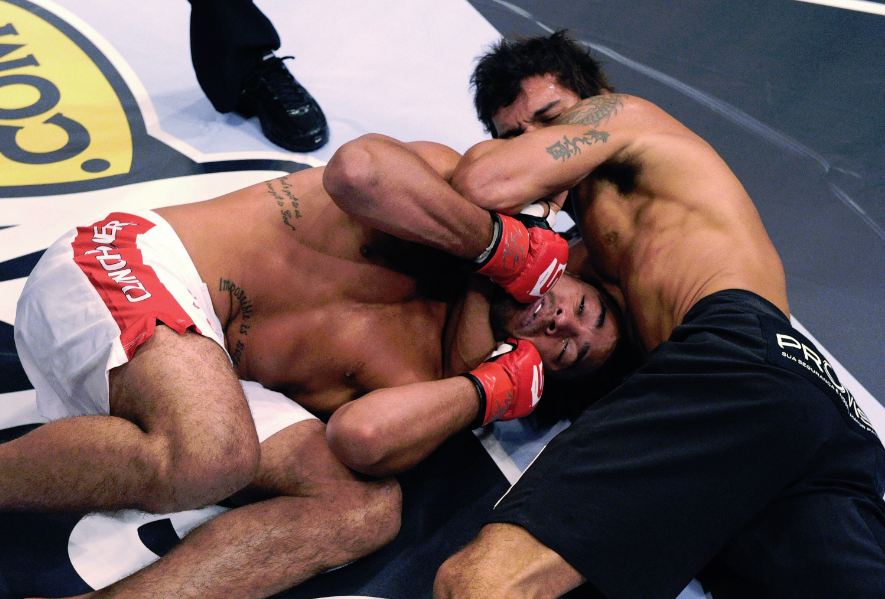 The anaconda choke. Once secured, the end comes quickly for those on the wrong side of it. But when the Godfather of the maneuver, Milton Vieira, locks it on, that’s a whole different story.

“I made this position more than 10 years ago,” explains the 33-year old Brazilian Jiu-Jitsu black belt. “I believe a lot in this position because I have many ways to acquire this submission when I am fighting. It has been a part of my life's work as a martial artist.”

It boggles the mind at first, given the prevalence of the choke in mixed martial arts and the varied array of fighters that use Vieira’s creation, but if you believe the Rio de Janeiro native is about to rest on his laurels, you would be sadly mistaken. He is constantly looking forward, constantly seeking the next goal. On Saturday night in Belo Horizonte, that next goal is a win in his UFC debut against countryman Felipe Arantes.

“Now is the best time in my life,” said Vieira. “I believe it is the perfect moment for me to make this debut as it relates to my mentality, physical strength, and skill set as an MMA fighter.”

An 11-year pro who studied under the late Carlson Gracie and who today works with former UFC middleweight champion Murilo Bustamante, Vieira (13-7-1) has paid his dues both at home and abroad, competing in Russia, Japan, and the United States while fighting the likes of Jake Shields, Hayato “Mach” Sakurai, Johnny Eduardo, and Luciano Azevedo. Currently sporting a three fight winning streak, Vieira made his first US appearance in over eight years last August, as he submitted Sterling Ford in the first round of a Strikeforce bout.

“It was a good experience because it was a big show that was affiliated with Zuffa,” he said. “I liked fighting in Las Vegas and the company received me well. It was a great introduction to the Zuffa family with a positive result in the fight.”

That positive result earned him a call to the Octagon for Saturday’s UFC 147 card and a bout with promising up and comer Felipe Arantes.

“He has a good striking game, but I believe I am a good striker too,” said Vieira. “I have been working a lot on that.”

And even beyond the clash of veteran and prospect and grappler and striker in front of a supportive Brazilian crowd is the hint of an old rivalry between Arantes’ Chute Boxe team and Vieira’s Brazilian Top Team, one which hit its height during the PRIDE days in Japan. But as far as Vieira is concerned, those days are not only long gone, but they were never a reality for him.

“I always had a good relationship with the guys from Chute Boxe even back in the time of PRIDE,” he said. “I believe this rivalry is not similar to what it was during the PRIDE days. Today, the teams respect each other as sportsmen.”

That doesn’t mean Vieira and Arantes won’t fight like enemies when the bell rings. The featherweight division is one of the UFC’s most competitive, and with the opportunity to make a statement to the rest of the 145-pound weight class present on Saturday, expect the two countrymen to put their best foot forward throughout.

“This is tough division but all the divisions in the UFC are tough,” said Vieira, who has fought at lightweight and welterweight over the course of his career. “I wanted to fight in this division a long time ago, and I believe I can have good results fighting at this weight.”

It’s hard to doubt him, considering his experience level and the tools he brings to the table. Now at his optimum weight, he should be even more dangerous, but there’s time to speculate on the future later. For now, all that matters for Vieira is Saturday night and the culmination of a career-long dream taking place in his backyard.

“I have worked my whole career to be able to fight in the UFC,” he said. “Now to have this opportunity to fight in the UFC and debut in my home country makes me very happy. Words cannot explain, but I plan on making a great show for both the American and Brazilian fans.”