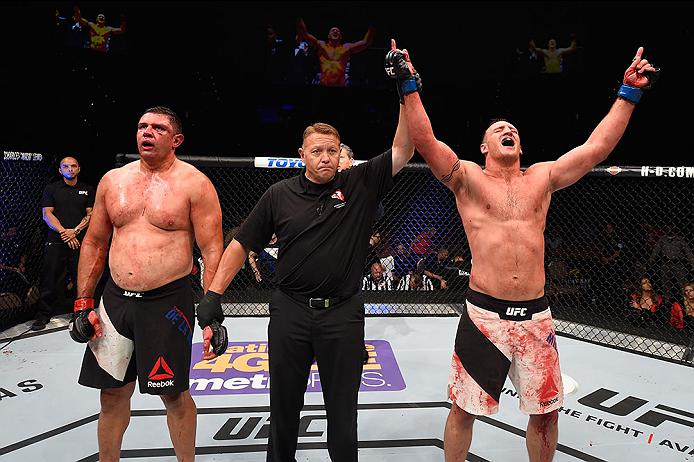 Adam Milstead celebrates after defeating Chris De La Rocha in his UFC debut" align="center" />
The only thing that gave Adam Milstead away was the PRIDE / UFC shirt. Otherwise, when watching him sing and play the song “Like I Love You,” on YouTube, it would be natural to guess that he was the next big thing on the music scene, a singer / songwriter about to go on world tours, not making a trip to the Octagon to fight Curtis Blaydes on Feb. 4 in Houston.

But his second UFC fight is the most important thing on his immediate to do list, and he’s hoping “Razor” Blaydes or any future foes don’t decide to rib him about writing and singing love songs.

“I’m just waiting for one of my opponents to get a hold of one of those and they just let me have it,” Milstead laughs.
RELATED: Milstead's matchup with Blaydes | Fighter bio

The Pittsburgh product may be too good to keep under wraps much longer. And though his musical talent is evident, he’s not doing it for fame and fortune at the moment. For him, it’s his release from days spent not only as a prizefighter, but a pipeline technician.

“It’s one of those things that helps balance out the violence in my life,” he said of playing music. “I work on a pipeline, so we deal with a lot of stressful situations, and then I’m in the gym sparring and training and punching things and other people are punching me back. So it helps calm my nerves, especially leading up to the fight. If you ever get into a fight on the street, you’ve got your adrenalin, boom, it’s there, it’s done. But when you’ve got a fight coming up, you’re thinking so much about what could happen and thinking about the what ifs. Playing music pushes all that out of my head. I’m able to relax a little bit more, catch my breath and just release some stress.”

And then when it’s fight night, he gets to throw bombs, a task he’s proven to be pretty good at, considering an 8-1 record that includes six knockouts, the most recent coming against Chris de la Rocha last May.

“My hands still hurt to this day,” he laughs, adding that he’s since corresponded with his opponent through Facebook. “He (De la Rocha) put up a good fight, but at the same time, I’ve never hit somebody so many times and they were still standing there. He’s a good guy, but it’s all business inside the cage.”

Watching the 29-year-old fight and then listening to him sing is why he’s an intriguing prospect. Remember, to become 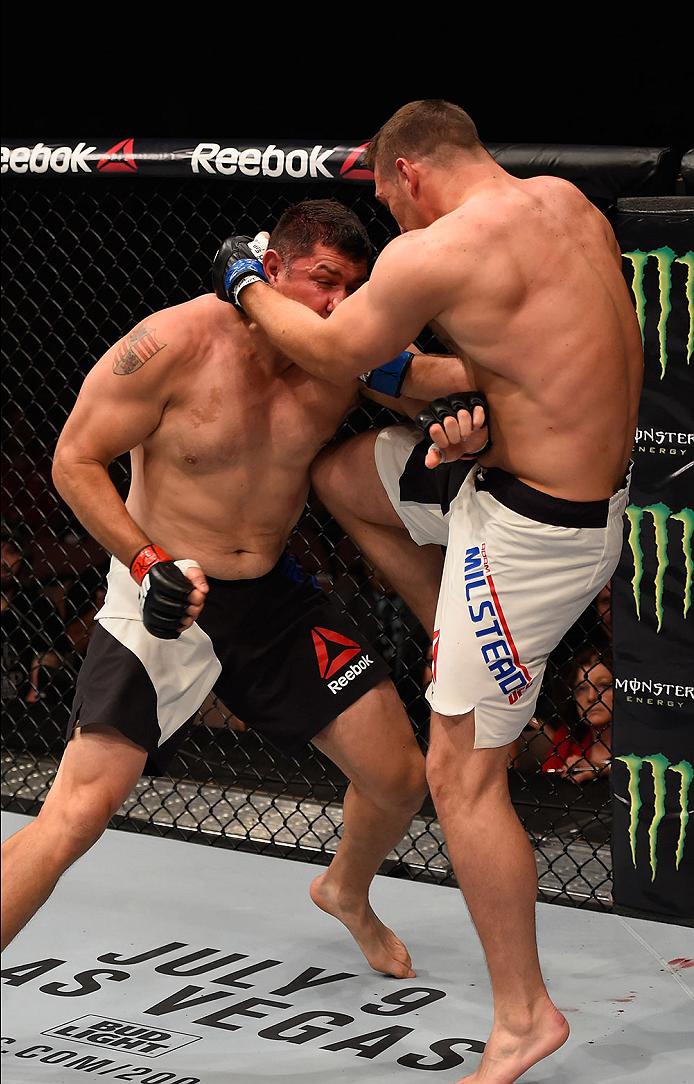 a star, there has to be more than what happens on fight night. People have to have a connection, and too often in the heavyweight division over the last few years, there haven’t been prospects like that. But Milstead is one, Blaydes and Justin Ledet are two more, and currently leading the pack of rising stars is Francis Ngannou. It’s set the stage for an interesting 2017 campaign among the UFC’s big men.

“I think we’re gonna start getting a lot of eyes watching the division,” Milstead said. “We used to be like that show that just ended up being on and people said, ‘Yeah, we’ll watch it, but we won’t pay attention to the things outside the cage.’ A lot of the fighters in the other divisions, people watch what they do on the outside of fighting as well as when they do fight, and I think we’re going to start drawing attention. You’re gonna start seeing some big names coming out of this division and the guys that are coming in now, I can see where the UFC wants to go. They’re not looking for these huge, big guys; they’re looking for guys that are more athletic who tend to put on a show. And I think that’s a great thing for the sport; it makes for a fun night to watch. It makes it harder for me because these guys are athletic too (Laughs), but I really think it’s a good thing and it’s still wide open. Two or three wins can really propel you, even into a title shot.”

No, Milstead isn’t shooting arrows at his friend and training partner, UFC heavyweight champion Stipe Miocic, but in this business, a fighter has to be ready when his name is called, and in this division, an opportunity can be one fight or five fights away. Either way, Milstead has to be ready – not just to accept an opportunity, but to capitalize on it.

It’s what he told a group of local fighters in the locker room before their bouts, as he relayed his story and let them know that they needed to remember what they were fighting for.

“It was a dream come true,” he said. “It’s what I wanted, what I worked for. It’s motivation. You want to be an inspiration to people and that’s something to be grateful for.”

So what does Adam Milstead fight for? He fights for his late father, who never got to see his son in the Octagon, but who would undoubtedly be proud of the man he became.

“My dad was a truly genuine person,” Milstead said. “He pushed me, but, at the same time, he knew when I needed to back off and when I needed an escape. He was that strong figure that was always there that I could lean on and depend on. All I needed to hear, and I know I would hear it from his voice to this day, was that he was proud of me. And I’m pretty sure that’s what he would say and that’s all I was looking for. He gave me so much growing up as a child, so I can even give him back a little bit, then it’s worth it in the end.”