Miller's Long Cold Winter is Over

"My goal has always been to become the lightweight champion and I’m looking to work myself back into title contention." - Jim Miller 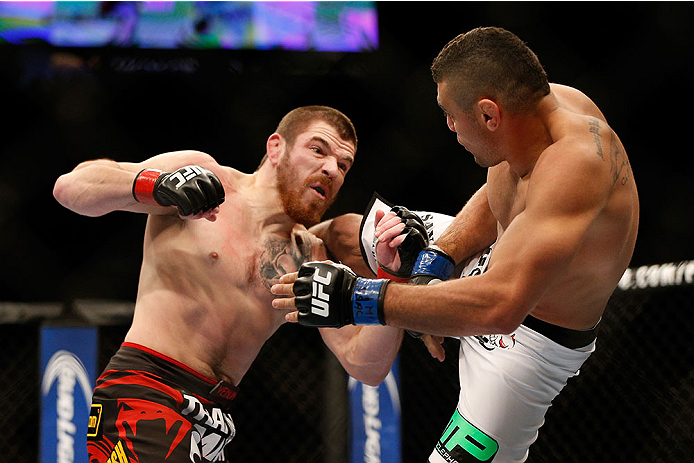 A career in mixed martial arts is a rigorous trade by any measure and there are numerous elements that can create pressure and strain in both the physical and mental realms. Therefore, it is crucial for fighters to have a release - a place where peace of mind can be found - in order to recharge their resources and keep themselves dialed in and focused.

For Jim Miller, the expansive woodlands of northern New Jersey are where that particular brand of “zen” is located. The outdoorsman has long enjoyed challenging himself against the natural elements, and his hands on approach to what is otherwise recognized by most as luxury, is a further extension of the blue collar work ethic he’s carried throughout his life.

The scrappy tenacity he’s shown for the past six years under the UFC banner doesn’t stop once he crosses the threshold of the Octagon, as the 30-year-old is as D.I.Y. as can be found in this day and age. Any meat his family eats has been hunted, field dressed and cured by his own hands. Just as the after dinner beverages he enjoys outside of training are brewed from his own personal recipes.

Growing up in the region he was raised and still resides in makes those endeavors possible, but it is also part of the country where Mother Nature can get nasty and show her worst side.

That was certainly the case this past winter as the season came to call in the final months of 2013 and extended well into the first several months of the New Year. Where an endless string of gray days that fold into darkness is part of the norm, several feet of snow dumped in multiple intervals coupled with lengthy spells of sub-zero temperatures made the winter of 2013 as trying as any in recent memory.

With those circumstances at hand, the activities Miller typically has used to smooth out the rough edges weren’t regularly available. And that, in addition to his general love for the scrap, has him primed and ready to get back to work inside the Octagon. The perennial lightweight contender will return to action this Saturday night at UFC 172 in Baltimore, and where he’s always been naturally ornery inside the cage, he’s been champing at the bit to sling some leather under the bright lights.

“I really love the winter and enjoy the cold and the snow, but this winter went on so long I was like, ‘enough is enough,” Miller said. “We still have snow on the ground now in April. There are days where the temperature hits the 50s and 60s, but the snow just won’t go away because it was piled so high. Then when it melts you are dealing with all the water.

Where the veteran lightweight has spent the past few months dealing with the unexpected obstacles the tedious winter season threw his way, his adapting hasn’t stopped in the lead up to UFC 172. Where he was originally slated to face a surging Bobby Green, the former Strikeforce fighter was forced to withdraw one week before the fight, leaving the UFC to scramble to find an opponent for Miller on extremely short notice.

Nevertheless, the UFC roster is lined with fighters who are ready to step up when matchmaker Joe Silva makes that call. Now, the 155-pound staple will face scrappy Hawaiian Yancy Medeiros - who was set to face Joe Ellenberger on the same card - on the Pay-Per-View portion of the event. While a change of opponent is never an easy thing to deal with, Miller is a true veteran of the fight game and has the ability to keep things in perspective.

He certainly appreciates the tools every one of his opponents has and will bring to the Octagon on fight night, but he fully embraces the range of talents in his own arsenal. Miller doesn’t spend too much time worrying about what his opponent plans to do, and rather puts his focus on imposing his will and own brand of punishment when the cage door closes.

“I think this fight will play out anywhere I want it to and that is the same mindset I carry into all of my fights,” Miller said. “In the past, I haven’t faced a lot of opponents who were willing to go to the ground with me, and then it is on me to work my movement and use angles to cut off the Octagon. I have to fight my fight and work my game plan.”

While a win over Medeiros won’t catapult Miller to the front of a crowded title picture, it will help him establish the type of momentum he’s known to carry. Throughout his career he has strung together multiple winning streaks, including a seven-fight run he put together over an impressive two-year stretch between 2009-2011 that carried him within striking distance of a title shot.

With the current landscape of the lightweight division being more competitive than it ever, Miller knows it is going to take some serious work to make his way to a championship opportunity. Fortunately for Miller, hard work has never been an issue. In fact, there is something in his genetic makeup that makes him look forward to the biggest challenges, and making his way up the ladder at 155 pounds is a task he’s eager to tackle.

“I’m looking to get an impressive win and hopefully that will get me a top opponent in my next fight out,” Miller said. “My goal has always been to become the lightweight champion and I’m looking to work myself back into title contention.”