Miller vs. Miller, Dodson vs. Jorgensen in Fan Expo Superfights

Plus the FINALS of the Four-Man Pro
Submission Only Tournament!

LAS VEGAS, NEVADA - The Ultimate Fighting Championship® is proud to announce the Official Superfights for Grapplers Quest®, the official grappling tournament at the UFC Fan Expo® on Friday, July 5 and Saturday, July 6 at the Mandalay Bay Convention Center in Las Vegas 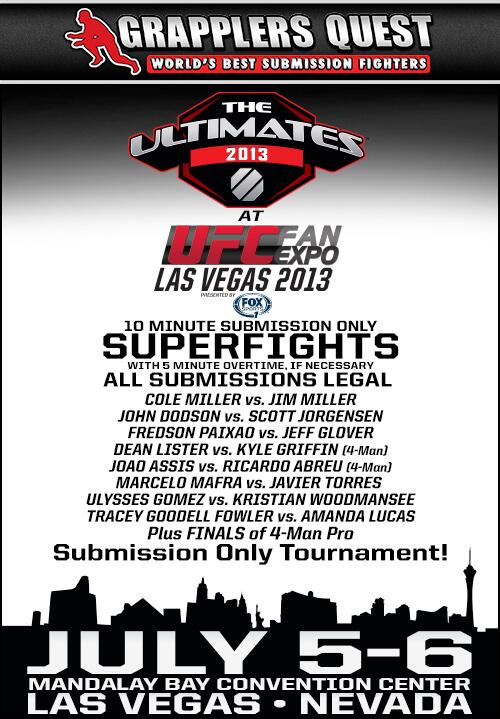 The much anticipated event features nine blockbuster superfights, including a four-man Pro Tournament.

John Dodson, winner of The Ultimate Fighter season 14, will be challenging Scott Jorgensen in what promises to be a fast-paced Submission Only match.

"The new Grapplers Quest Submission Only Rules for the Superfights and this all-star lineup will have every grappling fan on the edge of their seats, so you’ve got to be there LIVE, " an excited Brian Cimins, President of Grapplers Quest, said.

Tournament Space is limited, so register today at http://bit.ly/UFC2013

The UFC Fan Expo® in July will feature more than 300,000 gross square feet of activities for UFC fans, including meet and greets and autograph sessions with top UFC and STRIKEFORCE® fighters, Q&A sessions with top UFC personalities, as well as grappling tournaments and other special events. More than 100 exhibitors will also be on hand, giving fans the opportunity to purchase and experience some of the best sports and lifestyle products on the market today. This marks the third UFC Fan Expo® held in Las Vegas since its inception in 2009, with additional UFC Fan Expos being held in Boston, London, Toronto and Houston.

On top of all the great fan activities, the UFC Fan Expo® will be held in conjunction with a major UFC Pay-Per-View event scheduled for July 6 in Las Vegas.

For more information on grappling and jiu jitsu tournaments and events worldwide hosted by Grapplers Quest® and to register online, visit: http://GrapplersQuest.com