Miller Still Fighting to Prove Something

"I still have stuff I need to do in the sport and I still have things to prove to myself." - Jim MIller 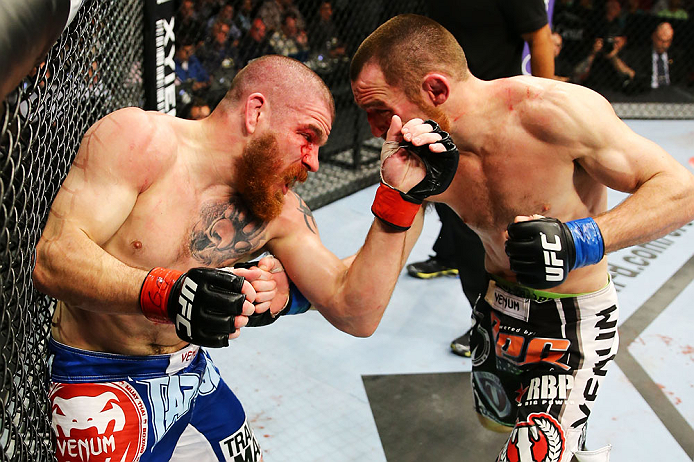 UFC 168 competitor Jim Miller doesn't take any comfort in having his submission defeat against Pat Healy turned into a no contest after Healy tested positive for marijuana following their UFC 159 bout.

"We're professionals and we are constantly tested, and when you fail that test it sucks," said the NJ-based fighter who takes on Fabricio Camoes on December 28th at Las Vegas' MGM Grand Garden Arena.

"I've been submitted once before against Nate Diaz but the circumstances leading up to the submission were the difference in this one. With Pat Healy it's the first time in my career that I've ever gassed. I've gotten tired before and I've slowed down because of the pace of the fight, but that was the first time I've ever gassed out. It's not a feeling that I like and sometimes it's one of those nights. I was in good shape but it was a different feeling."

For Miller, that different feeling has provided some opportunity to take stock in his career that has included fifteen fights at the sport's highest level of competition. > Watch: Miller subs Charles Oliveira

"As I put more mileage on my body it's gotten tougher to fight at the pace that I have been," he said. "It's harder to fight every three or four months now. I need a little time off now. I feel the pain of having been a professional fighter and having fifteen fights in the UFC, but it's a feeling I'm addicted to; standing on the canvas in the Octagon is a feeling I'm addicted to."

He will get a fix for his addiction on the main card that includes a title rematch between Anderson Silva and the man who took his belt, Chris Weidman, just three days after Christmas. Fighting over the holidays is hard on Miller, but not for the most obvious reasons.

"This is my job, and it's how I put presents under the tree and put food on the table," said Miller, who will leave his pregnant wife and their three-year-old daughter at home in New Jersey while he goes to the office. "I don't have much of a problem with it. My family is a food family and we make food, cookies, canning stuff and we do that for gifts to each other. That's the hardest part, cutting during Christmas with all that food around, but it's nothing I'm not used to. I've been cutting weight my whole life."

In Camoes, Miller faces a wily veteran with strong submission skills. Coming off a unanimous decision loss to Melvin Guillard, Miller says, will make his opponent even hungrier for the W.

Miller, a black belt in Brazilian Jiu-Jitsu under Renzo Gracie-trained Jamie Cruz, will surely be put to the test if the fight goes to the ground against Camoes, a man who has submitted half the men he has faced.

"He's good on the ground and he's really good at taking guys' backs," said Miller. "He's a tough guy; there are no slouches in the UFC and he's definitely not one. He's very dangerous and has lots of experience. I have to fight smart and fight my fight."

When Miller does fight his fight, it's usually bad news for his opponent. Just ask Joe Lauzon. Their Fight of the Year last December 29th saw "J-Lau" go through painful post-fight scar reduction procedures after taking elbows to his face and forehead.

Miller says he doesn't watch his fights, but that one he remembers daily.

"I still feel some of the pain that I experienced in that fight in my day-to-day training," says Miller. "I left my mark on him and he sure as hell left his mark on me. That was one of those fights that took a little out of each of us, you know? For this fight I'm focusing on getting better, staying in shape and keeping a positive attitude. As professionals we have to learn to work around things and just push forward."

And despite being just 30, given his all-out fighting style, Miller may soon be facing the twilight of his stellar career. > Watch: Miller's submission against David Baron

"I don't really contemplate it but I know it's coming," he said. "You only have a certain amount of fights, especially at this level. There aren't many guys with 20 fights, and I've got fifteen of those in the UFC. I know that sooner or later I am going to need to call it quits but I'm still not finished. I still have stuff I need to do in the sport and I still have things to prove to myself. I've made a lot of progress in the last few years, but I don't think I've been able to show it inside the cage. It all comes down to the body. My mind is there. The technique is there. Sometimes some other things don't want to cooperate and you just have to deal with it. You can't fight forever."