Miller looks to take out some frustrations in Atlantic City 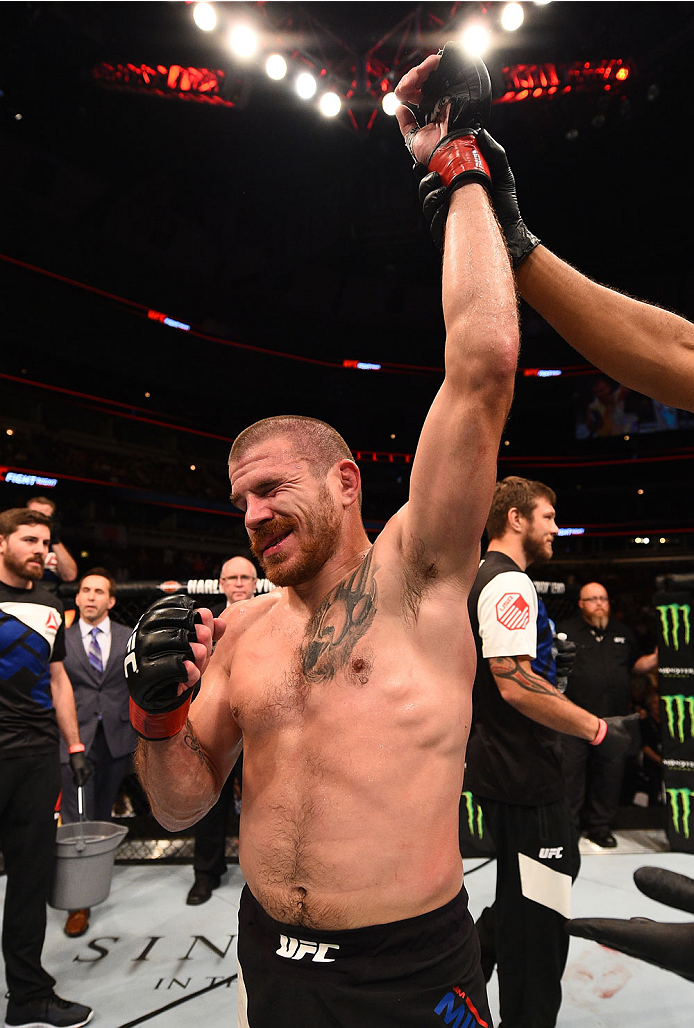 Jim Miller has the most victories in the history of the UFC lightweight division and sits in a three-way tie for sixth place overall with former champs Anderson Silva and Rafael Dos Anjos with 17 wins, three back of clubhouse leaders Georges St-Pierre, Donald Cerrone and Michael Bisping.

When he steps into the cage on Saturday night to face Dan Hooker, he’ll once again draw level with Bisping for the most total Octagon appearances with 29 and while the former middleweight champ seems to be leaning towards hanging up his four-ounce gloves after one more appearance, the veteran lightweight has no such plans of his own.

“I feel like I’ve left a mark and I’m not done yet; there is still more to come,” said Miller, who will celebrate 10 years in the UFC this October. “I’ve been in quite a few good fights, I’ve taken pretty much every fight that has ever been offered to me and I’ve never pulled out of a fight.

“He’s been in the UFC a few years longer than I have and that’s one that shows his longevity, but it also shows my willingness to step in there and my activity level,” he said of Bisping. “I’m pretty certain that I’m the Cal Ripken Jr. of MMA. I think at this point it’s safe to say that.”

While the records are an indelible testament to the lightweight iron man’s durability and willingness to accept whatever matchup has been offered to him over the years, they have never been how Miller measures himself as a competitor.

From Day One, the Sparta, New Jersey native has sought to deliver entertaining fights and build a reputation as “a fighter’s fighter,” the kind of guy that some fans and observers might overlook and undervalue, but someone that fellow competitors and those who don’t get distracted by shiny objects and social media banter understand is one of the toughest outs and most game competitors to ever step inside the UFC cage.

“That always meant more to me. It always was more important,” Miller said of having the respect of his peers. “I appreciate everybody that is a fan of mine, but if people aren’t a fan of mine and talk s*** about me on the Internet – and I’ve had plenty of people do that – I don’t care; it doesn’t bother me. You’re entitled to your opinion and I’m the one that does this for a living.

“A brain surgeon probably doesn’t care what somebody who watches Grey’s Anatomy thinks of them,” he added with a laugh. “They’ve gotten to that point where they’ve specialized and they probably don’t care what Joe Blow on the street thinks about surgeons or whatever. They’re focused on their peers and what they think of them.”

And Miller’s contemporaries think the world of the feisty lightweight veteran.

Prior to his last fight with Francisco Trinaldo, I spoke to a collection of his former opponents, including former lightweight champ Frankie Edgar, who faced him during their days on the East Coast regional circuit and Joe Lauzon, who engaged in a pair of close, back-and-forth battles with Miller on FOX, and, to a man, every one of them praised the veteran’s toughness and tenacity and listed him as one of the fighters they’re going to tune in to watch every time they step into the cage because they know Miller will leave every ounce of himself inside the Octagon.

“Getting that respect from guys that I’ve fought is pretty cool,” said Miller. “I’ve had heavyweights come up to me and tell me they’re my biggest fan and that was awesome.

“For a heavyweight to be like, ‘Man, I love watching you fight.’ It was one of those ‘Holy Shit!’ moments because that’s pretty cool. We’re completely different styles of fighting, different divisions and for someone like that to respect me – that was pretty cool.”

After putting together a nice three-fight winning streak over the second half of 2016, Miller’s follow-up campaign in 2017 was a disaster.

Tough losses to Dustin Poirier and Anthony Pettis left him on a two-fight losing streak heading into a matchup with Francisco Trinaldo in October. From the minute the fight in Sao Paulo started, it was clear Miller was off, and 15 minutes later, the 34-year-old had picked up his third consecutive loss. 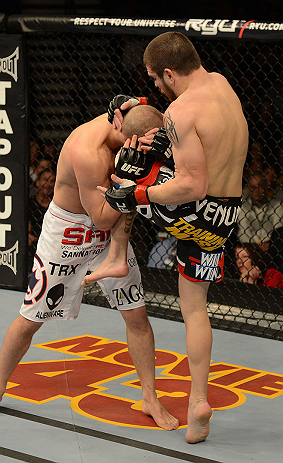 “Three in a row sucks,” said Miller, who acknowledged that he was battling an illness in Brazil. “Let’s be perfectly honest: it sucks and there is definitely added pressure being on that skid coming into this next one, but what frustrates me and kind of pisses me off is that I had a fight with Poirier where if I had thrown three more leg kicks, he couldn’t stand up and I win that one.

“The fight with Pettis, I made a tactical error in trying to guide him up so I could take his back. If I had fought more conservatively – which isn’t my style – I could have won the second and then it’s one-to-one going into the third and hopefully I bled on him enough that he gets a little desperate.

“I’m not taking anything away from Trinaldo, but I performed way worse against him and those last two guys would have finished me if I fought them like I did Trinaldo, given how dangerous they are,” he added. “That’s what gets me because it was just bad. It was just bad.

“That’s the frustrating part and the whole plan is to take it out on Dan in Atlantic City.”

When this weekend’s card was first announced, Miller was certain it would be the site of his 2018 debut as even though he lives closer to Scranton than the does “The Shore,” he’s known as a New Jersey guy and figured he’d end up fighting in his home state.

Not that he’s opposed to doing it or anything; it’s just that he would have preferred to get his year started a couple months earlier and made this his sophomore appearance instead.

“I don’t like taking time off,” said Miller, who has fought at least three times each of the last three years. “This is basically six months in between fights and that’s too long for me. I don’t like that. I’d rather hopefully come out of this one healthy and hop right into another fight in two and a half, three months and not have to take the time off.

“I used to (take time off) because I love training and I never got hurt that bad and was constantly in there, but now, there are some many things that can pull me away if I’m not fighting and if the door doesn’t get opened and closed every day, things start to seize up a little bit, so I prefer to stay in it.”

With his unwanted extended hiatus about to come to an end, Miller’s now focused on bringing his three-fight losing streak to a halt and ending Hooker’s run of success since returning to the lightweight division.

Though he acknowledges that the 28-year-old New Zealander has looked very good in his last two outings – finishes of Ross Pearson and Marc Diakiese – the veteran lightweight is only worried about making sure he’s sharp and ready to execute everything he’s been working on in the gym in the weeks leading up to Saturday’s contest.

“Fighters change, opponents change, so I focus on myself 100 percent and I’m just trying to do everything that I can the best that I can and feel the best that I can at fight time,” said Miller. “I’d be lying if I said I didn’t need it, but fortunately, I’ve been feeling pretty good and hopefully I keep this going and show up on fight night ready to rock.”