Miller fighting outside North America for first time since 2008 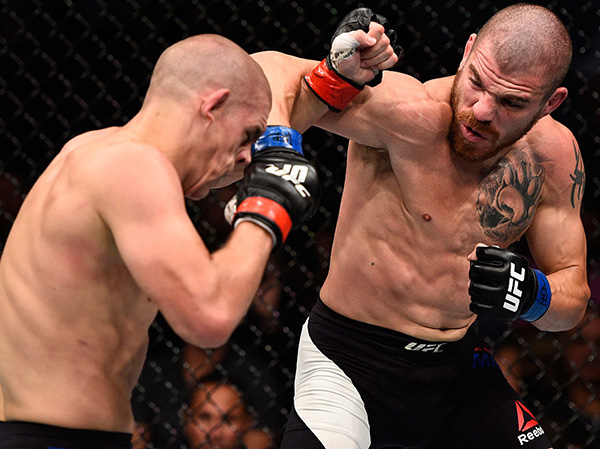 All the UFC needed to tell Jim Miller was that his next fight against Francisco Trinaldo was taking place in Sao Paulo, Brazil, and he was in. Actually, that’s not entirely accurate, because Miller says yes to every fight, but to gain another experience by fighting outside of North America for the first time since 2008 just added to his excitement level for this Saturday’s bout.

“This one, there’s a little bit more adventure to it because I’m going down to Brazil to fight,” said Miller. “So I’m actually really excited for the experience.”

At this point in a career in which he’s already fought 39 times, Miller isn’t stepping into the Octagon for the usual purpose. Sure, he’s providing for his family and that’s the main motivation, but while most are chasing titles, megafights and Twitter followers, the New Jersey native makes the walk for a more pure reason.

“I’ve always tried to push myself and I strive for putting myself through the gauntlet sometimes to show myself what I’m capable of,” he said. “That’s really what drives me. I appreciate people who are fans of mine, and I go out and fight, but I’m not fighting to put on a show for people. It’s hard to tell people this. (Laughs) I’m fighting to fight at my best, and if I do that, then most people are going to enjoy it.”

They have for the over nine years he has graced the Octagon. Miller has had his ups and downs like any fighter, and while he has never fought for a belt in the UFC, his fan base is a loyal as that of any world champion. He’s almost like a modern day Chris Lytle in that win or lose, he will always show up to fight, and that fighting spirit is good enough for his fans.

“It means a lot to me, it honestly does,” Miller said of the fan support he receives. “I really appreciate people that are fans of mine. I’ve had other fighters come up to me, and I’ve had heavyweights come up to me and say that they’re my biggest fan. For a heavyweight to say that about a lightweight, it meant a huge deal to me. I appreciate it because it’s only by what I’ve done inside the Octagon. It’s not because of extra things, it’s not because of pageantry or anything like that. I got into fighting because I love the sport and that’s it. Not because of talking at press conferences or anything like that. So when somebody’s a fan of mine, they’re a fan of mine because of what I do inside the cage.”

And despite back-to-back losses to Dustin Poirier and Anthony Pettis this year, Miller is still a fighter who has plenty to give in the Octagon. He didn’t know if that was going to be the case from mid-2014 to early 2016, when he went 1-4 and questioned whether he still had what it took to compete at the UFC level. In fact, he planned on retiring at UFC 200. But 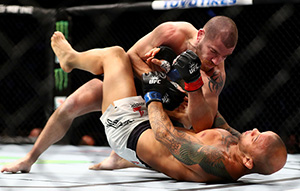 what he didn’t know was that he was dealing with Lyme disease, something that wasn’t diagnosed until before his bout with Takanori Gomi.

Once treated, Miller beat Gomi, Joe Lauzon and Thiago Alves in succession. And though the Poirier and Pettis losses were setbacks, the 34-year-old firmly believes that he doesn’t just have it in him to beat Trinaldo, but to keep competing at least until he hits 50 pro fights.

“Yes, I think so,” he said of hitting the big 5-0. “The thing is it’s not that long. If I keep the pace up, we’ll see if I can get to 50. There’s that side of me that’s looking for something, looking for that next thing, and I’m the provider for my family, so I need to. So who knows, if I find it after another two or three fights, that might be it. But the way I’m feeling right now, I think I can definitely get to 50.”

But what about that elusive championship belt? Is it something that still piques his interest?

“It’s definitely there,” he said. “I know I’m chasing it because I’m chasing my best, and the last two years haven’t been the best for me. I had a pretty rough patch there in 2015 and in the beginning of 2016, and I’m still working my way back to where I was physically and I know that if I get there, that 20-pound belt could very easily be mine. This sport’s a lot about timing too and that’s really what it comes down to. Maybe my time has passed for that. Maybe I’m not going to be able to get the momentum, maybe with my body breaking down the way it has been, who knows. But I know that it’s there and I know I can take it.”

And even if that chance doesn’t come, we’re still going to see Jim Miller fight as hard as he always does. That’s the best guarantee you can get in this sport.

“I’m here to fight,” he said. “I enjoy the fight and I enjoy stepping into the Octagon with these guys that I respect. I’ve fought a Who’s Who and there are still a couple names on the list that I want to fight. This will be my 40th fight and I’ve never picked a fight in my career. If I can make weight, train and get to the fight, I’m gonna take it.”