One day in early December, Jim Miller emailed outgoing UFC matchmaker Joe Silva in hopes securing a fight early in 2017. A couple days later, Silva responded with an offer. Moments after he hit send, a two-word reply from Miller showed up in Silva’s inbox.

Silva’s response, which Miller later shared on social media, summed up everything you need to know about the 33-year-old lightweight veteran as succinctly as possible.

“I guess most other fighters aren’t like that, where they need a couple days to settle on a fight,” Miller laughed, recalling the now infamous email interaction that led to his matchup with Dustin Poirier this weekend at UFC 208. “(For me), if it’s midnight and I’m getting out of the shower, hopping into bed and you offer me a fight, it’s like, ‘Yeah, let’s do it.’”
RELATED: Miller's matchup w/ Dustin Poirier | Fighter bio

A pro since 2005 and a fixture in the deepest division in the UFC since 2008, Miller has made a living taking tough fights against tough opponents, racking up 17 wins and 25 Octagon appearances in the lightweight ranks while earning a reputation for being one of the toughest outs in a division loaded with talented fighters.

Prior to his fight with Takanori Gomi last year at UFC 200, Miller questioned his trademark toughness.

He was coming off a unanimous decision loss to Diego Sanchez, his fourth loss in five fights, and everything hurt. Getting out of bed was a chore and the stubbornness that would carry him through sluggish days in the gym wasn’t enough to help shake him from the funk that he’d been feeling for the previous year.

After more than a decade compiling one of the most impressive resumes in lightweight history, the Sparta, New Jersey native was convinced the years of wear and tear were finally catching up to him and that ability to compete with anyone in the division at the highest level in the sport he prided himself on for so long was starting to fade. As he prepped to fight the Japanese legend, Miller decided that UFC 200 would be his swan song.

But a funny thing happened on the way to his retirement match. 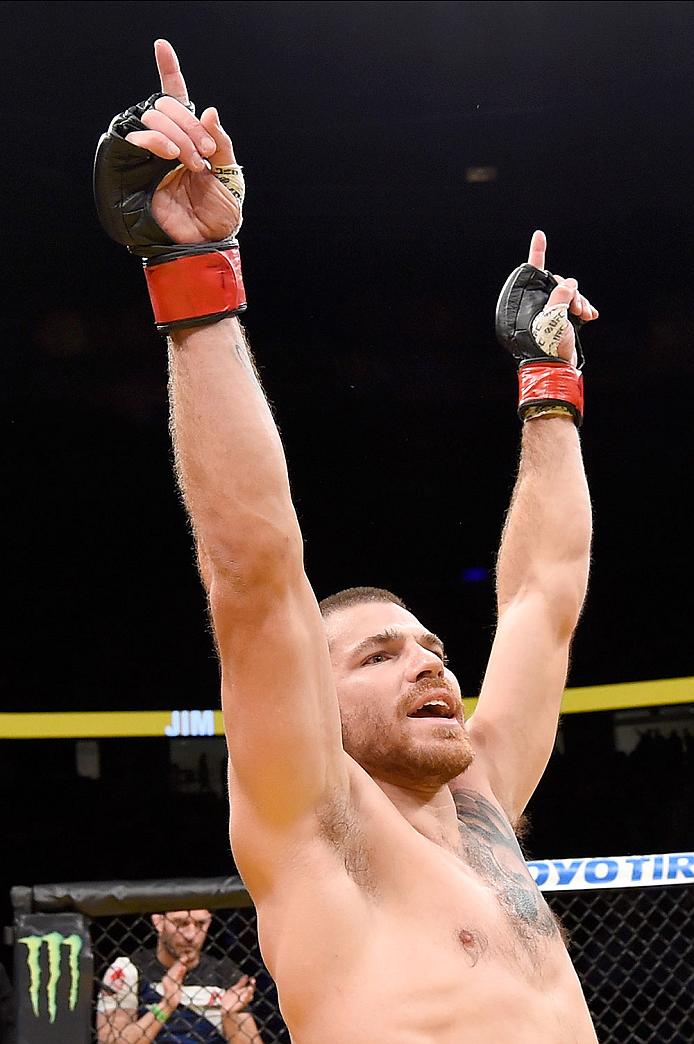 A trip to the doctor revealed that Miller had been suffering from Lyme disease and some antibiotics had him feeling better within a matter of days. Good news for Miller; bad news for Gomi, who lasted just over two minutes before falling to the rejuvenated lightweight veteran.

“I’ll tell you flat out: I was questioning myself,” Miller said of his struggles prior to UFC 200. “I was questioning my toughness and my ability because I didn’t know why I felt like that because I’ve always been the type that I’ve just worked harder. If I felt like I was getting tired in the room, I just worked harder. ‘Well, you’re getting slow this round, so push it up the next round because that means you need to put some more work in.’ Not always the best idea, but it worked for me.

“I‘m not the best athlete and I’m not the most technical when it comes to any aspect of this sport – far from the best jiu-jitsu practitioner, wrestler, striker – but I’ve always been good at dealing with pain,” continued Miller, who added victories over Joe Lauzon and Thiago Alves to his resume after beating Gomi to close out the year on a three-fight winning streak. “I guess that I kind of proved to myself that I am a fairly tough m*****f**** because it’s just what I’m good at. If some of my peers were dealing with what I was dealing with, they probably would have hung ‘em up a little bit early.

“Maybe that’s intelligence, but I know that when I’m on the mats or the door closes behind me, I’m not going to stop fighting because something hurts because I’ve gotten out of bed when things were hurting.”

Saturday night, Miller will be back doing what he has always done, stepping into the cage with Poirier in yet another tough fight.

While some will look at the resume he’s amassed inside the Octagon and discount his accomplishments because he never fought for UFC gold, Miller heads into this weekend’s main card opener excited to test himself against “The Diamond” and with no regrets about the approach he’s taken to his career.

“I like the tough fights,” he said. “I like fighting guys that are dangerous and Dustin is definitely a dangerous fight. I love the opportunity to fight dangerous men because it brings out the best in me. That’s why I enjoy the tough fights.

“I’ve never asked for an easy fight or wanted a gimme or to pad my record or (cash) a paycheck or anything like that. I’ve sacrificed too much time away from my family and banging up my body to want those easy fights because they don’t do anything for me. It’s not who I am.

“Could I have done things differently and maybe gotten a little more recognition if I had padded my record or something like that, asked for good matchups?” he pondered aloud. “I could potentially be in a better place in the division or in the bank account, but I’m here to test myself against the best.”