Miles Johns Has Found 'Freedom' In The Octagon

The feeling, achieved ironically enough by suffering the first loss of his professional career, has completely changed the perspective the 27-year-old has on his career inside the Octagon.

“I feel like after winning so many fights in a row, it had been kind of one of my subconscious fears — what will it be like losing, with my family, my kids and everything like that?” Johns explained of his mindset heading into the fight that would result in his first professional loss in February of 2020. “We went through that, we dealt with that together and so now it’s a feeling of freedom, like I now have nothing else to worry about.” 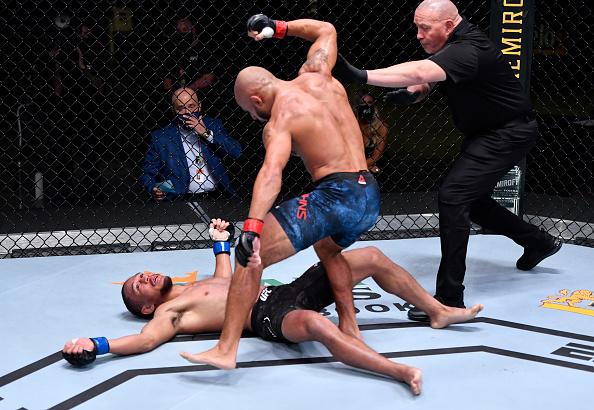 Miles Johns knocks out Kevin Natividad in a bantamweight bout during the UFC Fight Night event at UFC APEX on October 31, 2020 in Las Vegas, Nevada. (Photo by Jeff Bottari/Zuffa LLC)

With not only his first loss behind him, but a victory and performance bonus in October 2020 to get him back on track, the Kansas native said he feels comfortable and confident heading into his fourth fight in the UFC.

“I feel like a completely evolved fighter, mentally and physically,” Johns told UFC.com during his fight week interview ahead of UFC Fight Night: Makhachev vs Moises. “Mentally, I’m starting to feel like a vet to this game. I’ve been through the ups and downs, I’ve gotten a Performance of the Night bonus, I’ve done that stuff; fought during the quarantine, things like that, and it just makes me feel like I’m settled in here and it’s nice. It’s an oddly nice and comforting feeling.”

MORE UFC FIGHT NIGHT: Fighters On The Rise | Best Finishes From Saturday's Fighters | Thiago Moises Wants To Beat The Best | No Turning Back For Amanda Lemos | Billy Quarantillo Takes No Days Off

The former LFA bantamweight champion said he can’t help but feel relaxed at the thought of making his return to the familiar UFC APEX on Saturday for the third time in his career — at first, vying for a spot on the UFC roster on Dana White’s Contender Series in 2019, then once again last October in what has quickly become the most notable fan-less colosseum in combat sports.

“It’s been a little bit since I’ve been back here, but it feels like home, honestly, now. It’s a weird, comforting, relaxing feeling.”

"I believe that it will be a good test for me to show that I too, am tough and I have the heart of a lion." @MilesXJohns talks about his upcoming bout with Anderson dos Santos at #UFCVegas31 🔉⬆️ pic.twitter.com/qrgAOyKB2j

While many things for Johns are the same heading into this fight week, the biggest difference will be the opponent standing opposite him: similar in UFC experience, but with a much loftier amount of overall cage time.

While Anderson dos Santos will also be entering the Octagon for the fourth time in his UFC career, it will be his 30th professional fight overall — more than double Johns’ professional experience.

Johns, one who takes pride in his ability to push the pace like any wrestling-based fighter does, believes dos Santos has used his pressure and overwhelming presence in past fights to break his opponents; it’s a strategy that will surely deteriorate quickly once “Chapo” steps foot in the Octagon. 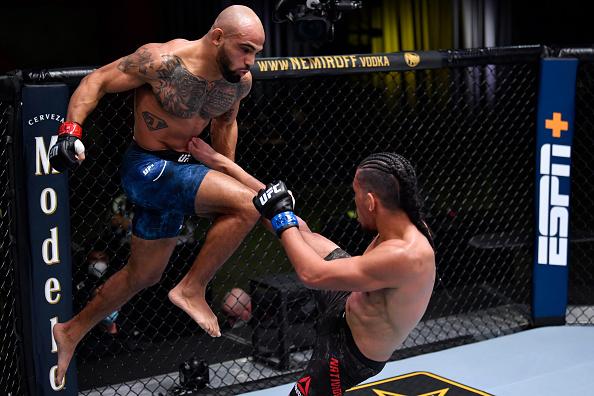 “That’s not gonna work with me. When two wrestlers go and they have that pace, then it comes down to speed and skill and technique,” Johns said with a chuckle. “He gets a little wild in there. I think his ego gets going a little bit, I think he likes to chin up and tell people to come in and take shots and stuff and that’s gonna get you in trouble with a guy like me.”

Excited to finally be “stepping into the fighter I know I am,” Johns said that he believes his speed, athleticism and ability to win sets him apart from not only dos Santos, but any opponent in the bantamweight division.

“I think that it would be a good test for me to show that I too am tough, and I have the heart of a lion. When you have two tough guys that are both willing to do whatever it takes to win, then you gotta go to skill, and I believe that I am the more skilled fighter.”