"The amount of talent in this division is unbelievable and I’m very excited to get to work in this weight class." - Mike Wilkinson 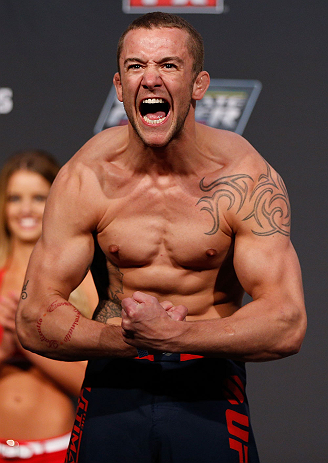 While there are other ways to describe Mike Wilkinson’s fighting style, those three words are as close to center as it gets. The 25-year-old Brit brings a hard-charging, no nonsense approach with him into the cage and is dead set on making his presence known inside the world famous Octagon.

The Manchester native understands establishing himself as a force to be reckoned with in the featherweight division is going to be a sizable task, but adversity isn’t anything he’s conditioned to shy away from. After being selected to compete in The Ultimate Fighter: The Smashes, Wilkinson suffered an injury following his opening round victory that would eliminate him from the tournament entirely.

Where Wilkinson originally figured the reality show was a path to glory on the sport’s biggest stage, the setback put his dream of competing in the UFC in jeopardy. Nevertheless, the Englishman proved resilient and made the most of a second chance when he defeated Brendan Loughnane at UFC on FX 6 this past December.

“Winning the fight in Australia was unbelievable and it was a dream come true,” Wilkinson said. “All along I knew I was going to get the win; I was just waiting for it to happen. Obviously I fought Brendan and he was a friend before the fight but I was excited to get the win.”

The victory over his former housemate not only kept his undefeated streak intact, but also earned Wilkinson a coveted roster spot in the process. With his initial goal of becoming a UFC fighter accomplished, “The Warrior” will now look to fight his way up the 145-pound divisional ladder and the first step on that journey will come against Rony Jason on Saturday at UFC on FUEL TV 10 in Fortaleza, Brazil.

The 29-year-old Brazilian won the inaugural season of The Ultimate Fighter: Brazil and has been successful in both of his showings under the UFC banner. His Knockout of the Night earning performance against Sam Sicilia at UFC 153 made it seven in a row for Jason and he will be looking to extend his streak next weekend in Brazil.

Wilkinson has other plans and is focused on getting the nod any way he can.

“I think it’s a good matchup,” he said. “Rony [Jason] is a tough Brazilian champion and I’m looking forward to this fight more than any other I’ve had in my career. I’m going out there to get the victory. Fans are going to see fireworks and see me get the W.”

In addition to facing a tough challenge ahead in Jason, Wilkinson will also have to deal with the added pressure of competing in his opponent’s backyard. The Brazilian fan base has earned raves for their passion and love for the sport of mixed martial arts and their collective enthusiasm creates one of the most unique environments in combat sports.

From the opening bout on the card until the main event draws to a close, the Brazilian MMA faithful make their presence known. Wilkinson acknowledges he’ll be stepping into hostile territory, but with his focus locked on victory, everything else becomes background noise.

“At the end of the day, it is just another fight to me,” Wilkinson said. “I fought in front of a lively crowd in Australia and now I’m fighting a Brazilian in Brazil. I’m not really focused on anything but my opponent in the cage and this is just another fight for me. Getting the ‘W’ is the only thing that matters really.

“Winning means everything to me. I’ve never been a fan of losing and never will be. I want to keep winning and I have a coach who makes sure I continue to improve. He is unbelievably good and I feel I have the skills to keep winning. I believe I have the skills to keep on winning until one day I become the champion. It is the only thing that matters. Winning means everything and it is the only thing I want to do.”

After competing at 155 pounds on TUF Smashes, Wilkinson decided the road ahead would best be traveled as a featherweight. While the bout with Jason will mark his official 145-pound debut under the UFC banner, he is certainly no stranger to the weight class.

The featherweight division has experienced an incredible surge over the past year and has risen to become one of the UFC’s most competitive weight classes. With a dominant champion in Jose Aldo and a handful of potential contenders battling their way towards title contention, the 145-pound weight class has proven depth up and down the divisional ranks.

Competing at featherweight is where Wilkinson feels most comfortable and he’s eager to start climbing the divisional ladder.

“This will be my UFC featherweight debut and I felt it was the better weight for me,” Wilkinson said. “It is where I wanted to compete at going forward. The amount of talent in this division is unbelievable and I’m very excited to get to work in this weight class.”