"I just want to make a name for myself. I am going to be a world champion. If you dig deep and if you want something badly you can get it.” - Mike Wilkinson 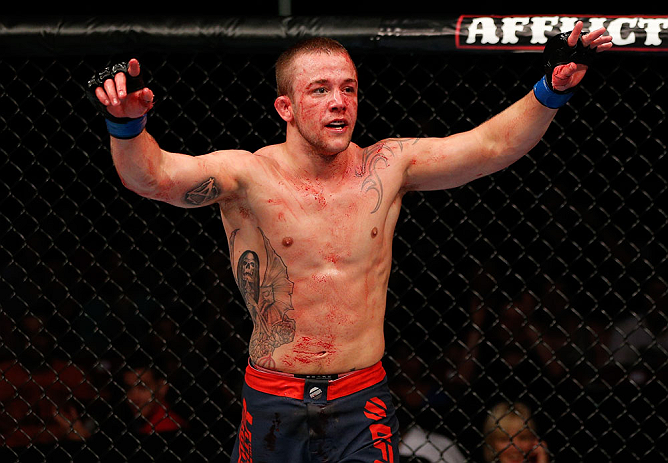 When it comes to upsets at UFC®: Nogueira vs. Werdum, England’s Mike Wilkinson may well go overlooked as a potential party spoiler, but the 25-year-old has ambitions way beyond a showdown with The Ultimate Fighter® Brazil winner Rony Jason on Saturday.

Wilkinson knows he has a passionate crowd to silence in Fortaleza, Brazil, where Jason will attempt to extend his unbeaten UFC record to 3-0. The home fighter is coming off a Knockout of the Night victory over Sam Sicilia in his last outing, and through his run to glory on TUF® Brazil has developed an army of followers to intimidate his weekend rival.

By contrast, Wilkinson’s own experience on TUF: The Smashes proved a more hazardous road after injury cost him a place in the semi-finals. As a result, his solitary December victory over Brendan Loughnane leaves the 25-year-old as the less heralded of the two fighters ahead of the weekend, yet Wilkinson is convinced he will change that inside the Octagon®.

“I just want to make a name for myself. I am going to be a world champion,” Wilkinson told The Telegraph. “I’m just an average lad from a normal town, there’s not many people who do things out of my area.

“I would like to put Leigh, as in where I’m from, and Atherton on the map, and just prove that any normal lad from a normal background can make their dreams come true. If you dig deep and if you want something badly you can get it.”

Relentless, pressurising and suffocating are all words to describe Wilkinson’s catch-wrestling style, and he draws his own comparisons to a man who has already worn UFC gold. For the Brit, former lightweight champion Frankie Edgar has set the blueprint for how hard work can take an individual to the top, and Wilkinson plans to apply the theory to the featherweight division.

“I’m a big fan of Frankie Edgar. He’s a small guy like myself and nearly all of his fights are at lightweight. He’s got a big heart like myself and I’d like to follow his footsteps because he’s a good ambassador for the sport and he’s a true warrior.”

Wilkinson is also playing his part in growing the sport of MMA in England, currently helping Widnes Vikings rugby league team by teaching them MMA-based training methods. As awareness grows, he firmly believes most sports teams will be desperate to adopt techniques used by his peers in the UFC.

“I think there is [a use] for all contact sports, including American Football,” he said. “In rugby union, you could use wrestling and MMA skills. Defensive coaches definitely like what MMA can do for their players.

“We’re actually coaching Widnes Vikings rugby league team. We teach them on a weekly basis and obviously they’re a good team. They’re in the Super League but since they’ve been training wrestling with us it has brought their game on and they’re winning more games.

“It’s much more about technique than pure strength. Obviously the players have been a lot bigger than us but we’ve just manhandled them, and we’re smaller. They have come to respect it as they have begun to understand the art of wrestling."

Wilkinson actually gave up a potential career in rugby to take up MMA, and Saturday’s fight with Jason is just the next step in justifying his decision: “I felt like I was destined to do something significant in sport, so I found a local MMA gym, did that on and off and then obviously I quit work and went at it full time. I’m glad that I did because here I am today, unbeaten [8-0], and in the UFC.”