Mike Trizano Has Some Statements To Make

Momentum is a term that gets thrown around all the time in sports, and research evidence supports that athletes very much believe in its impact.

In stick-and-ball sports, momentum can be easier to come by, either in an individual game or the season as a whole because opportunities are plentiful and if things don’t go your way in a particular at-bat, trip down the field or game, another is sure to come soon enough. 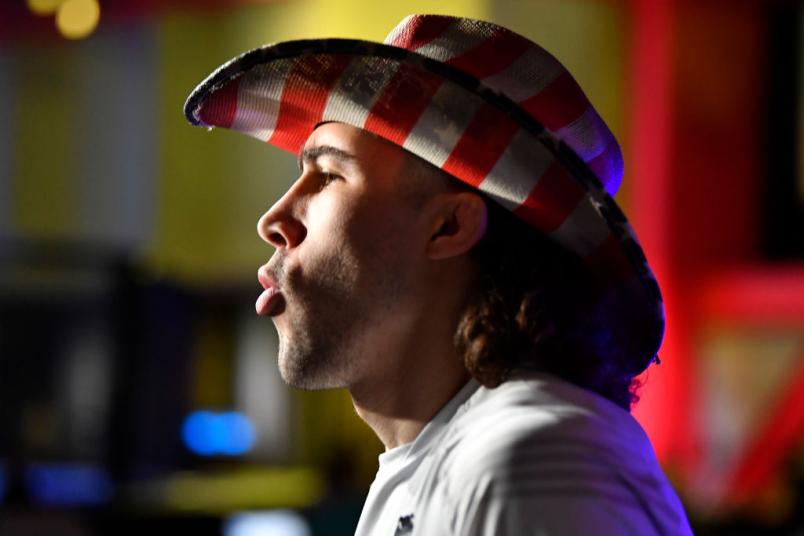 Michael Trizano prepares to fight Ludovit Klein of Slovakia in a featherweight fight during the UFC Fight Night event at UFC APEX on May 08, 2021 in Las Vegas, Nevada. (Photo by Chris Unger/Zuffa LLC)

Athletes in those sports are able to stay active and engaged, and whether they’re trying to build or maintain momentum, the next opportunity is either the next possession or next game away.

But it’s different in mixed martial arts, where the time between appearances varies and competitors can spend longer than they’d like waiting for the chance to build off their most recent victory or get the bitter taste of defeat out of their mouths.

“I always wanna try and stay active,” said Michael Trizano, who returns to action this weekend against Lucas Almeida, looking to rebound from a loss to Hakeem Dawodu in February. “I’m not getting younger, I want to make the most of my career and opportunity, and being able to fight every three, four months is what I would like to do, barring any other circumstances.

“I’m getting to do it now, with fighting in February and fighting in a couple days, and I want to get another one or two more in after this.”

Upbeat as he is heading into his second fight of 2022 and second appearance in five months, it comes after a pair of “longer than ideal” stays on the shelf for the man who won the lightweight competition on Season 27 of The Ultimate Fighter to kick off his UFC career.

After suffering the first loss of his career to Grant Dawson in May 2019, Trizano spent basically two years on the shelf, dealing with two knee operations, a nasty ankle injury, and a bout with COVID. He claimed a victory in his return against Ludovit Klein, but then went nine months before stepping in with Dawodu in February after a bout against Chas Skelly in October fell through. 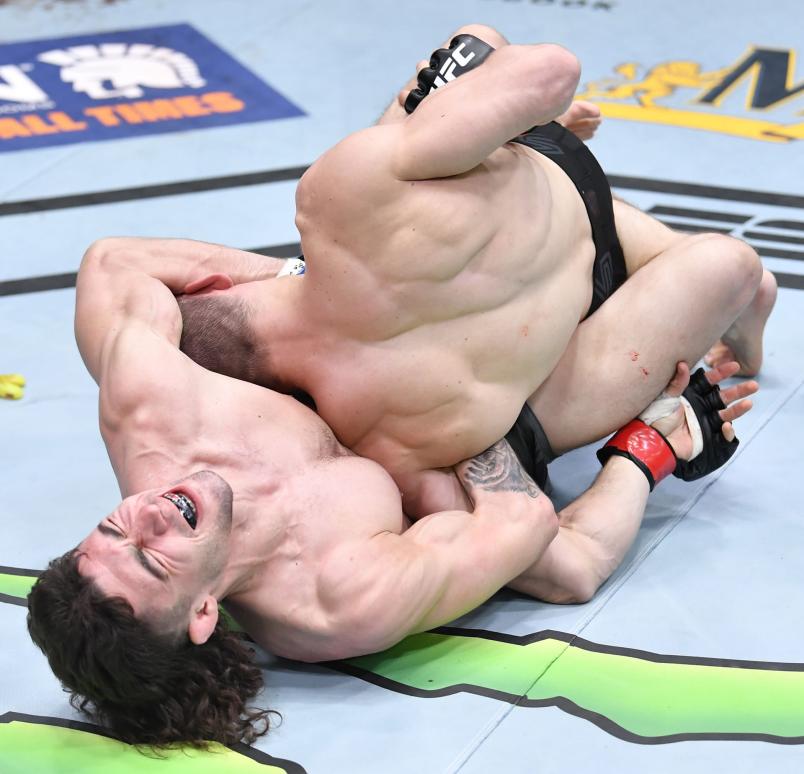 Michael Trizano attempts to secure a guillotine choke against Ludovit Klein of Slovakia in a featherweight fight during the UFC Fight Night event at UFC APEX on May 08, 2021 in Las Vegas, Nevada. (Photo by Chris Unger/Zuffa LLC)

While he’s shaken off the rust from his two-year stint on the sidelines over these last two outings, Trizano points to increased activity as the key to righting the ship and starting to take consistent positive steps forward in the featherweight division.

“Naw, ‘cause I fought a couple times already after that,” he said when asked if there was any lingering physical hangover from his extended absence. “My last fight was obviously February, but before that, it was May, and I wanted to get another fight in between the May and February fights, but it ended up falling through.

“It’s just about activity,” he added. “I need to keep the momentum going like we’ve been talking about, and not be sidelined too long.”

Everything You Need To Know About 'Road To UFC'

Fighting regularly isn’t the only way activity can be crucial to Trizano’s future success, though.

In the fight with Dawodu in February, which resulted in scores of 30-27 across the board for the striker from Calgary, Alberta, Canada, the 30-year-old Team Tiger Schulmann representative landed at a good clip, connecting with 52 percent of his punches according to the UFC Stats website.

The problem, however, is that while his hit rate was higher, his overall output was too low to keep Dawodu from coming forward and dictating the action, with “Mean Hakeem” ultimately landing twice as many significant strikes as Trizano over the course of the 15 minute fight.

“Yeah, I definitely need to be a lot more active, and that’s what I’ve been working on, so hopefully we put that together,” said Trizano, quick to acknowledge his output was too low against the talented Canadian. “That’s always the game plan, (and it comes down to) putting all the work in in training, because whatever you do in training is what you do out there, so I’m constantly working on that in the gym.

Along with getting to make a relatively hasty return to the Octagon this weekend, Trizano is one of those competitors that never seem to get too down when things don’t break his way. He’s like a baseball player in that way, seeing the fight with Dawodu as an at-bat where he struck out, and this weekend’s clash with Almeida as the chance to get up there and take another swing.

“The Hakeem fight, I went for the opportunity to fight somebody who is right by the Top 15,” said Trizano, who carries an 10-2 record into this weekend’s main card assignment. “It didn’t go my way, but that’s life, and you’ve just got to bounce back; get back up and try harder.”

Almeida is a new addition to the UFC roster  — a 31-year-old Brazilian that suffered the one and only loss of his career last fall on Dana White’s Contender Series. That bout against Daniel Zellhuber clearly made an impression with the UFC, and after returning to the regional circuit and the win column two months later with a first-round submission finish, Almeida received the call to the Octagon to face off with Trizano this weekend.

“I didn’t know anything about him,” Trizano said of Almeida, who made his professional debut in 2014 and sports a 13-1 record heading into Saturday fight card. “I watched some film — he’s a tough dude, but there are no easy fights, and I’ll fight anybody.

“I put a game plan together with my coaches and I’m just going to go out there and execute it; pick him apart with my striking and show that I’m at a different level.”

And after that, it’s pretty straightforward.

“Just a win and keep winning,” said Trizano. “Get a streak going and get a couple finishes; I need to make some statements.”

Activity and momentum; that’s all anyone needs.