"Two and a half years, three full fight camps, I’ve given everything I
can give to get this win. I just gotta go out there and do it. So
I’m gonna fight that hard on August 4th." - Mike Swick 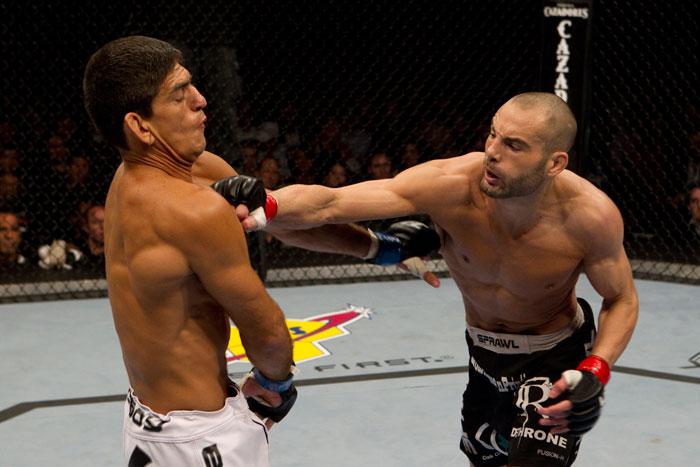 In the more than seven years since the inaugural cast of The Ultimate Fighter kicked off the mixed martial arts explosion, there has been a world champion crowned from that group, several title fights, and many more epic battles that will have their place in Octagon lore.

But the fight game is an unforgiving one, so no one fights forever. The season’s opposing coaches, Hall of Famers Randy Couture and Chuck Liddell, are both retired; competitors Kenny Florian and Nate Quarry have joined them, and both Stephan Bonnar and Forrest Griffin have hinted that the end of their careers will come sooner rather than later. Josh Koscheck and Diego Sanchez are still sitting in the upper reaches of the welterweight division, and Chris Leben remains active in the Octagon, but perhaps the most intriguing member of the group is the one who hasn’t fought since February of 2010, the man returning to active duty this weekend against DaMarques Johnson.

He doesn’t sound like he’s kidding, and if he was, it was only half-so. But Swick has given up on bold proclamations and looking too far ahead. After a two and a half year struggle with injuries and an esophageal issue that have kept him out of action, he’s really just happy to be able to fight again.

“Two and a half years, three full fight camps, I’ve given everything I can give to get this win,” said Swick, referring to his camps for aborted bouts with David Mitchell and Erick Silva, as well as the camp he just concluded for Johnson. “I just gotta go out there and do it. So I’m gonna fight that hard on August 4th.”

One of the UFC’s most popular fighters, Swick had an impressive 5-1 run at middleweight before dropping to 170 pounds after a UFC 69 loss to Yushin Okami in April of 2007. Six bouts followed at welterweight, but with the exception of blistering finishes of Jonathan Goulet and Ben Saunders, he didn’t look like the same fighter he was at 185. Turns out that his often misdiagnosed and misread esophageal ailment was not only keeping him from fighting at his best, but it was making his life a living hell. So after back-to-back losses to Dan Hardy and Paulo Thiago, he took the time he needed to figure things out.

By January of last year, he was scheduled to return, but when Mitchell pulled out of their fight due to injury, Swick followed suit, opting to take more time to get back to a hundred percent. A UFC 134 matchup with Silva was next on the docket, but this time a knee injury put the Texas native back on the shelf. Finally, on Saturday, he’s healthy and he’s back, looking for his tenth UFC win and not tempting fate, so no walking under ladders or letting black cats cross his path.

“I’m taking every precaution available,” he laughs. “It’s a wonder I didn’t get hurt in this fight camp. I tried to be as smart as I could and I took precautions where I could, but I was extremely motivated so I really pushed myself hard and got into amazing shape.”

As for his medical prognosis, “It’s always gonna be there,” said Swick. “I guess it could go away at any time from what they’re saying, but I figured out how to deal with it and how to treat it and how to still get the nutrients that I need. So now I’m able to get all the nutrients, all the protein and all the food that I need, considering how many calories I’m burning for my output, to be healthy again. Whereas for the last four years of fighting at welterweight I was malnourishing myself, avoiding all these foods, I didn’t know which other foods I could eat, I was taking all these prescription pills and trying all these experimental procedures and operations, so it was real tough to try and be a professional athlete and fight and still do all that at the same time. Now I have my diet, I know exactly what I need to eat and how much of it, and it’s working great. I feel amazing, I’m sleeping, I’m getting the nutrients, I’m feeling big, strong and fast, and I think this is gonna be my first true fight at welterweight.”

In many ways, the welterweight division has a similar look to it as when Swick left, at least in terms of the man at the top, Georges St-Pierre. His longtime buddies Josh Koscheck and Jon Fitch are also still plugging away, Carlos Condit has traveled up the ladder to become interim champ. As for the six fighters Swick faced at 170, only two (Hardy and Thiago) remain in the organization. That makes his comeback one that many may look at as a rookie campaign and not as the resumption of a career. And he’s okay with that, as he feels like a young 33 heading into Saturday’s bout.

“I think in a way I’ve preserved a lot of my health while dealing with my health,” he explains. “Over the last two years I’ve not taken any damage to my body or head in a way that eight or 12 fights would have done. Even though I had to miss out on all those fights, I feel like I did kind of preserve myself, and now I feel like I’m coming back more healthy than ever. And I think what you look at when you see if somebody’s getting old or washed up is their speed and their mentality. I think those are the two things that really change – they get slow, and mentally they’re just not motivated. Those are better than they’ve ever been – I’m faster than I’ve ever been, I’ve worked speed non-stop for two years, and I’m more motivated and hungry. That fire that used to burn is even bigger. So I’m definitely far from done, and I think this is a whole new beginning for me. You have those new guys that come in and they put on this incredible performance, and you’re like ‘wow, this guy’s got a lot of potential.’ I want to put on a performance where it shocks people, but at the same time I’m one of the old school guys who’s reinventing himself and coming back stronger.”

Luckily, he’ll have a willing dance partner in Johnson, a former TUF competitor who has not seen one of his eight UFC fights, win or lose, go to the judges’ scorecards.

“I don’t know exactly what his strategy will be, but from what I’ve seen in his previous fights, I love this fight,” said Swick of Johnson. “I love how he pressures and comes forward, he looks for the finish, and he’s not a boring fighter. He’s not gonna try to hang on to me or win a decision, and I think it’s gonna be a great matchup for the fans.”

More importantly, it’s going to be a great matchup for Swick, who hopes to have the opportunity to show the fast hands and knockout power that earned him the nickname “Quick” back when he was a young gun with championship dreams and the talent to back them up.  Sure, he’s stayed busy visiting US troops overseas, welcoming a daughter into the world with his wife, and building up his various businesses. But this is where Mike Swick belongs. And he knows it.

“It feels good,” he said of his return. “I have a purpose again. It’s been great being a fan for the last couple years, but I’m a fighter, so it’s hard sitting on the sidelines and just being a fan when that was my job and I’ve already had 12 UFC fights. To sit there and watch that many shows go by and not fight, it’s really tough. But everyone’s been super supportive and everywhere I go, people come up and shake my hand and show support and they’re excited for my return. So it makes me feel good to know that I haven’t been forgotten.”