"I think Jon has better ground and pound and that I’ve got better submissions. I think it will be a good fight." - Mike Russow 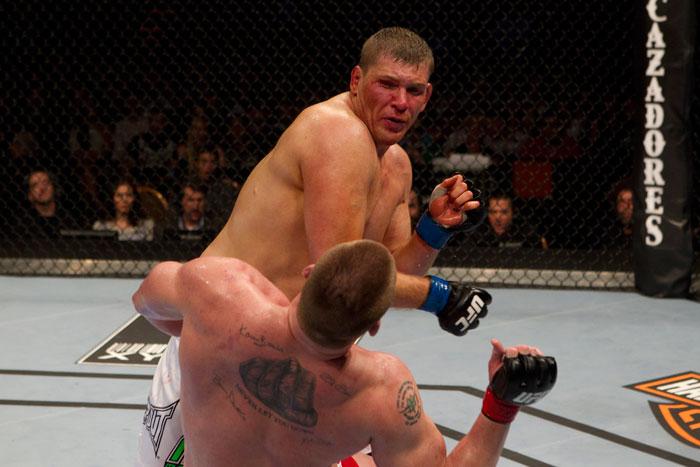 Mike Russow, the man who staged one of the greatest comebacks in UFC history, recently made this startling admission: “I’ve never sat down and watched the whole fight.”

The 34-year-old Chicagoan is referring to his May 2010 bout against then unbeaten-Todd Duffee, the heavyweight phenom who made a punching bag out of Russow for the contest’s first 12 and 1/2 minutes before a booming right hand stunned everyone inside Las Vegas’ MGM Grand Garden Arena and rendered The Next Great Thing out cold on the canvas.

Reflecting on what many consider the signature win of his career, Russow (13-1, 1 NC) struck a relatively somber tone, sounding more like the guy who lost the fight.

“I was real disappointed with that fight. I wasn’t happy at all,” said Russow, who will put a nine fight win streak on the line March 26 against Jon Madsen at UFC Fight Night in Seattle, Washington. “I really don’t even like to think about it (the fight with Duffee). There’s nothing good about it until he put his hands down and I caught him with the right hand at the end. That and the fact that I can take some punches. Duffee hits pretty hard. But as the rounds went on he was getting tired and his punches had less steam on them.”

Russow’s self-criticism is even more pronounced when one factors in that he broke his left arm in the first round blocking a Duffee kick.

“I still threw punches with it,” Russow said, who indicated that Duffee may have slept on his right hand because he rarely threw it in their battle (hesitation prompted by the lingering after-effects of an elbow surgery).

Following a 10-month hiatus from the Octagon – time he utilized to heal up and also exchange wedding vows with his wife – Russow is returning to battle a familiar foe. Russow and Madsen have occasionally trained together at Brock Lesnar’s Death Clutch gym in Minnesota. The nexus between the two men is Rodrigo “Comprido” Medeiros, the world champion Brazilian Jiu-Jitsu black belt who trains both Russow and Lesnar.

“I like Jon, he’s a great guy. But my manager Monte Cox said ‘This is who you got.’ The UFC says you gotta do it, you gotta do it,” said Russow, a former Division I wrestler who competed for Eastern Illinois University, the same alma mater as welterweight legend Matt Hughes.

“Jon is a good fighter. Our wrestling is a lot alike. I think John has better ground and pound and that I’ve got better submissions. I think it will be a good fight. I think our wrestling skills will cancel each other out and a lot of the fight will be on our feet.”

It has been almost a year since Russow and Madsen last trained together. Russow has, however, ventured to Las Vegas and trained with Medeiros and Lesnar, who were filming The Ultimate Fighter season 13. The vast majority of Russow’s camp has been in Chicago, where he has worked for the city’s police department for eight years.

“The most adversity I have,” he said, “is working 10-hour shifts and juggling that with training.”

Russow said he is assigned to police some of the most dangerous parts of Chicago’s southside.

“I’ve been involved in foot chases, car chases … I’ve been shot at,” he said. “In police work everything happens when you least expect it.”

Kind of like the right hand that knocked out Todd Duffee.