Mike Rodriguez Focusing On The Process

Mike Rodriguez knows that success in the Octagon involves a lot more than just the day of the fight
By Thomas Gerbasi, on Twitter: @TGerbasi • Aug. 18, 2020

As the fourth season of Dana White’s Contender Series rolls on in Las Vegas, one of season one’s contract winners finds himself at the crossroads as he approaches his Saturday bout against Marcin Prachnio.

But three years after stamping his ticket to the UFC first-round knockout of Jamelle Jones, light heavyweight Mike Rodriguez is fueled by the blunt New England honesty that got him to the big show in the first place. In short, he knows where he’s been, he knows where he’s at, and he knows he has the tools to get where he wants to be.

“It’s been a rollercoaster,” he said of the last three years. “A lot of ups and downs. I lost to Devin Clark, beat (Adam) Milstead, and had those two losses. I've gotta get this taste out of my mouth. I don't like losing. I'm not a loser. It bums me out to lose.”

Technically, Rodriguez didn’t lose his July 2019 bout to John Allan, as the unanimous decision defeat was overturned to a no contest after Allan failed a post-fight drug test. So at least he’s officially 2-2 with 1 NC in his last five. That’s not good enough for the 31-year-old, who knows what happened on fight night, a defeat to Allan followed a knockout loss to Da-un Jung last December. As far as he’s concerned, while the world wants to dump 2020, he’d be happy to dump 2019.

“I had a lot of distractions last year,” Rodriguez said. “I was going through a lot of personal stuff and now all that is over and done with, everything's fine, and now I'm getting back in the saddle and continuing to work. I don't do well when my personal life is in shambles.”

It’s the part of the fight game that doesn’t get discussed too often, and it may be the hardest part to control in order to get right for 15 or 25 minutes. Rodriguez won’t argue that point. 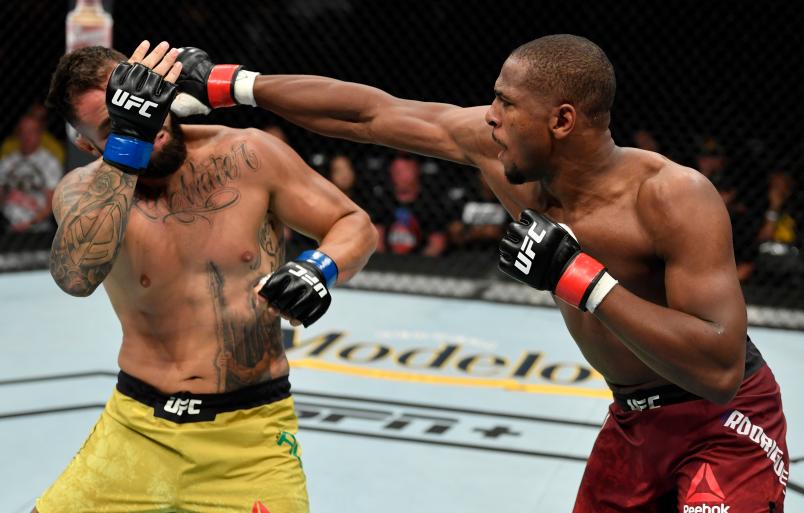 “It’s not necessarily the fight itself,” he said. “I think the preparation for the fight, the process to the fight, gets affected. So eventually you get a s**tty result in the fight if your process wasn't up to par. And that's what happened with me in those last two fights. I just was not there. I know what I did in training. I didn't give it my best. It wasn't my priority. My priority was whatever else was going on versus me smartening up and getting my stuff together. Now, it's different. I'm very motivated and pushing to do the best I can possibly do out there on August 22nd.”

He's not just saying it, either. Rodriguez could have come back earlier, but getting the victory in this one means so much that he’s going all-in when it comes to prepping for the Poland native. Even his go-to video game, Rainbow Six Siege, has had to take a back seat to training and family time.

“I've been so busy with training and by the time I get home, I'm beat,” he laughs. “I chill with the kids and then I just go to bed. Or if I do play any games, it will be a single-player thing because I'm not trying to get too competitive right now.”

He’s saving that for the gym, and ultimately, what may be the biggest fight of his career since his Contender Series bout in 2017.

“It's awesome that guys can go back-to-back to fight, but after taking two Ls back-to-back - one's an NC, but I still feel like I lost the fight - you gotta go back to the drawing board to regroup,” he said. “Okay, let's see what strategy we can run this time around versus what we ran before, and just try to change things up. Granted, I would like to fight back-to-back, but I just needed to sit back and re-evaluate, especially with me knowing I'm at the risk of getting cut if I lose this fight. I just wanted to focus on rebuilding myself even better as a fighter, and now I'm ready to test it out.”

December 2018. It was the last time Mike Rodriguez got his hand raised in the Octagon, as he scored a second-round TKO over Adam Milstead. For a competitive athlete, that’s much too long, but not for the reasons you may think. Sure, South Easton’s Rodriguez wants to make money as much as the next guy, but winning means something else for him, something he struggles to find the words for to make us understand, but ultimately does.

“The winning just feels good, the fact that you worked hard for something to finally see it all unfold into victory,” he said. “It's a beautiful thing. I have a couple friends who paint, and the way they feel after they're painting a full picture is the same feeling we get when we win. I think the only thing that ever came close to winning a fight was having my kids. It's a magical feeling.”