"I'm trying my absolute best to get better and better with every single
fight and if I have an opening then I'm going to finish him." - Mike RIo 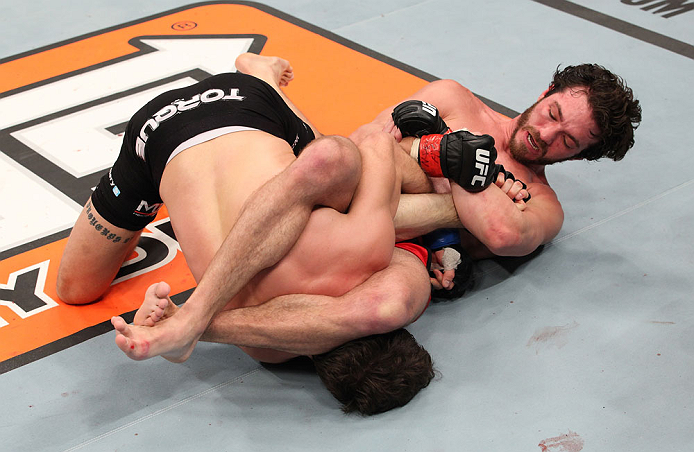 “Just when I thought I was out... they pull me back in.” - Michael Corleone

This may come as a shock, but not every wrestler’s dream is to become a cagefighter. Many of these athletes who have made the transition from the college mats to the UFC’s Octagon never expected a pro career in this multifaceted sport. They hang up their shoes and singlet in search of a simple life without the endless grind to improve or the laundry list of injuries that follow. That’s all well and good until that tamed animal gets lured back to its natural habitat - a gym - and they get the taste for competition again.

“After college wrestling, I came back to Miami and I was like I'm done - I don't want to be athletic again,” remembers Rio. “I've been athletic my entire life. I've never been a normal guy and I just want to be a normal guy with a 9-5. It didn't really work out as planned. I didn't get that 9-5 I wanted and ended up working security in the nightclub industry. But I did get a job and I did my thing. Then two old school friends of mine that I used to watch wrestling with in high school kept telling me to come to the gym. I blew them off for months. I told them I didn't want to fight, I didn't want to train. But they got me to the gym one day and that was that - I started fighting.”

All it took was an afternoon of sharpening his claws at a nearby fight academy and Rio was hooked. The wrestling standout from Lindenwood University began training and tangling full-time in Florida’s local MMA circuits, rattling off an 8-1 record between 2008 and 2011. From there, “The Wolverine” caught wind of a tryout for The Ultimate Fighter and successfully made it onto the 15th season. While two injuries (knee, ribs) in the house sidelined him for much of 2012, Rio made his Octagon debut in December at the TUF 16 Finale with a head-turning third round armbar submission win over castmate and fellow college wrestler John Cofer.

“The thing about the Cofer fight, he's a friend of mine,” tells Rio. “We got along great on the show. The hardest part of that fight was putting myself into the mental state that I had to go out there and beat him. That was the hardest thing to do. It's what we do though, it's our job. Trying to put yourself into the mental state that you need to be in to win a fight is all a part of the game. I knew for a fact that he was a banger; a wrestler who likes to stand and bang. I also knew that he wasn't a guy who was easy to put away. He's a tough SOB. I knew it was going to be a war, so I was prepared for a war.”

It was a tale of takedowns, with Rio’s ground game being the deciding factor in the bout. All told, “The Wolverine” shot for 11 takedowns in the near three rounds, clearly not being shy about his intentions. In the opening round, Rio was only scored on one attempt and got caught underneath Cofer in the closing moments. Round two, he landed consistently with a jab and took his opponent’s back briefly. The final five minutes would determine the victor, but Rio wasn’t in a hurry to hear any scorecards read.

“I personally thought it was one and one at that moment, but I forced myself to think that I was losing two rounds,” reveals Rio. “I wasn't going into that third round thinking hopefully I get the decision. I put myself into that situation thinking that I was losing the fight and no matter what I had to go for the finish. I was taking a little bit of a beating on bottom because I was going for that submission. The first one didn't happen and I was like, 'Damn it! That was my opportunity and he's not going to give me another one.' I got lucky enough to find another situation to go for another one and when I got it I knew there was no way I was going to let go of it. And I just cranked on it.”

In a matter of moments, Rio lost the fight winning armbar to then recapture Cofer’s arm with less than a minute remaining for the debut W. “There was so much stress on that first fight because it was my first fight in the UFC on that big stage, it was my first real fight on TV, it was a situation where if you lose you are out of the UFC, and I was fighting my buddy,” says Rio, whose victory was understandably bittersweet in taking an impressive win over a friend. “The second it was over, I felt relief. The second after that, I thought, 'Crap, John lost.' I know if he had beaten me he would've felt bad too, but it's our job.”

Up next for the 31-year-old Rio is a nine hour plane ride to Jaraguá do Sul, Brazil to tangle with home favorite Francisco Trinaldo at UFC on FX 8. The 12-2, former kickboxer actually made his way into the UFC by fighting at middleweight on the first season of TUF: Brazil. Trinaldo went on to win his first fight inside the Octagon at 185 pounds before dropping to 155, where “Massaranduba” has gone 1-1 since, including an arm triangle choke over C.J. Keith in January.

“As a fighter, I hear he's extremely aggressive,” states Rio. “He has dynamite in both hands and he's going to go 100% after you. One of his nicknames I've heard is the ‘Hector Lombard of the lightweight division’. I'm preparing for a really big, explosive guy who won't back up a single step. It's going to be a really, really good fight. I like fighting guys who are game. I won't ever be considered the best if I don't fight guys who are going to give me a go. I want to fight the guys that I'm expected to lose to every single time. That's what I want. In wrestling, I was used to being the guy who was always going to win. Knowing that I'm going into his backyard, a shark tank, it's going to be a first time for me to be booed by an entire stadium, but I'm looking forward to being booed (laughs). Being the underdog, that gives me the fire.”

To prepare for Trinaldo, the Cuban-American is sticking to South Beach for all his training needs. Rio’s home gym is at Zen Jiu-Jitsu in Miami with BJJ and taekwondo black belt Enrico Cocco. The two oversee their own team of up-and-coming amateur fighters, delightfully named the “Zen Jiu-Jitsu Death Squad,” who Rio hopes he can coach through the ranks, into the TUF house, and into the Octagon like his own journey. “The Wolverine” is very proud of the city and area he comes from and would love to see it turn into a hotbed for MMA talent.

“Miami is blowing up,” asserts Rio. “Southern Florida's got the Blackzilians and ATT in Coconut Creek, but just in Miami, my stomping ground, we've got four guys representing in the UFC. Me, Alex Caceres, Yoel Romero, and Jorge Masvidal. We're trying our best, doing our thing, and bringing a positive image to the world that Miami is more than just a bunch of ‘put it on Youtube’ guys. And, it's funny because a lot of those Youtube guys are serious fighters who train with us almost every day.”

Lastly, a day’s work is only half done when Rio leaves the gym, as “The Wolverine” sinks his teeth into an even greater role: charity spokesman. The specific charity is Autism Speaks, which was founded by former President and CEO of NBC Universal Bob Wright and, his wife, Suzanne Wright. The cause is a personal one for Rio, as his younger brother, Steven, is autistic. With his own strength and help from a very supportive family, Rio’s brother has accomplished a lot and is an inspiring story for others with the disorder. As Rio grows with popularity in the UFC, he is bringing the same competitive edge for sports to spreading awareness and raising money for this cause.

“Autism affects me because my little brother Steven is autistic,” explains Rio. “He graduated high school, he got a full-ride to college, and he's doing everything he has to do to be independent. My mom never let him use autism as a crutch and he's grown from that. He's super awesome and he's a part of the community. He doesn't let autism beat him. That's my situation with autism. Having a soft spot for it, I tried to become one of the spokesmodels for the Autism Speaks organization and they were all for it. I did my first Autism walk, which I did last month and it went great. We had our little team together. Don't get me wrong, the next one will be way better. This was my first one and my next one I'll be way more organized. I'm trying to get people aware of the situation with autism. I'd love to get a cure for it, but, at least, get more teachers or more schools that really understand the situation with these kids.”

On May 18th at UFC on FX in Jaraguá do Sul, Brazil, two lightweights will collide as “The Wolverine” will be tested in unfriendly territory by the heavy-handed Trinaldo. “I expect every time we hit each other that fireworks will go off,” affirms Rio, who believes he will rise to the challenge to represent himself, his family, his hometown, and his wrestling credentials, as a rising lightweight contender. “I'm expecting a war, but if I get an opportunity to knock him out or submit him in six seconds then I'm going for that finish. I'm trying my absolute best to get better and better with every single fight and if I have an opening then I'm going to finish him.”